Factory tour at CZ (Česká Zbrojovka): an insight into the development, technology and manufacturing of innovative firearms for civilian and military markets 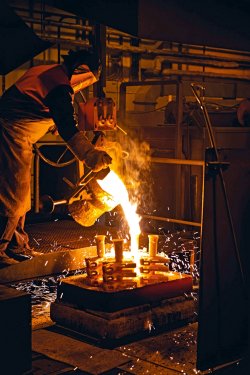 © CZ
Traditional craftsmanship: new frames for CZ pistols are produced in the foundry.

CZ (Česká Zbrojovka) has always been part of the national risk prevention system of the Czech Republic. This can still be seen in the architecture: many widely spread and rather flat buildings used to protect against spying and attacks from the air. A walk across the long factory premises also shows that tradition and modernity are successfully combined here. The buildings largely correspond to the architectural style of the 1930s. Seen from the outside, however, they appear rather as civil buildings. However, they conceal a modern machine park of the latest generation that can manufacture both civilian and military products.

It is impressive how efficient the traditional Czech company presents itself. Around 1700 employees work here in the southeast of the Czech Republic near the border with Slovakia, transforming steel and other raw materials into high-quality service, sports and hunting guns.

If you enter the individual production facilities in the buildings, you will come across traditional craftsmanship in addition to the latest technology. These include, for example, smelting furnaces in which frames are cast with the help of previously manufactured clay molds. CZ also has its own efficient barrel production facility – the barrels are cold-hammered. The final assembly is done by hand. Each product then passes test firings before it is sent for final cleaning and then for worldwide shipment. In total, the CZ catalog includes around 500 different products. It exports to almost 100 countries in all continents. 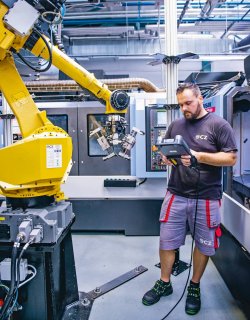 Founded as a state-owned firearms factory, the company is now privately owned and is part of the CZ Group. The company follows a modern management philosophy and also sets new impulses in marketing and sales. This can be seen at a glance from the company's website and its presence in the social media. The team also broke new ground in public relations. When the press conference planned for the IWA OutdoorClassics 2020 gun show had to be cancelled due to Corona – like the entire show – the team quickly offered an "alternative date": online, via webinar. The highlight of this webinar was without doubt the latest CZ P-10M micro-compact pistol, which complements the successful striker fired pistol family

Only recently CZ has strengthened itself with a prominent representative of the industry. Franz von Stauffenberg joined the CZ team as Sales Manager Western Europe. The 44-year-old paratrooper reserve officer has a wealth of experience in the industry. In recent years, he has built up the German law enforcement division at SIG Sauer in Eckernförde and was previously also active in Heckler & Koch and Rheinmetall. The family man and passionate hunter also brings expertise from the field of security consulting. His sales team will grow in the coming months.

Česká Zbrojovka's role as the backbone of national security 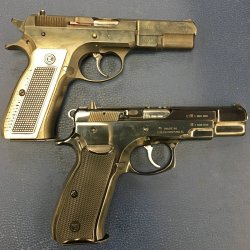 Dr. Jan-Phillipp Weisswange
The first and the one millionth CZ 75 – the sturdy and legendary pistol is one of the most successful 9-para pistols ever.

On account of its history as a state weapons factory, the small and fine sample collection at the company headquarters contains some unusual pieces. Among other things, the aircraft LK30 machine gun was manufactured in Uherský Brod. During the Cold War, Czechoslovakia also relied on its own weapons technology expertise. CZ developed a complete design of its own, the vz. 58 assault rifle, and no other Warsaw Pact modification of the Avtomat Kalaschnikova (AK) was issued to the Czechoslovakian armed forces at that time. Other world-famous products of this era include the Scorpion vz. 61 submachine gun – one of the first personal defense weapons ever – or the CZ 75 pistol, which has long been considered a classic in the field of handguns and on the basis of which countless pistols were developed. 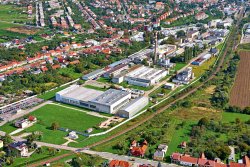 © CZ
The long CZ factory premises fit into the cityscape of Uhersky Brod. As you can see, there are plenty of green spaces around it.

While shooting and hunting guns were still part of the catalog, the production of the vz. 58 assault rifle ended in 1982 and almost three decades later CZ re-entered the military weapons sector. In 2010, the sturdy CZ 805 Bren 1 assault rifle was introduced, followed a little later by the modernized Bren 2. Both weapons are now in the arsenal of the Czech and partly also Slovak armed forces.

CZ also offers modern service pistol families, both hammer fired (CZ P-07, CZ P-09) and striker fired (CZ P-10). The catalog also includes the Scorpion Evo submachine gun (in 9 mm Luger). CZ sold its modern range of handguns to its NATO partner Hungary, too. In March 2018, the decision was made to modernize the handgun inventory with CZ products. However, Hungary attaches great importance to know-how transfer and in-house production. Thus, the CZ Bren 2 assault rifle, the Scorpion Evo submachine gun and the P07 and P09 hammer-fired pistols are built under license. Overall, armed and security forces from over 40 countries currently use CZ weapons.

Further interesting insights into CZ can be found in this video: 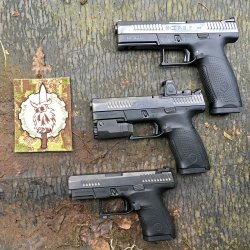 CZ has achieved great commercial success with its P-10 family. Currently three sizes of the rugged and ergonomic striker fired pistol are available: F for "Full Size", C for "Compact" and S for "Subcompact". Common to all models is the polymer grip with interchangeable backstraps and the slide stop lever that can be operated from both sides, as well as the slide with a coating that the company claims is extremely durable. Front and rear cocking serrations simplify loading and check operations. The magazine release button can be remounted by the user on the other side of the gun. The iron sights with self-illuminated night dots can be easily adjusted. Furthermore, there is an Optics-Ready version that accepts optics. Depending on the model, the magazine capacity is between 12 and 19 cartridges. Frames are available in different colors.

Outlook: what happens at CZ?

It was only in April 2020 that the Czech armed forces awarded CZ a framework contract worth almost 90 million euros for the supply of guns and ammunition. If the full scope of the contract is called up, around 16000 Bren-2 assault rifles, over 21000 CZ P-10 pistols, over 1600 CZ 805 G1 accessory grenade launchers and around 100 CZ Scorpion submachine guns could be delivered by 2025. In 2010 and 2016 CZ had already equipped the armed forces of its home country – 26,000 professional soldiers and 11,000 reservists – with around 40,000 new weapons. 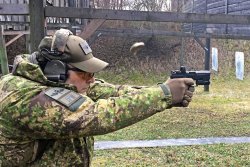 "The Army of the Czech Republic demands only the best armament. This contract is an assurance for us that we are doing our job well and create high-quality and innovative products that hold up even in the most demanding military and law enforcement markets,”  says Luboš Kovarík, President of the CZ Group. CZ's CEO Ladislav Britanák is also pleased with the order: “We are honoured to be able to further supply our army, which is historically one of the most important customers of CZ and also an important reference in world markets.” Luboš Kovarík and Ladislav Britanák also welcomed the fact that with this order the Czech government is sending an important signal of support for domestic industry and thus also for national security in times of crisis.

In May 2020 CZ was joined by the innovative gun designer and tuning specialist Hakan Spuhr from Sweden. We are curious what this means for the popular sport pistols based on the CZ-75. And so there will be a lot of news to report from Uherský Brod in the future.

For more information about the CZ company and its history, please visit the Ceská Zbrojovka website.

You can find our test of the CZ P-10 Micro here. And here we have tested the sporty CZ Shadow 2 Orange top model for you.

Subscribe to the Newsletter
This article is also available in this language:
DEIT
Click here for more information on the topics:
CZ (Česká Zbrojovka)Culture
That might interest you too: