Colt is about to be acquired by CZ – What is the background to the deal and when will it happen?

Česká Zbrojovka (CZ) from the Czech Republic has been building its business ever more broadly of late, and also appears to be on the fast track in the international government market for military and law enforcement guns. This is underpinned by recent reports that CZ is looking to acquire legendary US firearms manufacturer Colt, with the deal potentially being wrapped up as early as the end of this month.

Founded 85 years ago and employing some 1700 people in the southeastern Czech Republic near the border with Slovakia, CZ is currently extremely successful in the civilian market with the CZ-IPSC factory team featuring top shooters such as multiple world champion Eric Grauffel, as well as in-demand all-steel match pistols such as Shadow 2 and Tactical Sports 2. But even in the tough government business, modern weapon systems such as the Bren 2 assault rifle, the Scorpion EVO 3 A1 submachine gun or the P-10 polymer service pistol can win tenders. In May of last year, for example, news circulated that the Czech Armed Forces and the domestic arms manufacturer had signed a framework agreement for the supply of handguns and ammunition. This involves the delivery of up to 39,000 weapons by 2025 with a contract value of up to 2.35 billion Czech crowns (86.7 million euros). If the full scope of the contract is completed, some 16,000 Bren 2 assault rifles, over 21,000 CZ P-10 pistols, over 1,600 CZ 805 G1 mounted grenade launchers and about 100 CZ Scorpion PDWs could be delivered. CZ had already provided its home country's armed forces with some 40,000 new handguns in 2010 and 2016. Such major government orders allow CZ to invest in the future.

Big fish on the hook 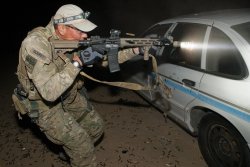 Colt designed gun technology milestones such as the M16 assault rifle in 5.56x45 mm NATO as well as its civilian version, the AR-15 self-loading rifle.

Just recently, CZ took a stake in Swedish specialist Spuhr as a new co-owner. The company is known for firearms technology solutions and upgrade systems for military weapons, but especially for its first-class optics mounts such as ISMS (Ideal Scope Mount System). Spuhr mounts are used by military and law enforcement units around the world, including the Swedish, Danish and Dutch armies, the Portuguese navy and the German police. Compared to this company investment, however, the complete takeover of the US pioneer Colt is likely to be quite a different matter. After all, Colt, along with Winchester, is probably the most illustrious and historically significant brand name in the US firearms world. Despite the 166-year tradition – the famous Samuel Colt founded "Colt's Patent Fire Arms Manufacturing Company" in 1855 – the company has had a very eventful history with different owners and insolvency proceedings. In the process, it has designed firearms technology milestones such as the Colt Single Action Army Revolver of 1873, the Colt Government Pistol of 1911 (John Moses Browning) and the M16 assault rifle of 1967 (Eugene Stoner).

Strategic orientation for the future 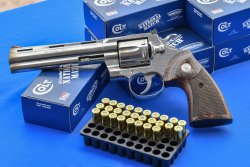 Franco Palamaro, © F.PALAMARO
As recently as January 2020, we were able to report about the resurrected classic Colt Python in .357 Magnum. It first saw the light of day in 1955 and was manufactured until 2005. Now, after a 15-year absence from the market, the legend is back and is offered in a new stainless steel edition with 4.25" and 6" barrel lengths.


Through the acquisition of Colt Holding LLC (indirect owner of the manufacturing company Colt Manufacturing Company LLC), the market presence of the Czech company, which is already well represented in the USA with its subsidiary CZ-USA, is also growing in the government sector. Through synergies, the development and production of modern service guns can be made more efficient and a very big name in the firearms world can also be used in marketing. The acquisition is also expected to enable the company to gain a stronger foothold in the government business in Western Europe. After all, the elite French police unit "Groupe d'intervention de la Gendarmerie nationale" (GIGN) recently opted for the Bren 2 from the Czech Republic rather than the HK 416 from Germany. Other defense contractors and government suppliers, such as Fabrique National (FN), Heckler & Koch or Haenel, will certainly take note of CZ's expansion. With SIG Sauer, another competitor in this arena has unfortunately closed the doors of its German production in Eckernförde. So far, only a letter of intent has been signed, but by the end of January, CZ's takeover of Colt could already be a contractual reality.

Subscribe to the Newsletter
This article is also available in this language:
DEIT
Click here for more information on the topics:
CultureCZ (Česká Zbrojovka)Colt
That might interest you too: