After years of neglect, small smoothbore gauges have regained momenum. Thanks both to the formal elegance of a properly sized receiver and to substantial improvements to ammunition and barrels 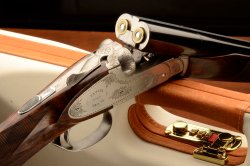 Bruno Circi
The angle of the opened barrels is quite generous, and even slowly breaking open the gun thereʼs no interference with the ejectors 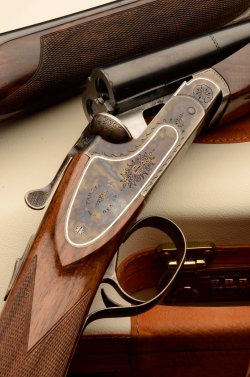 Some even say that with the .410 you can strike down pheasant at more than 50 meters. This is a benevolent exaggeration even if it may be true. The smaller sizes are made for short distances and a .410 cannot certainly be compared with a 12 gauge, even if the improvements made ​​in the boring of the barrels have led to a different behavior in the ammunition. Currently, on a shot pattern of one meter in diameter, we no longer look for the unlikely homogeneous distribution of the pellets, which, with traditional 13 g lead cartridges, would give rise to depleted shot patterns. On the other hand, if with a 12/76 gauge and a 42-gram load we have triple the amount of pellets to be distributed in the same shot pattern of one meter, it is evident that the two situations, 12 and .410, are too different to be comparable. This is where the new boring of current barrels and with consequent improvement of performance comes in. Basically, the difference is in the fact of having a non-homogeneous distribution of pellets, but that are concentrated in the central 40-50 cm radius of the shot pattern. Without proper proportions of the areas concerned and the weight of the shot charge, with the same number of pellets, the central 40-50 cm of the shot pattern of a .410 is guaranteed just like the shot pattern of one meter with a 12 gauge and 32 grams of lead.

Naturally, accuracy comes into play here. With the small gauges, the hunter must shoot straight and calculate hold off with extreme accuracy. At that point, we will see the pheasant close its wings and go down; proportionally, we will have a greater number of shots and a smaller number of injuries compared to game shot with a swarm of pellets from the customary 12 caliber. Naturally, for the same ability of the hunter and shooting accuracy, the number of shots to be fired to obtain the same number of pheasants is greater with the .410 compared to 12 gauge, because the .410 does not forgive those small errors that would be inconsequential with 32 -34 grams. But the greater yield is paid off with a greater number of wounded animals, at the expense of hunting ethics. 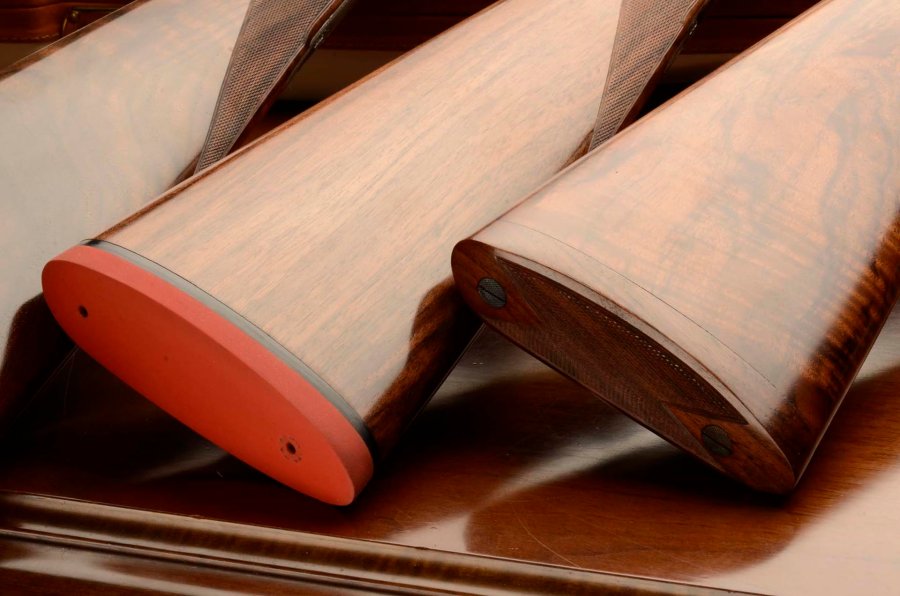 Bruno Circi
The rubber buttstock is not required by the gauge, but is aesthetically pleasant in the Grade 2 version

What is certain is that with a traditional charge of 13 g of lead and with the barrel boring techniques used up to a few years ago, the shot at 50 m was not even to be attempted. Unless, of course, the distances were roughly estimated with a lot more optimism, similar to how fishermen, boasting, estimate the size of their last catch, fished from the water the size of  anchovies and immediately turned into tuna, if not marlins, in fishing stories.

Without exaggeration and with much attention to the hunting results, the Fausti sisters have a long tradition with small gauges, which are to be praised, because, they manufacture double-barreled guns in Marcheno. The double-barreled gun is a difficult gun, which does not allow for shortcuts, because a length wise stress tendency is added to the rotary torque typical of break action guns. 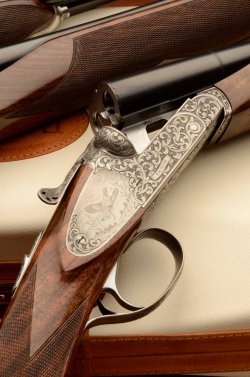 The first barrel pulls the gun to the right and the other to the left. The design of the double-barreled guns has been encoded for more than a century and does not allow for formal uncertainties, especially in small and very small gauges, because there is the need to create an elegant and small receiver, appropriate to the gauge, to avoid creating an ugly gun that would be too unpleasant to bear. This is not only about reducing the proportion and percentage of the size of a larger gauge, you need to know exactly what you are doing.

The difficulties increase if the double-barreled gun we’re talking about has a “real” Anson boxlock mechanism and not the traditional Garda box lock with coil springs.

Fabio Rizzini introduces us to the features and manufacturing philosophy on which the  Dea British Club .410 line, built by Fausti Stefano Arms,  is based upon 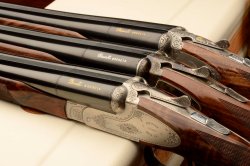 Bruno Circi
The small size of the .410 gaugeʼs receiver enhances its elegant shape

Only the gauge is reduced on these guns, but the space in which to obtain the four longitudinal pylons of the employed system are also reduced.

And, with the 19 gram lead loads, all the mechanical stresses are proportionally reduced to less than dimensioning, which transfers from a 18.3 mm diameter on the 12 gauge to 10.4 mm, but with much higher pressures, on the gauge in question. 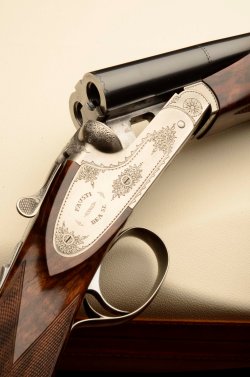 Bruno Circi
The Grade 1 version istands out in its sobriety 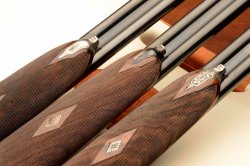 We can be aware immediately of the pressures when examining the breech of barrels: if we did not know what weapons we were talking about, and if we were to rely solely on still images, you would think that we would be talking about an express and not to a lean and nimble smoothbore double-barreled gun. There are three versions of this gun with identical mechanics but different finishes and performance.

Since they are mechanically identical and the woods used are always of high quality, well mineralized, solid and with properly arranged fibers, it is almost difficult to talk about “different” versions. They are simply three different productions that can be chosen according to an individual preference without ever having to consider the choice made to be inferior to the other two versions.

The writerʼs preference goes to the colour case hardened version, with less engraving and a thin clear rim surrounding the false lock plate. The latter is a choice that I do not share, because a traditional Anson solution does not have any need to be disguised and it is not inferior to a side plate lock solution, especially if we consider that the first manufacturer to adopt it was Westley Richards, not an unknown blacksmith who clumsily threw together shooting irons in a basement. If we also consider that the small receiver of a .410 naturally enhance the breast size, then this in itself provides a strong individuality. 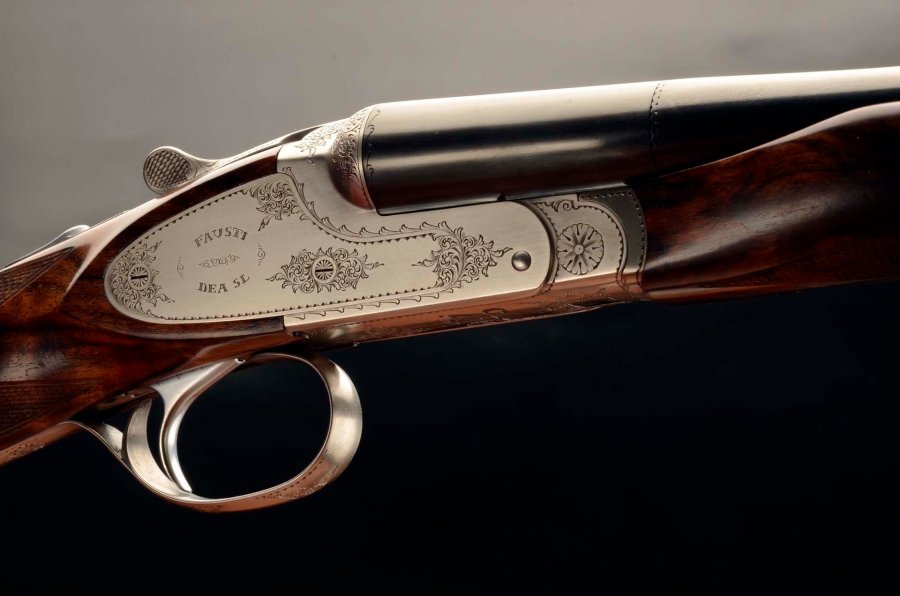 Bruno Circi
A side view of the Fausti Dea Club .410 detailing the side lock 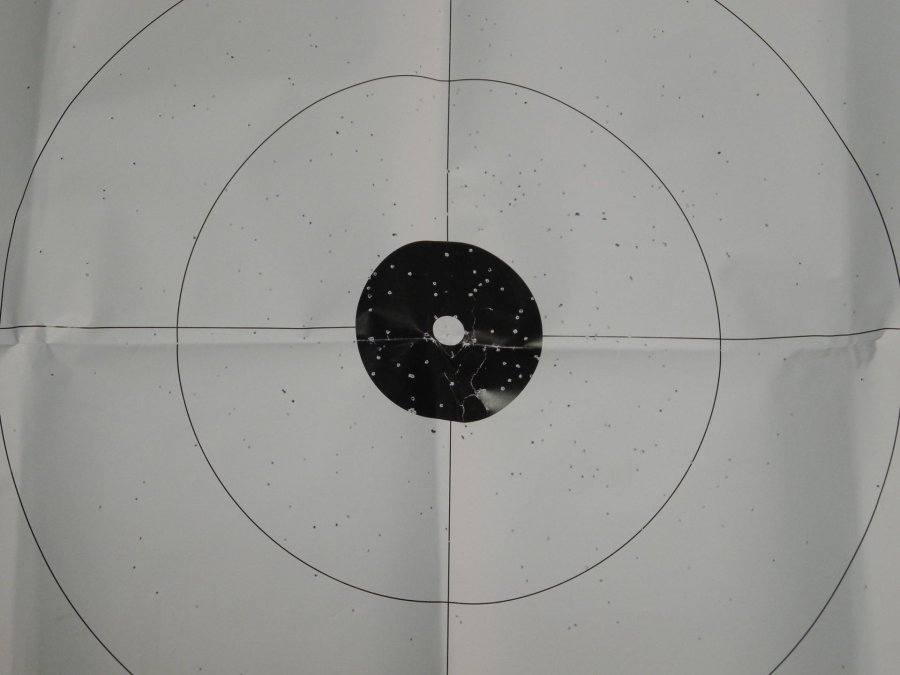 A shot pattern obtained at a distance of 20 m with a 19 g lead load of n. 10 pellets. The center is quite populated, it is simply a matter of being acurate in taking the shot 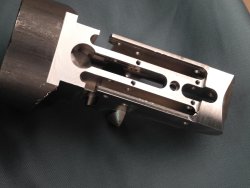 The receiver especially designed for the small gauge Magnum has no need for intervention from the aesthetic point of view. The trigger is a single trigger, which allows for an oval trigger guard proportioned to the receiver, and is of the sequential type. On the .410, it would certainly be possible to have a single selective inertial type trigger, which would work very well despite the low recoil, but in guns of this type, dedicated to specialized hunts, it is an unnecessary complication that should be avoided.

Side view of the Fausti Dea Club .410 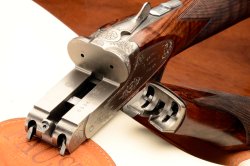 Bruno Circi
Receiver of the Fausti Dea Club .410. The finish is excellent 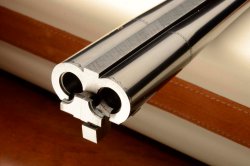 Bruno Circi
If we didnʼt know this to be a .410 smoothbore breech, we would be lead to think it to be the barrel assembly of an Express rifle

The interior of the beaver tail rods, a compulsory choice together with the English stocks, because of the small size of the barrels, has decorated screws and is very clean in appearance; the barrel hook shows correct signs of contact and dragging, which are also a good choice and are found in the cross head and hinge circle. The generously sized and extremely robust extractors use the quadrilateral section stem studied by Fausti. This stem does not require a secondary reference stem to prove that there is room for technology upgrades even on a classic rifle such as the double-barreled gun.  The three different versions of the gun give a wide possibility of choice and thus everyone can find the solution that they consider most convincing. 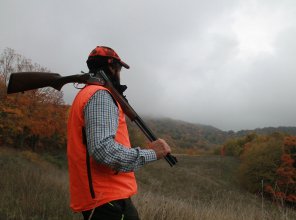 A day with the dogs gave us the opportunity to try the Fausti Class Express over-and-under double rifle in .30-06 Springfield. An alternative and elegant gun to experience wild boar hunting safely and with accuracy. The Fausti Class Express can also be fitted with smoothbore 20 gauge barrels for other types of hunting. 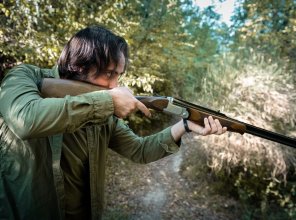 A safe and elegant firearm designed for driven hunts: the Fausti Class over-and-under in the Express version. We tested the double rifle at the shooting range on the running boar targets, a useful way to discover your gun's features and performance before enjoying the excitement in the woods. 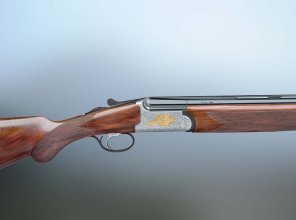 fausti-stefano-arms03/26/2021Virtual IWA 2021: new from Fausti Arms, an over-and-under for women hunters and one for sporting clays

The year 2021 begins with a renewal for the Italian brand Fausti Arms. Starting from a more essential logo, suitable for the new digital communication channels. The Fausti sisters – the owners of the company – focus on innovation without forgetting the success story of their company with a graphic restyling. The payoff "I'll be your gun" alludes to the level of customization that can be obtained … 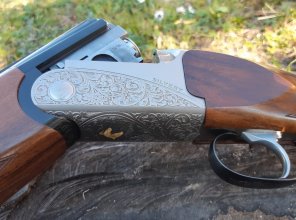 We tell you about a day in the field with the Fausti Silvery over-under. A shotgun suitable for walking hunts, essential in its elegance. It features a solid steel receiver with silver finish and deep laser engravings, while the locking system is the patented Fausti Four Locks system. We tested the 12 gauge version: read on to learn more about this nice, rugged and effective firearm, and watch our … 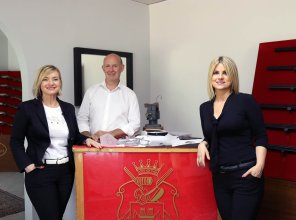 fausti-stefano-arms11/27/2020Fausti Stefano Arms from Italy: Let's have a look at the engravings and customization of unique Fausti shotguns

A Fausti shotgun does not come into a hunter's gun closet by chance. Usually, a custom-made firearm is created at the request of those hunters who would like to have a unique piece, both for its technical features and the detail aesthetics that make the difference for an enthusiast. 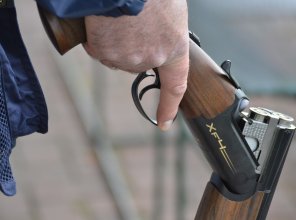 Let's discover in detail the Fausti Four Locks system with an explanation by those who patented this multiple-locking system for competition and hunting over/under shotguns – a guarantee of quality and sturdiness. Inside the Fausti show room and outlet there is also space for rifled guns ready for delivery.  Side-by-side and over/under express double rifles designed for ungulate hunters that besides safety and accuracy, add a touch of elegance to your hunting gun.