Let's start with some history for a better understanding: the Czechs and Slovaks are a stubborn people, which was already true in the times of the former Czechoslovakia and the Warsaw Pact. For while the other Eastern Bloc countries adopted the famous Kalashnikov assault rifle from big brother Russia, the Czechoslovak Socialist Republic developed instead an independent design in the shape of the Samopal vz. 58, introduced in 1958. The assault rifle conceived by Jiří Čermák for the short M43 (7.62x39) cartridge is reminiscent of an AK-47 in appearance, but differs significantly in technology. While the Russian classic is known to be a long stroke gas-operated rifle with a rotating bolt, the VZ 58 is a short stroke gas-operated firearm with a hinged locking piece. It was only ten years ago that the veteran VZ 58 was replaced by the new Czech CZ 805 Bren assault rifle. Due to its modular design, this modern short stroke gas-operated rifle with rotating bolt allows caliber changes from 5.56x45 mm NATO to 7.62x39 and vice versa by exchanging the barrel including the gas regulator, the bolt head as well as the magazine well and the magazine. Based on the CZ 805 Bren model, CZ subsequently created an assault rifle family with models such as the CZ 807, CZ Bren 2 and CZ Bren BR, all available in various configurations in terms of barrel lengths and features.

Typical features of the CZ 805 Bren A1 with a theoretical rate of fire of 760 rounds per minute and a 360 mm long (A1 standard version) or 277 mm long (A2 carbine) cold-hammered barrel are: 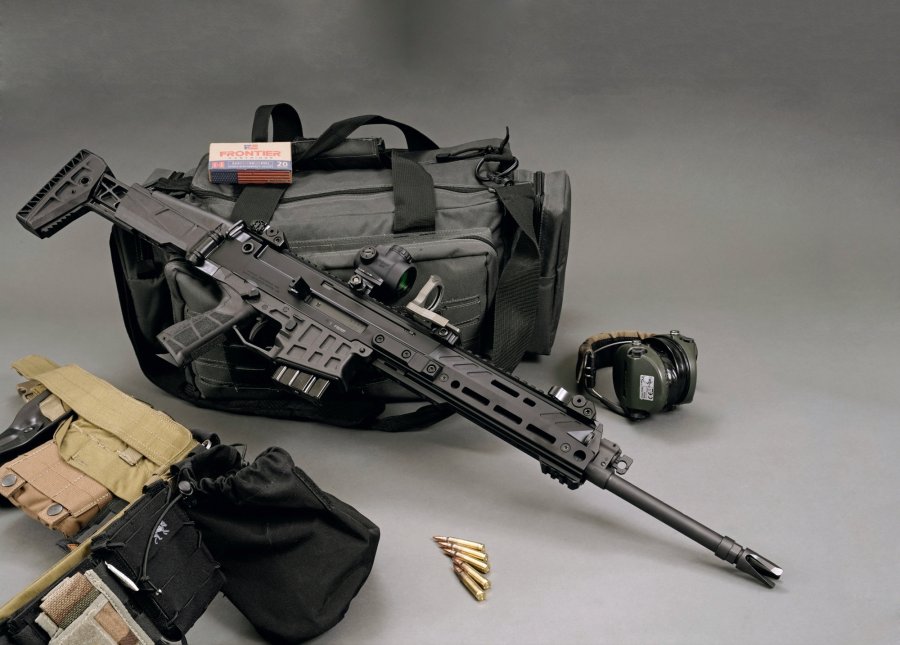 For the first time, we were able to test the brand new CZ Bren 2 Ms semi-auto rifle in .223 Remington. Here, the rifle is fitted with a Trijicon MRO red dot sight and a folding ALPHA-Tarac front sight.

The civilian and sporting CZ Bren 2 Ms – An ambidextrous rifle

For comparison, here is the CZ Bren 2 BR in the alternate 7.62x51mm NATO caliber.

The government-issue Bren 2 assault rifle with alloy upper receiver and synthetic stock is available in 5.56x45mm as well as 7.62x39mm caliber in a wide range of barrel lengths from 8" to 14". It uses (like the Bren 2 Ms civilian version with 16.5" barrel tested here for the first time) an indirect gas operation system employing a short-stroke piston and multi-lug rotating bolt, with a three-position gas regulator reminiscent of the HK G36. The stock design, on the other hand, evokes associations with the FN SCAR. The simple overall design, low weight due to extensive use of synthetic components, successful ergonomics with controls that can be operated from both sides, and very high functional reliability are all features of this family of weapons. The stock is foldable, and the side-mounted charging handle, which can be installed to the right or left side of the rifle, does not move during firing. This is a good thing, because depending on the unconventional shooting position and/or type of firing, there can also be no contact between man and machine of the unpleasant kind. We tried it out on our test gun: moving the charging handle from right to left or vice versa is possible within seconds. To do this, the charging handle only has to be pulled back to the rearmost position until it is in the large recess, and it can simply be pushed out to the side. It is then pushed back in on the other side – and that's it. 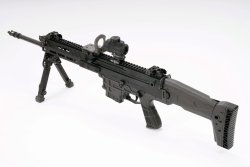 This well thought-out, user-friendly design is a common thread running through the entire construction of the civilian self-loading rifle. The synthetic lower receiver can be separated from the upper receiver by sliding out a captive pin. Looking into the magazine well of the lower receiver, one can see the adapter insert that provides AR compatibility. Interesting design details are also discovered in the trigger assembly. The hammer is driven by a spring whose pivot point is offset from the axis of the hammer. A similar design, but with two springs, is familiar from the popular, high-quality Hiperfire match triggers. With this trigger geometry, the CZ Bren 2 Ms trigger manages to have a trigger weight of under 2000 grams, which is very good for a mass-produced semi-auto out of the box. This is made possible by the spring putting more pressure on the hammer when it strikes. However, when it is at the bottom of the sear catch of the trigger, the spring pressure is reduced accordingly. This also reduces the trigger weight, because the pressure of the hammer spring does not act so strongly on the overlapping surfaces. It fits in with this that the safety can be activated in the uncocked condition and the rifle can be cocked with the safety on, which should be a standard feature of a modern rifle. 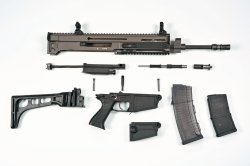 Behind the hinge joint of the folding stock is a button that must be pressed to pull the buttstock off the receiver. Now, to free the bolt assembly from the "upper", one must first slide the bolt all the way forward into the locked position.

This action separates the bolt from the charging handle carrier and only then the bolt can be removed from the receiver. The bolt carrier with firing pin safety on the left side can also be quickly disassembled into its individual components.

The special feature of the CZ Bren 2 Ms: an adjustable gas system

The CZ Bren 2 Ms features an adjustable system with three gas regulator positions. The first position is designed for normal operation, which was confirmed in our shooting practice with standard ammunition and one hundred percent functional reliability. The second position, with the gas supply reduced to about half, is for suppressed operation. The third position is reserved in case when, for reasons of discretion, reloading is also carried out manually, so as not to add to the noise level. After all, manually cycling the bolt can produce up to 119 decibels! Even the best suppressors cannot dampen the loud movement of a bolt, which is why the only option is to make a bolt-action out of his rifle. Here it makes sense again that the charging handle can be mounted on both sides, because only in this way is a user-friendly, fast reloading possible in all situations.

On the shooting range: everything's okay with the CZ Bren 2 Ms 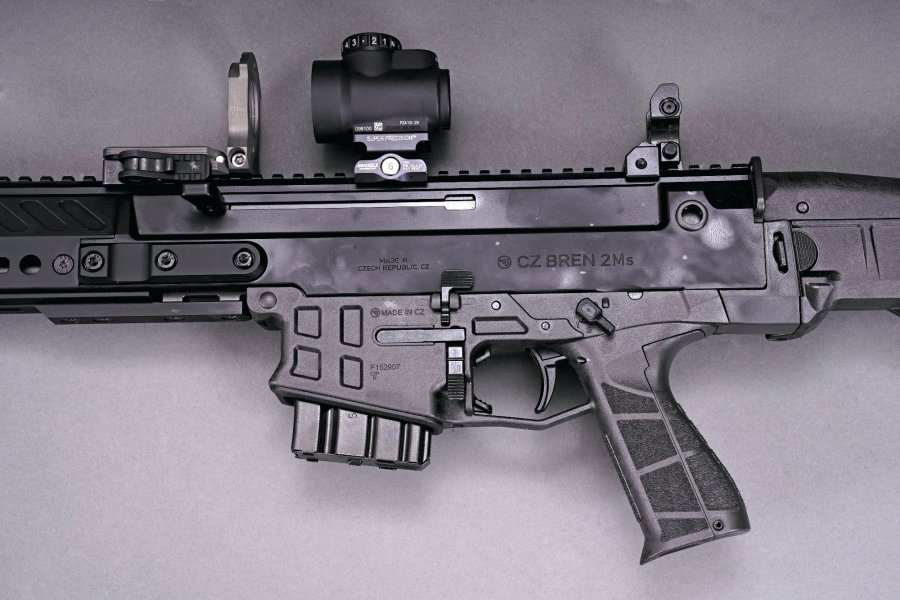 The CZ Bren 2 Ms is designed to be operated from both sides. Note the control buttons on the inside of the trigger guard front.

Our test rifle was fitted with an interesting optics combination consisting of a Trijicon MRO red-dot sight and folding Alpha TARAC front sight. However, accuracy testing with eight types of ammunition at 100 yards was done with a Delta Optical Stryker HD 4.5-30x56 FFP scope. The compact scope even fit with the iron folding sights (BUIS) remaining on the Czech semi-auto. We also attached an UTG bipod to the lower integral MIL-STD 1913 rail in the handguard. Of course, the handguard also features M-LOK interfaces at the bottom as well as on the sides for attaching further additional equipment. After just a few shots, the trigger thrilled us with a measured pull weight of just 1770 grams, while the characteristics were also of high quality. Such a refined trigger is rarely found in a standard rifle in this price range. In practice, we also liked the well thought-out concept of the controls and full ambidextrous operation. The trigger finger does not have to move much to operate the bolt catch lever. On the inside of the trigger guard front, there is a button at the top that can be used to catch and release the bolt. The lower button is for magazine release. A slight upward movement of the finger is therefore sufficient to catch the breech or allow it to slide forward again.

If you're looking for a self-loading rifle in standard .223 Remington caliber off the beaten AR-15 path, we can definitely recommend taking a closer look at a CZ Bren 2 Ms. Cleanly and ruggedly made, very light, reliable, easy to handle and sufficiently accurate for many shooting disciplines. Its price is also fair deal, in our opinion!

Here you can find the test of the pistol carbine CZ Scorpion EVO 3 S1 in 9 mm Luger.

More information about the CZ Bren 2 Ms can be found on the CZ website.

Subscribe to the Newsletter
This article is also available in this language:
DE
Click here for more information on the topics:
CZ (Česká Zbrojovka)Rifles
That might interest you too: 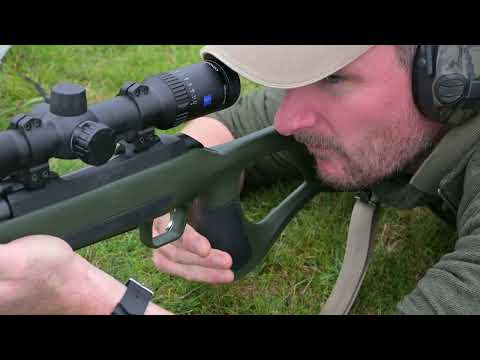 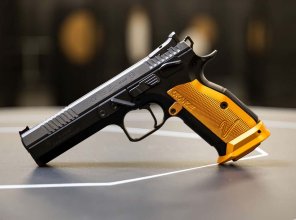 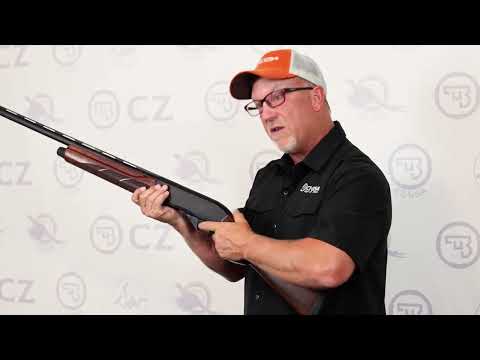 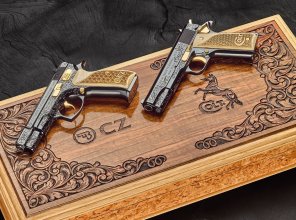