Since this year, the company Unique Alpine offers its Pro Action series actions in different versions also for gunsmiths as a basis for the building of individual custom rifles. This F-Class test sample is therefore also a unique piece, which is intended to demonstrate the performance of the Pro Action system.

The heart of the test rifle, the receiver and bolt, belongs to Unique Alpine's so-called Pro Action line. The material used is a prehardened tool steel with very good strength properties. The Pro Action is available in five versions, numbered from Type I to V in Roman numerals. However, the length of the different actions always remains identical. The Type V, which is designed as a single-shot action, is used for benchrest and F-Class firearms. In this action, Unique Alpine omits the magazine port, which makes the receiver more torsion-resistant. On the action top, a 155-mm Picatinny rail is made in one piece with the receiver. A pinned locking bushing, which is thus protected against rotation, finds its place in the front part of the action and accommodates the bolt locking lugs. The underside of the receiver is trapezoidal in shape so that the two countersunk action screws are forced to center in the bedding compound when they are tightened. A 7.95-mm wide transverse groove forms the seat for the recoil lug.

Marcus Heischer
Unique Alpine manufactures the Pro Action in five variants. In this case, the rifle is based on a pure single-shot action without magazine.

Like the receiver, the bolt is protected by a DLC (Diamond Like Carbon) coating. This coating offers very good protection against wear and abrasion while providing excellent sliding properties. The latter promote consistent friction when cycling. In addition, the anthracite gray coloring looks very classy in appearance. The bolt carries three lugs with a 60-degree bolt throw. Unique Alpine states that the chamber features a "true primary extraction". This means that when the bolt is opened, there is already a slight axial movement thanks to the leverage imparted on the bolt lugs via a cam. The wide throw, i.e. the rotation of the bolt handle by 60 degrees, combined with the very small axial rearward travel of the bolt of a few tenths of a millimeter, results in a high extraction force. Should a fired case jam in the chamber, the small axial travel when opening the chamber is enough to overcome the release torque of the case and eject it with little effort. Speaking of ejection, you will look in vain for an ejector on the bolt head. It is firmly installed in the receiver shroud, so that the case is not ejected immediately after leaving the chamber. This offers the advantage that each case can be removed by hand during sensitive cycling, which makes perfect sense with the carefully selected and usually weighed cases used in target shooting, in order to preserve the valuable brass. The receiver-mounted ejector could also be removed entirely by a gunsmith so that the case is no longer ejected.

The design of the extractor is also worth mentioning. It engages the extractor groove of the cartridge case on about a quarter of the case base circumference. This means that the extractor is very wide. In the UA actions with magazine wells, the wide extractor preferably has a controlled round feed, as is known from the 98 Mauser system. At the rear of the bolt, there is a three-position safety lever. Position number one allows the shot to be fired. In the middle position it blocks the firing pin and the third position additionally locks the bolt. Unfortunately, the operation of the safety was a bit sluggish on this rifle. The bolt handle can be fitted with either a ball or cone-shaped knob.

Marcus Heilscher
Eye-catcher: at 32”/814 millimeters, the barrel of the Unique Alpine F-Class is quite long.

Extra long: the barrel of the F-Class rifle

The Lothar Walther match barrel screwed into the receiver n this rifle impresses with its dimensions. Its length is a proud 814 millimeters, or 32 inches. The cylindrical contour is double-stepped: The diameter at the muzzle measures 26.5 mm. 435 mm behind the muzzle, the barrel thickens to a diameter of 28.5 mm. The matte gray finish reveals that this is a glass bead blasted stainless steel barrel. To achieve the smoothest possible barrel bore surface, the barrel's internal profile is hand lapped. In addition to the unusual barrel length for the .308 Winchester caliber, the twist rate is extremely short, at 8 inches or 203 mm long. Such a short twist rate in this caliber is known almost exclusively from short-barreled, integrally silenced rifles in conjunction with subsonic ammunition. Here, the designers chose this twist rate in order to be able to reliably stabilize even long HPBT bullets in the weight class up to 220 grains. The barrel free bore is designed so that the long 220 match bullets can also be sit in the casing accordingly. As a result, a maximum overall cartridge length of 72.9 mm is possible here with a 168-grain Match King bullet from Sierra. A competition muzzle with a very cleanly-made crown ensures consistent exit ballistics. We tested whether the long barrel really does add speed and energy. To do this, we compared the bullet velocities of the 13 test loads from a barrel length of 663 mm (26 inches) with the 814-mm barrel of the Unique Alpine. The result: the 150-mm longer barrel showed a small increase in muzzle velocity of up to four percent in ten loads. Three loads even leave the 814-mm barrel minimally slower. However, if you combine a very heavy bullet such as a 220-grain Hollow Point Boat Tail  with a very progressive powder in a loading, the performance gain will be more significant compared to the shorter barrel: the more progressively a powder burns, the longer the barrel should be to achieve a complete burn of the propellant.

The UA F-Class comes with a GRS stock 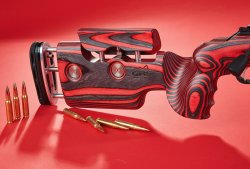 Marcus Heilscher
The two metal knobs on the gray-red laminate stock are used to regulate both the stock length and the cheek piece height.

For the stock, UA guys make use of a laminated wood stock from the renowned Norwegian manufacturer GRS. The model called "Kelbly X-Eater Stock" provides length adjustment in click-stop increments of three mm each, for a total of up to1.18”/ 30 mm. The adjustment is made with a large, spring-loaded pushbutton. A second, identical push-button releases the height adjustment for the cheek piece. Here, the shooter can adjust the height of the cheek piece by a maximum of 0.82”/21 mm in 1.5-mm increments at the push of a button. Although the adjustments are not perfectly free of play, they do offer sufficient stability. A pleasantly soft rubber recoil pad forms the end of the stock. The underside of the stock is 3”/76 mm wide at the front so that the rifle can be placed in the fore-end rest without any misunderstandings. The rifle then rests as if cemented into a corresponding benchrest. The action as well as the solid, 7.90 millimeter recoil lug are embedded in the stock with bedding compound. Unfortunately, the quality of the bedding left something to be desired, since no full-surface support can be produced between the action and the bedding due to voids in the bedding itself. However, this is not a production gun, but a demonstration specimen.

Bix'n Andy trigger of the UA rifle in detail

As a trigger group, Unique Alpine installs a ball trigger from the Austrian manufacturer Bix'n Andy. The excellent quality of ball triggers does not need to be discussed in detail. The weight of the single-stage trigger can be adjusted by using different, color-coded springs. The choice of trigger pull weight on the test gun was somewhat unfortunate. Using the Lyman trigger pull gauge, trigger pulls were measured at an average of 0.51 Newtons, or 1.83 oz/52 g. With clammy fingers on an open 300-m stand, such a trigger pull weight is too low. However, except for the weight being too lightly adjusted, the trigger worked very well.

Chris Hocke
Whether at 100 or 600 meters, the test gun harmonized exceptionally well with the Scenar competition ammunition from the Finnish manufacturer Lapua.

The unique piece was supplied by Unique Alpine complete, already fitted with a Kahles K 1050i scope with ten to fifty times magnification. EAW's brand new block mount, which is manufactured using a 3D printing process, served as the link between the optic and the gun. The first test shooting took place at a distance of 600 meters in the open air. Groupings were acquired using the Solo target system from German manufacturer Silver Mountain Targets. Here, four piezo dual sensors are mounted on a square frame. The four sensors detect the so-called Mach wave of the bullets flying at supersonic speed. 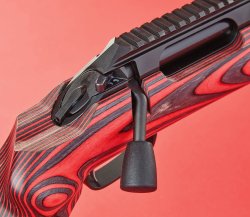 Marcus Heilscher
The three-position safety is located on the bolt shroud, directly behind the bolt handle. The user can choose between a ball- or a cone-sized knob.

By measuring the travel times to the individual sensors, a highly accurate measurement of the bullet position within the measurement frame is possible. The manufacturer states an accuracy of half a caliber diameter. Lapua's 175-grain OTM Scenar-L GB550 was able to produce an excellent group of 2.91”/74 millimeters, or 0.43 MOA. This load performed even better at 100 meters: 0.35”/9 mm, or 0.31 MOA, demonstrates the potential of this rifle. Although the groups achieved at 600 meters reflect the rifle's accuracy under realistic competition conditions, the unstable wind on the day of shooting altered them, so that a direct comparison of the 13 loads with each other is only of limited use. For this reason, the testers shot the F-Class rifle on a 100-meter stand that was well protected from wind and weather. It turned out that the long barrel did not get along equally well with all match loads in the test field. Although eight of the thirteen loads shot well under one minute of angle, a few loads allowed themselves more space on the target. However, the aforementioned Lapua cartridge impressively demonstrated that the barrel and action have a high precision potential. This potential can certainly be reproduced or even topped with hand-loadings that are appropriately matched to the cartridge chamber and the free bore.

Wrap-up: our impression of the Unique Alpine F-Class

Bottom Line: even though the test gun is a one-of-a-kind, Unique Alpine has succeeded in showing the potential of their Pro Action system with this one.

Subscribe to the Newsletter
This article is also available in this language:
DE
Click here for more information on the topics:
Unique Alpine Rifles.308 Winchester
That might interest you too: 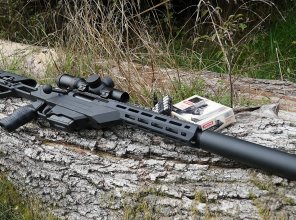 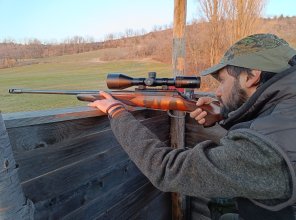 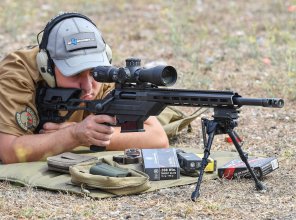 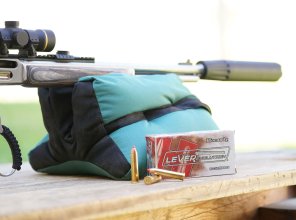 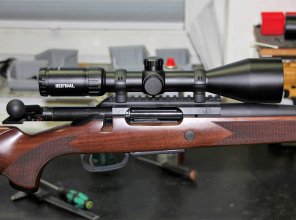 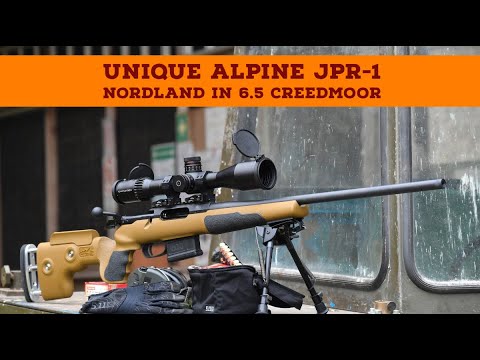 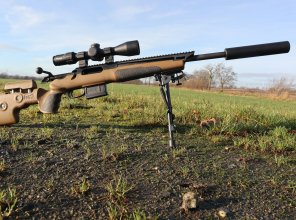