The British Malcolm Cooper, two-time Olympic champion in the 50 metre rifle three positions (Los Angeles 1984, Seoul 1988), together with his early comrades-in-arms Dave Walls and Dave Gaig, changed the world of sniper and precision rifles forever. Today, Accuracy International, founded in 1978, continues to be faithful to its legacy and is currently introducing the new AX MKIII and AX 50 ELR rifles.

Most recently, Accuracy International, a renowned British specialist, had been awarded a contract to upgrade the German Army's G22 sniper rifles to .300 Winchester Magnum. The upgraded G22A2 sniper rifle was presented by Accuracy International in 2018. It's an AX-style all-weather rifle for day and night use, with user configurability and mission adaptability. The rifle features a full-length rail and a right side folding stock, that folds over the bolt handle. The German Armed Forces commissioned the conversion of 780 weapons, to be delivered by 2020.

The latest sniper rifles, in the form of the AX MKIII and AX50 ELR, were first presented to the public by Accuracy International at the British Shooting Show in Birmingham, UK, and were due to come to Nuremberg, Germany, for Enforce Tac. The modular, versatile AX MKIII multi-caliber sniper rifle comes as standard in .338 Lapua Magnum with optional caliber conversion kits and continues the success story of these battle-tested British "Sniper Rifles", being a further development based on the AXMC and AXSR models. The new sniper rifle has also been tested according to NATO requirements and can be adapted to different missions. The AX MKIII has improved features in the area of the receiver, an ambidextrous 3-position safety catch and a free-standing, interchangeable AR-style pistol grip. It also features an integral ARCA rail under the light metal forend for the mounting on a tripod. Speaking of tripods: the outrageously expensive, super-light carbon models from the US manufacturer Really Right Stuff (RRS) are very popular. The MKIII is supplied with the proven, reliable double-stack AI box magazines with a capacity for 10 rounds.

Would you like a little bit more? The powerful AX50 ELR (Extreme Long Range) in the basic caliber .50 Browning Machine Gun (12.7x99 mm) is also a multi-caliber sniper rifle that can be converted to .408 CheyTac and .375 CheyTac. Like the AX MKIII, the AX50 ELR offers detail improvements and is also equipped with an ARCA rail for tripod mounting. Even in these extremely powerful calibers, magazine capacity is 10 rounds.

Subscribe to the Newsletter
This article is also available in this language:
DEIT
Click here for more information on the topics:
Accuracy InternationalRiflesLong range shooting.338 Lapua Magnum
That might interest you too: 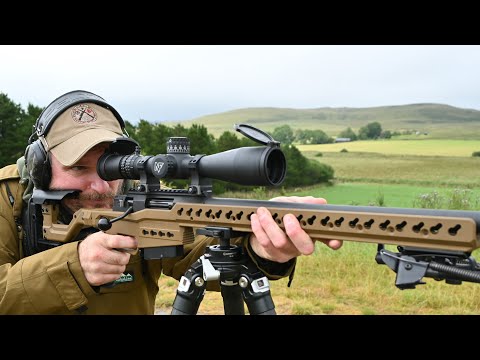 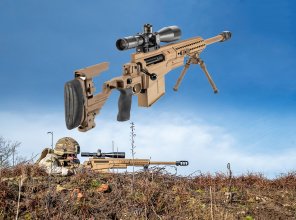