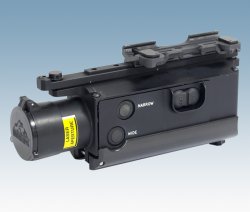 THALES Group U.K.
Size... matters: the G.L.O.W. is bigger than most direct competitors, yet represents one of the most powerful accessory laser dazzlers available

The multinational THALES Group is a world leader in the field of Electro-Optical CounterMeasures (EOCM), with the design and manufacture of systems to provide a non-lethal response to the increasing range of conventional and asymmetric threats.

The Optronics Division of the THALES Group, headquartered in Glasgow (Scotland, United Kingdom), has designed a range of laser based non-lethal electro-optical countermeasure systems which can be used to defend against a wide variety of threats whether they be on land, at sea or in the air. Said non-lethal systems can be used to provide protection against potential aggressors at vital points such as civil or military installations, vehicle checkpoints and convoys. They are designed to enhance the safety and capability of forces in peacekeeping operations and especially in areas where civilians and insurgents are difficult to differentiate. 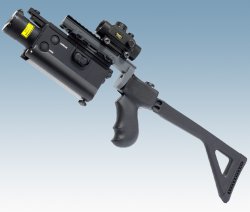 THALES Group U.K.
The G.L.O.W. dazzler can be fitted with a proprietary mount offering a side-folding stock, a pistol grip and an interface for instinctive optical sights for Stand-Alone use

Laser dazzlers represent the latest frontier in the field of non-lethal electro-optical countermeasures, albeit this kind of system has been around at least since the mid-1990s, when the Chinese NORINCO group launched the ZM-87 portable laser disturber, a very high-intensity laser-dazzling cannon that was reportedly manufactured in roughly twenty samples before production was stopped due to the fact that, being able to permanently injure human eyes at ranges up to two miles, or three miles when used in conjunction with a magnifying optic, the ZM-87 fell under the provisions of the 1995 United Nations protocol on Laser Blinding Weapons (a.k.a. the “Protocol IV of the 1980 United Nations Convention on Certain Conventional Weapons”), which was issued on 13 October 1995 banning all military use of laser devices that are specifically designed, as their sole combat function or as one of their combat functions, to cause permanent blindness to unenhanced vision (irreversible and uncorrectable loss of vision which is seriously disabling with no prospect of recovery to the naked eye or to the eye with corrective eyesight devices up to less than 20/200 Snellen measured using both eyes). Despite the ban, the NORINCO ZM-97 portable laser disturber, or some equivalent device, was used in at least three incidents, including the in-fampous Strait of Juan de Fuca laser incident, by Chinese, Russian and North-Korean forces against U.S. and Canadian helicopters on patrol over the borders of the Chinese, Russian, North-Korean, Japanese, Taiwanese and Filipino territorial waters. 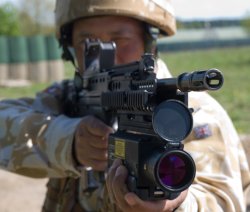 THALES Group U.K.
The “Green Light Optical Warner” has been developed by the THALES Group in co-operation with the UK MoD DSTO, and has already been adopted in small quantities by the British Army

Given that those laser devices which are unable to cause permanent eye damage are not covered by the U.N. ban, many Armies and Police forces soon realized the advantage of having said devices in their arsenals to face the multiple and multifaced threats of modern asymmetric warfare. Once again, the People's Republic of China was one of the first nations to issue its Armed Forces and Police with non-lesive portable laser disturbers, which were used extensively to quell disorders in Tibet and in other unrestful areas of the Country. The United States Armed Forces also started to explore the laser dazzlers as a scalar force option after facing the difficulty of handling asymmetric threats in the Afghan and Iraqi theaters of operation. The U.S. forced experimented with laser dazzlers capable of inflicting a sense of dizziness and nausea against targets other than just temporary sight problem, before finally launching the GLIS (“Green Light Interdiction System”) trial that led to the adoption of the GLARE-MOUT system manufactured by B.E. Meyers, which can be used as an accessory to a service rifle and issued to any serviceman.

The British forces also rapidly realized the usefulness of laser dazzlers and similar systems; hence why a program was launched a few years ago within the DSTO (Defence Science and Technology Organization) to develop a device that could be used as a Stand-Alone or as an accessory and issued to British troops deployed in critical areas. The program succeeded with the development of the “Green Light Optical Warner”, now manufactured by the THALES Group and ready for sales and delivery worldwide. 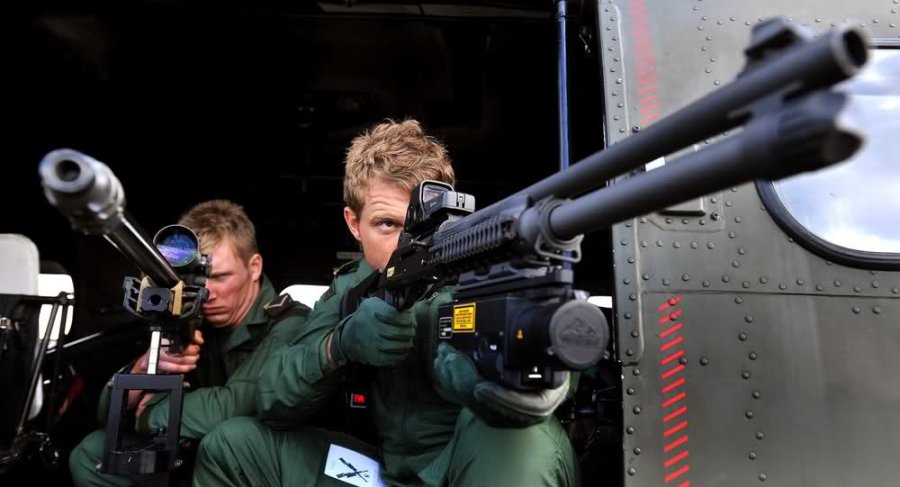 Press Associated
A Royal Air Force team composed of a sniper and a spotter providing cover for the London 2012 Olympic Games; the spotter is armed with a Benelli M1014-JSCS equipped with a THALES “Green Light Optical Warner”

The G.L.O.W. is a gun-mounted laser dazzler/warner which uses an intense green light to warn personnel approaching peacekeeping forces that they are under suspicion and should not approach further.; when employed directly against the eye and face area, the G.L.O.W. beam will instantly affect the target with a temporary yet intense disruption of sight, effectively disturbing its aggressive potential and allowing friendly forces to approach and attempt to subdue it more safely. The G.L.O.W. emitter can be gun mounted using a Picatinney Rail, operated remotely or used handheld with a mount equipped with a pistol grip, a sidefolding stock and an optics mount. As a military force escalation, the G.L.O.W. device will aid the determination of intent and degrading the ability of the aggressor to take offensive action. Particularly in its stand-alone configuration, the THALES “Green Light Optical Warner” can also be used by Police and Private Security Companies to guard fixed assets and perimeters and to warn or fend off aggressors during civil unrest.

THALES Group U.K.
The G.L.O.W. can be mounted on any service weapon equipped with a MIL-STD-1913 “Picatinny” interface, to provide a non-lethal option for Military Operations on Urban Terrain

The G.L.O.W. is powered through standard AA batteries and features an extremely intuitive mode of operation, with a single On/Off switch and two push-buttons to allow the user to select between a choice of narrow or wide beams, the first one being for use at close quarters in the urban scenario, with a maximum effective range of 50 metres, and the second one being more apt for longer-range use, up to 350 metres. In both modes the beam can be pulsed to give a higher level of warning. GLOW features a wide environmental range of operation and a consistently high quality of beam to ensure target coverage.

THALES Group U.K.
The “Green Light Optical Warner” can deliver a narrow beam up to 350 metres or a wide beam up to 50 metres, either in fixed or pulsating output mode

Albeit bigger and heavier than most direct competitors on the market, the G.L.O.W. system is also more powerful, allowing the operators to engage targets at longer ranges than most of its competitors. Furthermore, the G.L.O.W. offers a unique and robust level of safety, featuring a dual independent, continous built-in safety measure test which continually monitor the level of output to ensure that it falls within the specified values and provides constant system status awareness to the operator. This helped THALES to gain full legal, medical and ethical clearance of the G.L.O.W. system within UK forces before allowing it into service.

The effect of the system is of course non-damaging, allowing use during peacetime and pre- and post-conflict situations. The authority to deploy can be given to troops on the ground, enabling an instantaneous response when the situation demands. 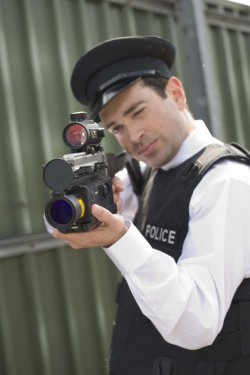 GLOW is in service with several Countries including the UK. The principle of laser warning and dazzling and the G.L.O.W. system itself has been tested and proven over a period of several years, where G.L.O.W. system prototypes have been shown to save lives in the ambiguous asymmetric situations often encountered in modern conflict. The use of the G.L.O.W. and similar systems is seen as a positive demonstration of commitment to the safety of the community in which it is being used.

It is no wonder if the UK forces dispatched and committed to provide safety and security to the London 2012 Olympic Games have been extensively provided with G.L.O.W. emitters, in both their Stand-Alone and accessory/undercarried configuration. The London Olympics are the first of the post-9/11 era to take place in a high-risk location, that has already been targeted by massive and devastating terror attacks − the 7/7/2005 London underground bombings and the 7/21/2005 attempted London underground bombing, which overall left 52 innocents and 4 suicide bombers dead and approximately 700 injuried. The 2012 Olympics also coincides with the Islamic sacred month of Ramadan, and marks 40 years from the tragic Munich 1972 Olympics, when a Black September 5-men commando attacked, kidnapped and killed eleven members of the Israeli delegation along with one German officer before being gunned down by Police. The use of high technology systems, such as the G.L.O.W., to provide additional levels of security might not be enough alone, but will sure help to make athletes and attendees feel safer.