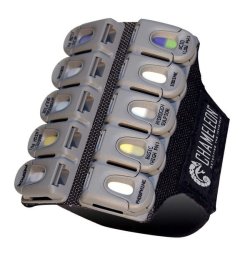 Having to deal with hazardous, possibly lethal chemical vapors is no longer something only happens to firefighters or HAZMAT operators: the everyday service life of military personnel, Police and other law enforcement officers, EMS first responders, medical personnel and Civil Defense rescuers might find themselves endangered in their line of duty by unwittingly exposing themselves to toxic fumes. It may happen during a drug bust in an improvised lab set up to produce methamphetamines or other synthetic drugs, or during the rescue of students trapped in their school chemistry lab when somebody mixed the wrong substances, or when dealing with desperate persons attempting "Chemical Suicide" by inhaling the vapors of common household cleaning products. In these cases, being able to quickly check the air quality in the field and understanding whether or not they've been exposed to hazardous chemicals might make the difference for these operators, between saving lives or becoming victims themselves.

This doesn't means that said operators should carry a heavy, cumbersome electronic chemical detector wherever they go. Morphix Technologies, a Virginia Beach (Virginia, USA) -based company, now offers a lightweight, practical solution that is easy to carry and use while "on the go" in the everyday service life, and is based upon a tried-and-true technology that will make its results 100% trustable and accurate. The new system is dubbed the CHAMELEON, and is already available for purchase by qualified individuals, agencies and private companies and persons alike. Mixing original ingenuity with a somewhat traditional chemical detection technique, the CHAMELEON has already proved itself to be more than perfectly apt for the use it has been intended for. 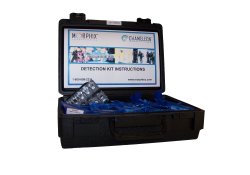 The first one, the CHAMELEON armband, is composed by a plastic holder with ten slots for detection cassettes, attached to a stretchable armband through a velcro strip. The stretchable armband itself has both velcro strips and loops, so that the user might wear it in multiple position over the forearm, bicep, thigh, or even ankle, according to whatever he/she's more comfortable with and to the kind of personal equipment he/she's carrying in that particular situation. The cassette holder can also be removed from the stretchable armband and fixed to any support that features velcro strips: it may thus be worn over a protective vest, over a binder, or even secured on a desk, an instruments board, a dashboard, basically any surface. Such versatility allows the CHAMELEON to be used in a variety of roles, even outside the Law Enforcement and the Emergency sectors. Security inspectors in industrial plants may want to have one of these handy; similarly, military personnel both on the front line and in rear echelon roles might need this quick detector to be sure that the enemy hasn't used an improvised chemical weapon against them, or that a dangerous spill hasn't taken place in their sector. 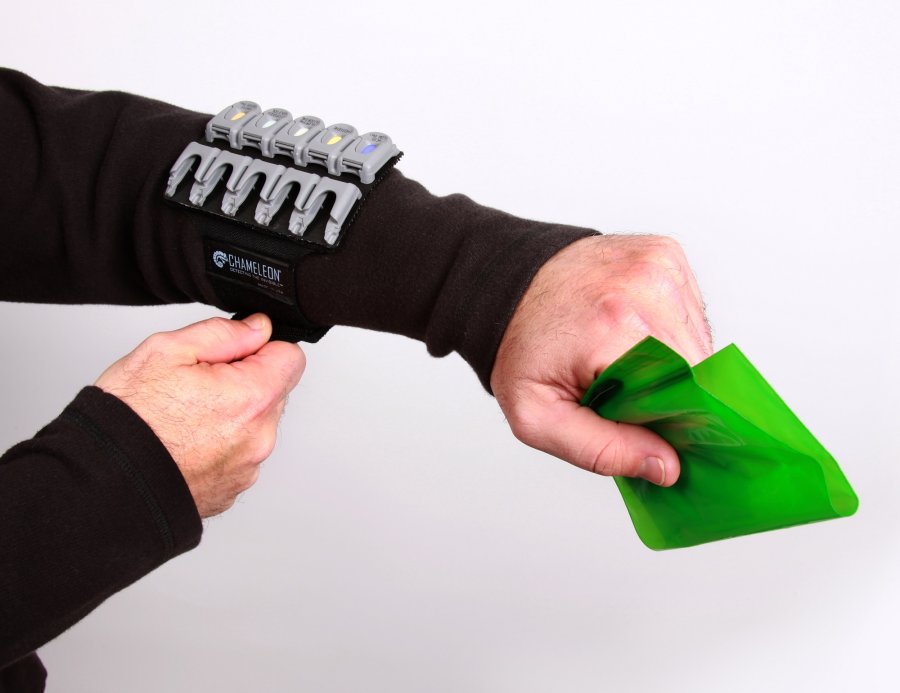 The second, but most important, element of the system is the chemical detection cassettes. Morphix Technologies offers a wide array of them, and each CHAMELEON armband can hold up to ten of them at the time; the CHAMELEON detection cassettes are sold sealed one by one in airtight bags, each labeled with the specific chemicals they're made to detect, as well as with the shelf life expiry date. Once opened, each cassette has a 24-hours operational life. Chemical detection cassettes are grey plastic supports for simple, colored reagent ribbons; each of them is labeled with the chemical they're made to detect, and each comes in a different color. The technology is tried and true, as it's more or less the same of litmus paper, that has been used in industry, chemistry, forensics and medecine for decades now.

The system works just as simply as it gets: when the CHAMELEON is exposed to chemical vapors, the cassette corresponding to the element or compound that's contaminating the air will change color; the stripe will change only half-way, so that the user will be immediately be able to see if a cassette still feature a single color (not exposed) or two (exposed). Sensitivity of the CHAMELEON chemical cassettes is such that they will react to half of the chemical's own IDLH ("Immediately Dangerous to Life or Health") dose in less than five minutes, and to a PEL ("Permissible Exposure Limit") dose in less than thirty minutes. The CHAMELEON system offers a wide array of cassettes for different commonly encountered chemicals: hydrogen chloride, ammonia, chlorine and fluorine, diborane, hydrazine, hydrogen sulfide, iodine, phosgene, phosphine, sulphur dioxide, nitrogen dyoxhide and phosgene.

Last but not least, unlike other colourometric devices, the CHAMELEON is a multi-environment system that can be used in any condition, as far as it concerns both environment and temperature, and will not lose effectiveness when wet. Being mission-configurable on the field and low-cost, it's worthy of a note as a piece of equipment that police and military personnel, firefighters and first responders shall take into consideration, either for department/corps adoption or for private purchase. All inquiries shall be placed directly with Morphix Technologies.