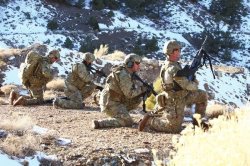 GD-OTS - General Dynamics Ordnance and Tactical Systems
The LWMMG was developed following an intense study over the demands for more powerful, portable support weapons by troops operating in the Middle Eastern theatres of operations

Although mostly known for the construction of heavy armaments − armered vehicles, military aircrafts, missile systems − the US-based General Dynamics group is also engaged in the research and development of individual and crew-served weapons, through its "Ordnance and Tactical Systems" division (GD-OTS) − previously known as the General Dynamics Armament and Technical Products division (GDATP) − which is the main global source for crew-served support weapon systems such as the Mk-19 and Mk-47 "Stryker.40" belt-fed automatic grenade launchers and the GAU-19/A and GAU-19/B heavy machineguns.

One of the GD-OTS' latest creations is the "Lightweight Medium Machinegun", or LWMMG, conceived as an extended-range infantry support weapon.

First showcased in 2012, the LWMMG hadn't been "spotted in the wild" for a while now; by showcasing it again at the 2014 edition of the EUROSATORY defense expo in Paris, last June, GD-OTS confirmed that the project is indeed still on.

The concept behind the LWMMG spawned from the observation of the habits of several military units deployed in mid-eastern theatres of operation − which often openly shown their favour to 7.62x51mm NATO light and general-purpose machineguns (e.g. the FN M-240 or Mk-48/Mod.0) over the normally-issued 5.56x45mm models, such as the FN "Minimi" a.k.a. M-249 SAW, due to range and terminal power concerns. 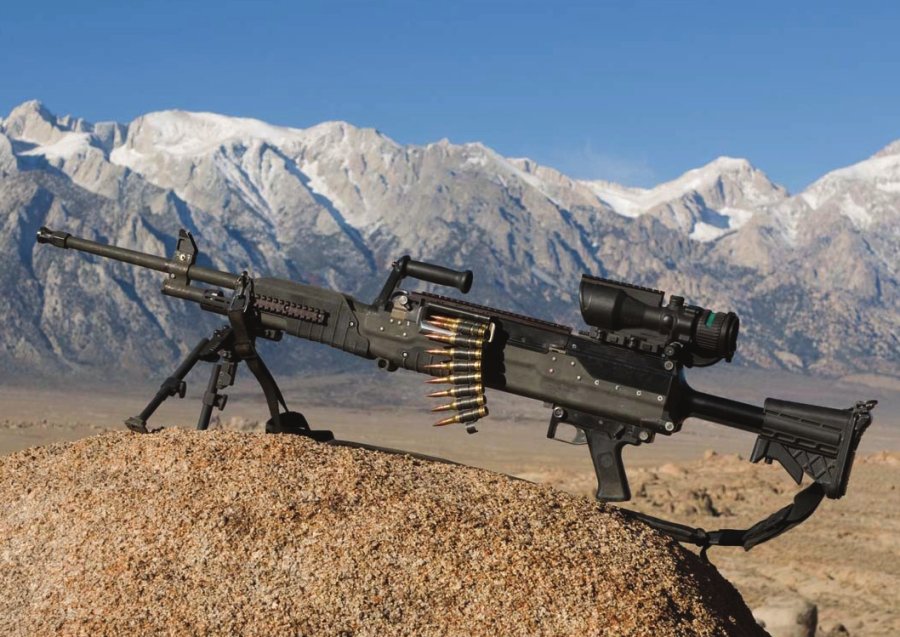 However, even the 7.62x51mm caliber has often been reported to be lackluster in terms of performance against hostiles barricaded in solid buildings, and − when fired from general-purpose machineguns − it also demonstrated poor range and accuracy in desert and mountain warfare. In these vast, open spaces, a small group of insurgents equipped with a heavy machinegun (generally an old DShK) and a handful of even older high-caliber bolt-action rifles can keep an entire NATO patrol pinned for hours, or until air support is available.

The only viable solution in these cases would be to break contact and disengage under the cover of a heavy machinegun (firing 12.7x99mm NATO/.50-BMG ammunition, or even up), an autocannon or an automatic grenade launcher, but such a solution could apply only to those platoons that advance under the cover of armed vehicles. 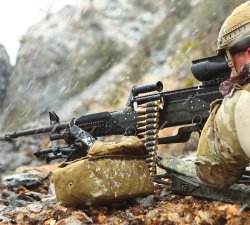 GD-OTS - General Dynamics Ordnance and Tactical Systems
The LWMMG's chambering for the .338 Norma Magnum -- in production since the year 2009 -- offers the required range extension for the vast battlefields of rural Afghanistan

For long-range foot patrols, GD-OTS solved the problem through the creation of a machinegun that bridges the gap between general-purposes machineguns and heavy machineguns.

Featuring an overall weight of 24 pounds (10,88Kg.) and sporting a 24"/60,96cm.-long barrel equipped with an upfolding bipod, the LWMMG is man-portable and can be operated by a single gunner.

The size and weight of the LWMMG are more akin to the specs of a post-WW2 machinegun, but the good balance allows individual use of the platform in standard infantry roles; there's no need for aides to the gunner, as the rest of the platoon members can share the weight of the spare ammo belts.

The LWMMG is based upon a proprietary Short Recoil Impulse Averaging system, which − along with a fairly low cyclic rate, standing at 500 rounds-per-minute − keeps it controllable during full-automatic fire.
In the Short Recoil Impulse Averaging system, the entire barrel, barrel extension, gas system with long-stroke piston and bolt assembly recoil inside the outer housing of the gun, effectively reducing felt recoil to 7.62x51mm levels.

GD-OTS - General Dynamics Ordnance and Tactical Systems
General Dynamics is still refining the LWMMG project, in hopes to turn it into the ultimate support weapon for a plethora of mounted and man-based roles

That's an impressive level of recoil reduction, particularly since the LWMMG is chambered for a very high caliber, the relatively new .338 Norma Magnum.

The caliber itself − which this weapon feeds through self-disintegrating belts − is what makes the LWMMG lightweight medium machinegun so effective: fired from the 24-inches barrel at a muzzle velocity of around 807.72 meters-per-second (2.650 feet-per-second), the .338 Norma Magnum can reach as far as well over 5.5 kilometres (6170 Yards) and be effective at 1700 metres (1860 Yards).

At 1000 metres, the .338 Norma Magnum can still deliver over delivering over 1900 foot/pounds (2576 Newton/meter) of energy on its intended target.

This translates in immediate incapacitation of lightly armored vehicles and defeat of Class III ballistic protections, even when reinforced with armor plates. It also equals to well over four times the terminal effect of any 7.62x51mm NATO load.
Built out of high-technology metal alloys and polymer, the General Dynamics LWMMG also comes with a fully collapsible stock, a three-positions selector switch for safety, single shots and full-automatic fire and several MIL-STD-1913 "Picatinny" rails.

As of today, the LWMMG is still being refined by GD-OTS, in close collaboration with the United States military − the main intended user for this system.