The DIEMACO company − headquartered in the town of Kitchener (Ontario, Canada) and a premier developer and manufacturer of small arms and light weapons for the Canadian Forces − was acquired by the military division of the Colt's Manufacturing Company in 2005, and has been doing business under the name of Colt Canada ever since.

Not only did Colt Canada continue to develop and sell AR-15/M16/M4-based weapon systems for the Canadian Forces and for several export customers (namely the Netherlands, the United Kingdom, Norway, and Denmark); the company has also been charged to provide Colt system-based military small arms to those trustworthy overseas military allies which are better off purchasing from Canada than from the United States out of sheer bureaucracy and other regulatory red tape − or lack thereof.

Bruno Circi
The Colt CK901 rifle is chambered for the 7.62x39mm caliber, and feeds through AK/AKM-type magazines -- including the though, modern US-PALM AK30 mag

At the 2014 edition of the EUROSATORY defense expo − held in Paris, at the nord-Villepinte exhibition and convention center, on June 16th thru 20th − Colt Canada showcased to the international public a new variant of Colt Military's own modular weapon system, dubbed the CK901.

More specifically the CK901 assault rifle is a spin-off from the CM901 system, first launched in 2010 as a modular overhauling of the M4 assault carbine.

The Colt CM901 is a direct gas impingment rifle sporting a monolythic upper receiver and a modular lower, which allows caliber conversion from the native 5.56x45mm caliber to the heavier 7.62x51mm chambering, and the use of either STANAG 4179 or SR-25 type magazines depending from the caliber. A semi-automatic version of the CM901 also exists, but it's not commercially available outside of the United States.

However, while the CM901 has been specifically conceived for NATO standard rifle calibers, the CK901 is chambered for the 7.62x39mm M43 caliber, used in AK, AKM, SKS, Vz.58 and other former "ComBloc" rifles and carbines, and probably the most popular and widely available military rifle round in the world. 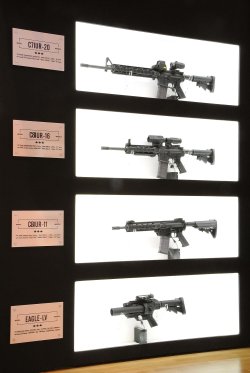 The Colt Military - Colt Canada CK901 "hybrid rifles" maintains the most important key features of the M4 baseline carbine and of the CM901 modular weapon system.

The only significant changes were made to adapt the system to the new (old) chambering while keeping it user-friendly, so that operators who are already fond with M16 rifles, M4 carbines and their derivatives will be able to master the new CK901 with little or no additional training.

In lieu of the CM901's modular magazine well, the CK901 sports a slant magwell with a paddle-type release lever which will take any kind of AK/AKM magazine.

The sample showcased at the EUROSATORY expo was fitted with an US PALM AK30 magazine − probably the world's best AK/AKM compatible magazine in the world today − but generally the CK901 will allow Police and military forces willing to replace their AK/AKM rifles with more modern and versatile systems while retaining the superior knockdown power of the 7.62x39mm caliber to do it without having to throw away a huge number of magazines as well.

The Colt CK901 is compatible with 14.5-inch and 16-inch interchangeable barrels, but like many other rifles and carbines feeding through AK/AKM-style magazines, it comes without a hold-open device.

It's not yet known whether or not the CK901 will also be convertible to the 5.45x39mm round − which is at least as popular as the 7.62x39mm, as it became the standard rifle cartridge for Warsaw Pact Countries in the mid-to-late 1970s − nor if a semi-automatic commercial variant will ever be developed.

However, Colt Canada representatives at the EUROSATORY expo told the authoritative Jane's IHS publication that international orders for the CK901 have already been placed: more specifically, the Yemeni Republican Guard aims to replace its existing AK-47/AKM rifles with the CK901 itself.