A “Ribbon Gun” for the US Army?

We can’t say for sure that it will be the next issue weapon of the US military, but it’s an imaginative option for sure: the US Army reportedly ordered some prototypes of the L5 rifle, a futuristic multi-bore, single barrel gun with electronic firing system that dispenses with traditional steel components using innovative caseless ammunition. Produced by Forward Defense Munitions, the L5 was actually introduced some months ago at the SHOT Show 2018, and the prototypes ordered by the military are a modified 4-bore version named L4.

Founded in Colorado Springs, USA, in 2016 by the inventor Martin Grier “with the goal of developing a superior firearm”, Forward Defense Munitions has been defined as a “garage based company”. But Grier’s creature – on paper, at least – promises to be just short of a “miracle weapon”, even if at present we can only rely on what the company’s website says: “The L5's Electromagnetic/Transverse Camshaft action is efficient, safe, and reliable. The battery-powered action can fire upwards of 15,000 shots per battery charge,” they explain. 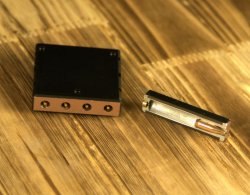 “FDM's charge block ammo comes pre-loaded straight from the factory, which obviates the need to load individual rounds, saving vast amounts of time by passing that duty on to the manufacturer. This profoundly increases the effective sustained rate of fire for forces wielding the L5.  To prevent overheating, each block is ejected after use, along with any heat that would otherwise be held in a chamber. The blocks are precisely guided into position, moving only 1/2-inch, minimizing the probability of jamming.”

All military (L4m) and civilian (L4c) charge blocks are center-fire and made of fiber-reinforced epoxy composite. L4m Blocks operate at peak (80k psi) pressures and are not intended to be reloaded, while L4c versions work at somewhat lower pressures and can be reloaded indefinitely. Charge blocks are loaded with conventional primers, propellants and projectiles. Each charge in the block has a corresponding firing pin in the action, and a firing pin striker actuated by a miniature electromagnetic coil. Charge blocks snap together like Legos into stacks, and are not stored or transported in magazines.

Bad experiences from the past

The manufacturer claims that “the L5 Rifle, coupled with charge block ammunition, represents an entirely new firearm class and addresses the prevalent and dangerous problems of reloading, overheating and jamming, which are inherent to the design of currently deployed firearms.” 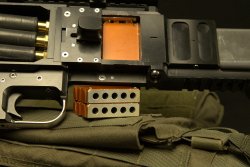 Each shot has in fact its own “chamber” inside the charger block, and this reduces heating and jamming issues. Every five (or four, in the military model) shots the block is ejected, along with its heat, and a new, cold one takes its place. The barrel is constructed with a thin, hard-alloy core, and a light-alloy outer casing that acts as a finned heat sink. In continuous operation, the barrel will reach an elevated temperature, then stabilize.

The rifle is capable of semi-auto and full-auto fire, and it can even volley-fire all five or four rounds simultaneously. Thanks to its Picatinny rails, it can also be easily accessorized “with standard, commercially-available gear.”

It all sounds great. Yet, this so-called “Ribbon Gun” has at least two serious criticalities, both of which can be fatal flaws: it fires caseless ammo and it features a fully electronic firing system. Relying on batteries only is a problem for a gun that should operate in any condition, any weather and for prolonged time with very little or no maintenance (especially when stocked). Moreover, electronics are fragile and hard to repair in the field.  As for as caseless ammo is concerned, the expensive failure of the G11 rifle in the 1980s still lingers in the minds of many. Furthermore, the multi-bore barrel and the charge block ammunition are still untried systems.

So, whatever the future is, it is not quite near. It will take a lot of time and tests to see if “Ribbon Guns” can replace conventional military rifles. The concept is intriguing, nonetheless.