21st MILIPOL: new products on display at the 2019 security trade fair in Paris

all4shooters.com reports about the highlights of the MILIPOL international security trade fair, which took place from 19 to 22 November, 2019, in Paris, the cosmopolitan French metropolis. Much of MILIPOL 2019 was dedicated to the US Army NSGW "Next Generation Squad Weapon" project, in which SIG Sauer, a German manufacturer, is also participating.

Harald Gräff
All the big players in the defense industry were represented in a manner befitting their status. Here, the RUAG Ammotec stand.

Once again, the beautiful, historic city on the Seine was the venue for the MILIPOL security trade fair, which this year attracted 1,005 exhibitors from 53 nations and 29,939 visitors from 151 countries. Further impressive statistical figures: 27 specialist conferences with 47 speakers and 1,058 listeners, 161 official delegations from 77 countries and 331 journalists from 27 countries.

The US Army NSGW project at MILIPOL 2019

At MILIPOL 2019, General Dynamics Ordnance and Tactical Systems (GD OTS) presented at the Beretta Defense Technologies (BDT) booth the 6.8 mm (.277") caliber RM277 assault rifle and light machine gun, still in the prototype stage, for the US Army's Next Generation Squad Weapon (NGSW) project. The goal is to gradually replace the M4A1 carbines and M249 light machine guns in 5.56x45 mm with more powerful weapon systems from 2023 onwards. General Dynamics Ordnance and Tactical Systems, AAI Corporation Textron Systems and SIG Sauer are involved in the tender. The medium caliber 6.8 mm with a "General Purpose Projectile" is ballistically between the 5.56x45 mm and 7.62x51 mm, but is said to have little in common with the already well-known Remington 6.8 SPC (Special Purpose Cartridge) from 2002, although the bullet weight should also be between 85 and 120 grains. 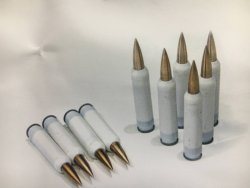 All three manufacturers will supply 43 light machine guns and 53 assault rifles for the tests, with True Velocity as ammunition supplier contributing 845,000 cartridges. GD OTS cooperates closely with Delta P Design, a sound suppressor manufacturer, and True Velocity, an ammunition manufacturer. The two weapon systems featuring a bullpup design, which are the same in design and operation, are based on an interesting operating principle of an air-cooled, combined gas and recoil-operated technology with impulse averaging. It's the "Short Recoil Impulse Averaging" system, patented 9 years ago, which GD OTS also used in the "Lightweight Medium Machine Gun" (LMMG) machine gun. Thanks to the short recoil impulse averaging operation, the RM277 in both versions should be stable as the proverbial rock also in fully automatic continuous fire and hardly wander off the target, which promises precise hit placement over longer ranges.

The fact that the RM277 family fires from a closed bolt when in semi-auto and from an open bolt when in full-auto awakens associations with legendary military weapons such as the German FG 42 paratrooper rifle in 7.92x51 from 1941 or the US-American Stoner 63 in 5.56x45 from 1963. According to reports, the RM277 weapons were already presented at the AUSA (Association of the United States Army) Symposium in Washington, DC, in mid-October 2019. However, the system is only completed by the special 6.8 mm ammunition with polymer case from True Velocity (see our article on True Velocity's composite-cased 6.8mm cartridge here). In addition to GD OTS, SIG Sauer is also offering its own SLMAG machine gun, the LMMG, in the .338 Norma Magnum long-range caliber, which can also be supplied with polymer case ammunition. Until now, it has always been said that ammunition with polymer cases remains stuck in a hot cartridge chamber and is therefore not functionally reliable. However, these problems seem to be a thing of the past. The great advantage of ammunition with polymer cases instead of brass cases lies in the almost halved weight and thus the significantly improved transport logistics in military units.

Of course, SIG Sauer also showed its contributions to the "Next Generation Squad Weapon" (NGSW) program. For the first time we were able to admire the MCX Spear assault rifle/self-loading rifle in caliber 6.8x51 mm with side charging lever, 16" barrel, adjustable gas block and folding stock. Due to the modular design, a caliber change to 7.62x51 mm can be achieved quickly. A special feature of the typical AR-style controls: the bolt stop lever is a small push button located directly above the trigger on the right-hand side of the handle. It goes without saying that a newly designed MIL-SLX68-QD silencer is part of the complete package. In addition, the East Coast giant also exhibited the Light Machine Gun (LMG) in the 6.8 caliber. This modular LMG also allows a caliber conversion to the standard 7.62x51 mm caliber in no time at all. The technology is the same of the already known SIG Sauer SLMAG in .338 Norma Magnum, although the shrunken dimensions make it comparable to an M249 (aka FN MINIMI) in 5.56x45. The impressive SLMAG was displayed too. This LMG weighing 9.1 kg unloaded in .338 Norma Magnum long range caliber with a fire rate of 600 rounds per minute and effective ranges of up to 2000 m was already presented at the AUSA Symposium in Washington, DC, at the beginning of October 2018. Unfortunately, it has not yet been possible to find out any details about the operating system, but the SIG Sauer SLMAG is probably gas-operated with a recoil reduction system. The easy-to-transport SIG Sauer SLMAG effectively closes the gap between troop support weapons and heavy machine guns in .50 BMG. It is capable of penetrating a lightly armored vehicle or a Level III body armor at a distance of more than 1,000 meters. In conjunction with all these new weapons, SIG Sauer also showed its own hybrid ammunition with a steel case base and brass case body. 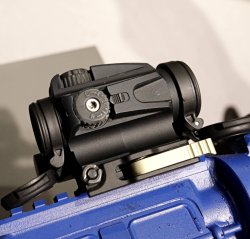 The Swedish red dot sight pioneer presented its first model with ballistic drop compensation at MILIPOL 2019. With the Aimpoint CompM5b, the dot position can be quickly adjusted to compensate the bullet drop depending on the target distance. The red dot sight is supplied with wind/lead compensation dials and includes interchangeable turrets calibrated for different calibers at different distances.

The CompM5b allows for rapid change of ammunition types and distances without having to compensate for the bullet drop or re-zeroing.

The dot is automatically adjusted when operating the turrets. The Aimpoint CompM5b is waterproof up to 45 meters and is compatible with all generations of night vision devices as well as Aimpoint's magnifiers.

Subscribe to the Newsletter
This article is also available in this language:
DERUIT