After being officially awarded a contract by the U.S. Army, SIG Sauer shows its Next Generation Squad Weapons (NGSW) rifle and lightweight machine gun prototypes, both chambered in a 6.8mm hybrid ammunition. Other two companies -  General Dynamics-OTS Inc. and AAI Corporation Textron Systems – will deliver prototypes of the weapons meant to replace the M249 squad automatic weapon and the M4 carbine.

SIG Sauer  Inc. announced the official award of a contract by the U.S. Army in the down-select process for the Next Generation Squad Weapons (NGSW), which consists of the rifle (NGSW-R) and the squad weapon-automatic rifle (NGSW-AR) that from 2022-2023 will replace the M4 carbine and the M249 SAW respectively. Just a few days ago, the US Army had selected three firms to advance to the next phase of testing: General Dynamics-OTS Inc., AAI Corporation Textron Systems and SIG Sauer Inc. The three companies have to deliver prototypes of both the automatic rifle and rifle versions of the NGSW, as well as hundreds of thousands of rounds of special 6.8mm ammunition common to both weapons. Now, SIG unveils its NGSW prototypes. 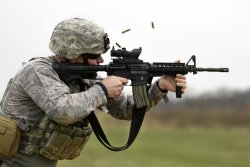 The award encompasses the complete SIG Sauer system consisting of 6.8mm hybrid ammunition, a lightweight machine gun, rifle, and included suppressors.  “At the core of our submission is our newly developed, high-pressure, 6.8mm hybrid ammunition that is utilized in both weapons, and is a significant leap forward in ammunition innovation,  design, and manufacturing,” says Ron Cohen, President & CEO, SIG Sauer, Inc.

SIG's 6.8mm hybrid ammunition is designed for increased penetration at greater distances.  According to Cohen, “using patent-pending technology the SIG Sauer Ammunition division has engineered a completely new cartridge resulting in a more compact round, with increased velocity and accuracy, while delivering a substantial reduction in the weight of the ammunition.” The final component of the SIG SAUER Next  Generation Weapons System is a suppressor designed to reduce harmful backflow and signature.