The SIG Sauer P320 polymer pistol, which was released in 2014, has become a serious competitor to the previous top dogs, and not just because of the U.S. Army'a M17 model, which was introduced three years later. The testers from all4shooters.com had the pleasure of testing the P320 XCarry Spectre and the AXG Pro, two of the latest offspring. You can read the results here.

Since its market launch, the P320 has proved to be a real stroke of luck for SIG Sauer. The unbroken demand in the LE and military sectors from day one makes it appear to be the legitimate successor to the legendary P226, and its selection as the new service pistol of the U.S. armed forces has done the rest. But unlike some of its competitors, SIG Sauer is by no means resting on its laurels or contenting itself with insignificant detail improvements here and there. Rather, the expansion of the modular gun platform is constantly being pushed forward, whereby in addition to all kinds of variants for concealed carry, there are also dedicated sporting variants such as the already presented P320 X-Five or the P320 X-Five Legion model, which is particularly interesting due to its tungsten-infused grip. 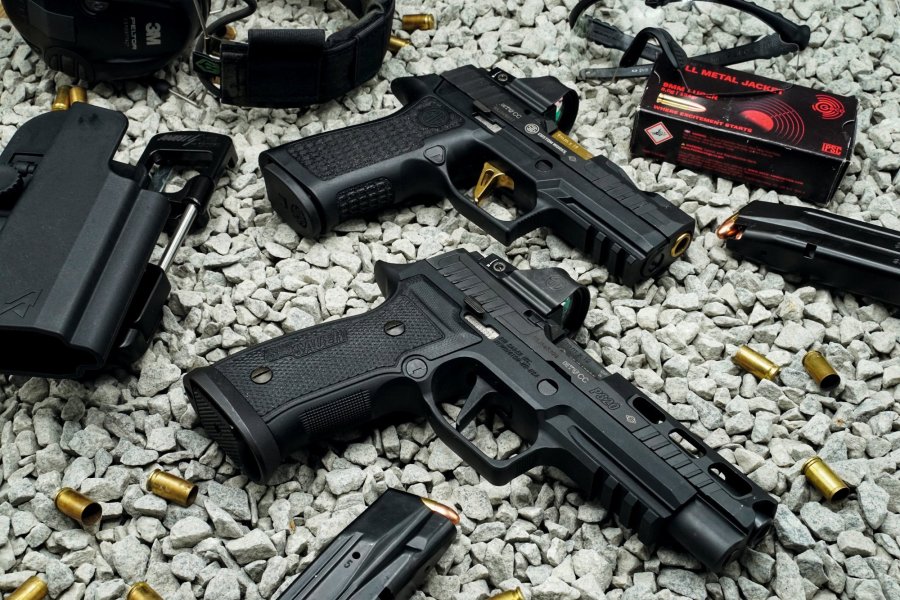 SIG Sauer's recent "Custom Works" program in the USA has even made it possible to have the P320 or the subcompact offshoot, the P365, customized to one's own liking. In the so-called "Studio", you can virtually create the gun of your dreams and combine the individual components such as the grip, slide or barrel with each other. In addition, SIG Custom Works also offers pre-configured special models, which can be identified at first glance by the corresponding laser engraving. And as if that were not enough of the innovations, the path taken with the composite material of the Legion grip module has been consistently taken to its logical conclusion and now they offer a grip module made entirely of aluminum for the P320, called AXG (Alloy XSeries Grip).

The P320 XCarry Spectre is one of SIG Custom Works' special limited editions, and the second test gun, the P320 AXG Pro, is the first full-size model based on the AXG metal grip with a long 4.7"/119mm barrel. Until now, the AXG series only included models with the shorter 3.9"/99 mm barrel. 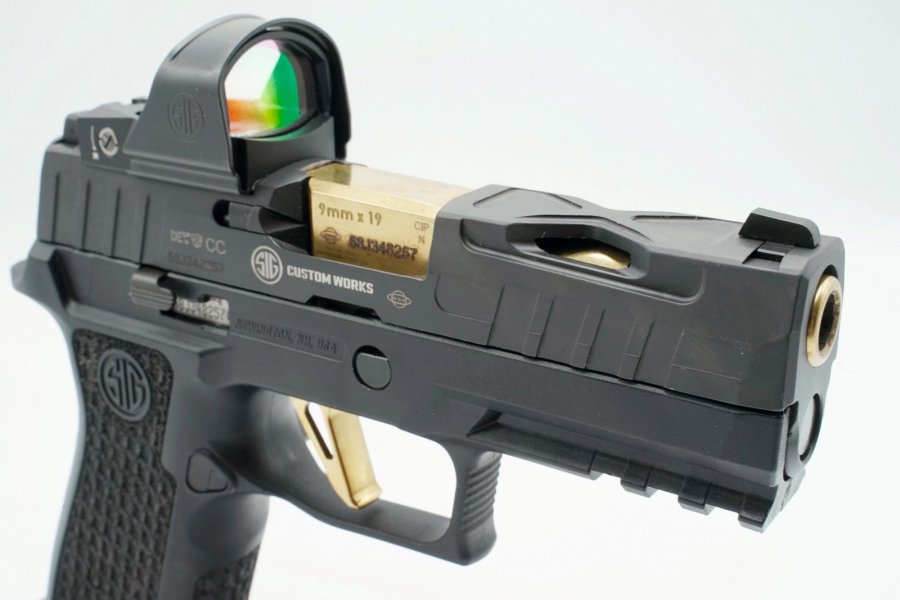 As soon as you open the gray hard case, it becomes clear that this is no ordinary P320. The barrel, which is gold-colored thanks to a TiN coating, peeks out through the various distinctive milled windows in the slide, the Custom Works logo is proudly emblazoned below the ejection port, and instead of the usual black trigger, the P320 XCarry Spectre has the skeletonized flat-faced trigger known from the P320 X5 Legion, which also stands out thanks to a gold hard coating. SIG Sauer designed this special model primarily for concealed carry and accordingly combined an XSeries Carry polymer grip with a compact-length slide. 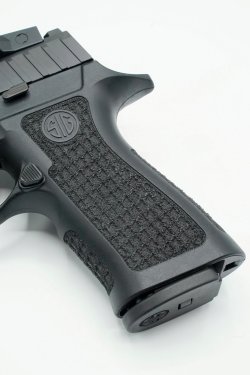 The polymer grip of the SIG Sauer P320 XCarry Spectre has been laser stippled according to the LXG texture to increase grip.

Unfortunately, the nomenclature at SIG Sauer is somewhat misleading here. The Carry grip module is not one with a reduced grip length. This is a pity, since the grip length is critical for concealed guns with regard to "printing" (i.e. the outline of a gun visible through a garment). Instead, the Carry variant is a full-size grip, with only the dust cover shortened so that more compact slide fits flush. The first real special feature is that the polymer grip has been laser-engraved on all four sides to give it a new, significantly more grippy surface texture. At SIG Sauer, grip modules engraved this way go by the name of LXG, and the surface can be compared to a rough "stippling", which is usually applied with a soldering iron. The advantage of laser engraving is the much more uniform finish. 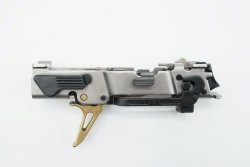 The SIG Sauer P320 series is all about the removable trigger group (Fire Control Unit; FCU). Here, the FCU of the XCarrry Spectre special model with the skeletonized trigger of the Legion version with eye-catching TiN coating.

Inside the grip, interestingly enough, a conventional Fire Control Unit does its job and not the exclusive Custom Works P320 FCU. The two can be distinguished at first glance by the TiN coating on the latter trigger unit. Although our test gun has the matching skeletonized trigger with TiN coating, the normal FCU was made of bare stainless steel. The front of the slide has been elaborately milled out with various cuts. If you look at the slide from above, they form an "X". In addition to pure aesthetics, the milling slightly reduces the breech mass, which in turn reduces muzzle flip. Furthermore, an interface for a red dot sight has been directly integrated in the rear section, which is closed with a cover plate that exactly follows the slide contours when not in use. Fortunately, the times are over when buyers of an Optics Ready SIG Sauer pistol were forced to purchase the in-house Romeo1 red dot sight by designing the optic cut only for this purpose.

SIG Sauer saw sense and not only changed the footprint of the Romeo1 MRDS for compatibility reasons, but the optics interface too, with the introduction of the PRO-Cut slide, so that the Leupold Deltapoint Pro or the Trijicon RMS/SRO red dot sight can now be mounted directly, in addition to the company's own Romeo1Pro and Romeo2 MRDS. Fortunately, the rear sight insert has also been placed behind the optic cut, so that an open rear sight can remain available as a back-up when using a red dot sight. From the factory, the SIG Sauer XCarry comes with standard-height fixed sights. The 3.9"/99 mm standard barrel with a diameter of 14 mm has been aesthetically upgraded with a TiN coating. 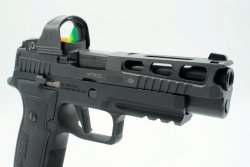 The slide of the SIG Sauer P320 AXG Pro has been intricately milled out with various windows, with a distinctive appearance. 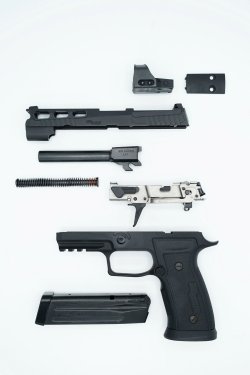 The SIG Sauer P320 AXG Pro disassembled. It is based on the aluminum grip module, with Hogue G10 grip panels and back insert added.

Even though the AXG Pro is strictly speaking a standard and not a Custom Works special model, its appearance can only be described as "loud", especially due to the massive skeletonized slide. The sides and top of the slide are pierced by large windows, with the side windows picking up the lines of the slide in an aesthetically successful manner and enlarging towards the muzzle. In addition, various millings in the serrations area and the top of the slide further reduce the slide mass. Even the front end has been elaborately milled out. The standard 4.7"/120-mm barrel with a diameter of 14 mm sits into the slide. The slide is ready for optics mounting and offers the option of using an iron backup sight when the MRDS is on. While the skeletonized PRO slide immediately catches the eye, you have to look twice or pick up the pistol to see the actual highlight in the form of the brand new AXG metal grip module. Instead of warm polymer, cold metal awaits the shooter's hand. The AXG (Alloy XSeries Grip) grip module is made of aluminum and then hard anodized black. A clean checkering on the front of the grip and grippy G10 panels along with a matching back insert (both from Hogue) provide the necessary purchase when shooting. The features of the AXG grip module are rounded out by a deep trigger guard undercut, an ergonomically designed beavertail, a reversible magazine release, a detachable magwell and the usual M1913 accessory rail on the dust cover. 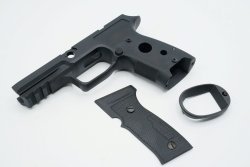 Speaking of the dust cover: this is designed in the carry length. The full-size slide used therefore protrudes beyond the end of the frame. SIG Sauer specifies the AXG as a medium size grip. Whereby we find that it is hard to compare it to the previous polymer grips. While the original polymer grip module is very round in design, the XSeries grips have a much more angular feel due to their flat side surfaces.

The AXG module, on the other hand, feels almost like a classic P226 or perhaps even more like a P226 X-Series. In terms of weight, you should not expect any miracles due to the choice of materials. Compared to an XSeries carry polymer grip module, the AXG grip weighs just 77 grams more. 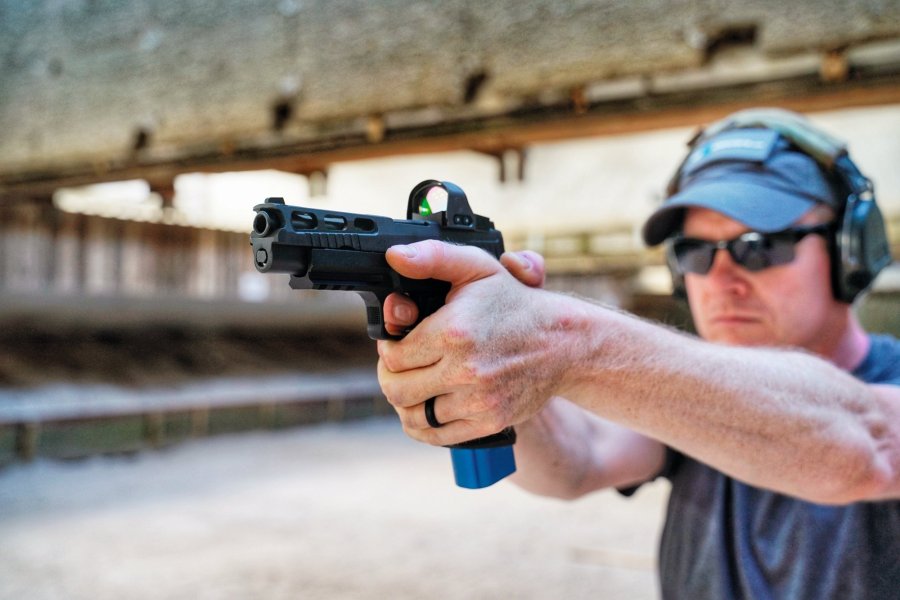 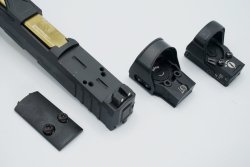 With the release of the new Romeo 1 Pro MRDS the cutout in the slide has also been changed for various models. This now acceps the Leupold Deltapoint Pro as well as Trijicon RMR/SRO in addition to the SIG Sauer Romeo 1-Pro and Romeo 2 red dot sights (pictured).

To be able to check the shooting performance, we selected four factory cartridges and three handloads in the 124- to 154-grain weight range. Both pistols were shot with the Pro Mini Red Dot Sights, always two 5-shot groupings, sitting and with the gun resting on the sandbag at 25 meters. First up was the P320 XCarry Spectre, which at 53 mm did best with the GECO 124-grain Hexagon. Following closely behind in second place was the GECO 154-grain subsonic cartridge with 57 mm.

The longer AXG Pro then had to show what it was made of. Here, the GECO 124-grain Hexagon also topped the table with 46 mm. If the first cartridge that was hand-loaded into the chamber had not separated itself from the core group, there would have been even more in it. In addition to the pure firing performance test, various dynamic standard exercises followed in order to further test the guns. The main focus was on firing strings of 5 or more rounds at targets of different sizes at varying distances in order to better assess the recoil behavior of both pistols and, above all, the effects of the weight-optimized slides and the new AXG metal grip. We also shot a drop-plate system extensively, so that our stock of test ammunition just melted away. In total, both pistols fired about 600 rounds of reloaded and factory ammunition without any malfunction. 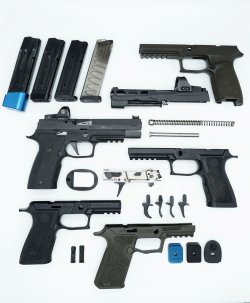 LEGO for adults: one advantage of the P320 platform is its incredible modularity and ever-expanding accessories market. No other striker fired pistol on the market is likely to be so versatile.

The AXG Pro's metal grip with its unique feel is a welcome addition to the P320 family, and the elaborately milled slide also makes it a real eye-catcher. However, it is in direct competition with the Walther Steel Frame models on the market, and SIG will probably not have an easy time of it given the price of 2,049 euros.

Nevertheless, we liked the first full-metal full-size P320 very much. Shooting with it is simply fun. The ergonomically extremely well designed aluminum grip combined with the "bite" of the G10 grip panels make for outstanding shot control and handling.

Finally, let's move on to the XCarry Spectre, which SIG Sauer wholeheartedly calls the "ultimate concealed carry weapon". In our opinion, this is certainly a bit too much of the USA-typical marketing. Especially since the exclusivity of the Custom Works special model has to be paid for. Here, 1,879 euros are due.

The bottom line is that the P320 XCarry Spectre has a neat look that stands out from the broad mass of compact polymer pistols thanks to its skeletonized Optics Ready slide, TiN-coated parts, and laser engraving.

Subscribe to the Newsletter
This article is also available in this language:
DEIT
Click here for more information on the topics:
SIG SauerPistols9 mm
That might interest you too: