After the P320-M17 (see here our test), we all knew it was just a matter of time before SIG Sauer introduced a commercial variant of  the US Military Modular Handgun System (MHS) M18 pistol, the smaller version of the M17. And here we are, with the “civiian” P320-M18. Featuring a 3.9” / 10 cm barrel, compact slide, and carry length grip module, the P320-M18 is a 9mm striker-fired pistol with an exclusive “M18-XXXXXX” serial number. It's equipped with SIGLITE front night sight and a removable night sight rear plate as specified by the MHS contract. The slide is also optic ready. Removing the rear sight assembly, the SIG SAUER Electro-Optics ROMEO1Pro Optic mounts directly to the slide.

A few days ago, SIG Sauer announced that they have completed the delivery of 100,000th M17/M18 pistol to the US Military within two years from the first delivery – SIG Sauer's P320 was awarded the Modular Handgun System (MHS) contract for the US military after a long and competitive review process in January 2017. All in all, the contract includes 238,000 pistols (231,000 M17 and 7,000 of the compact M18 version) for the Army and the Army Special Operations Command, plus another 224,000 pistols for the Navy, Marine Corps and Air Force. That brings the total number of pistols to just under half a million. 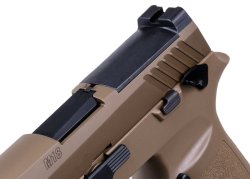 The P320-M18 is equipped with SIGLITE front night sight and a removable night sight rear plate. The slide is also optic ready.

“Since the official selection of the M17 and M18 by the U.S. Army for the Modular Handgun System (MHS), we’ve seen significant civilian interest to own both variants of the handguns.  The P320-based M17 and M18 are among the most tested handguns in history and the pair has been proven to be unmatched in both accuracy and reliability,” said Tom Taylor. Chief Marketing Officer, and Executive Vice President, Commercial Sales.

According to SIG, the new “civilian” P320-M18 “is configured nearly identically to the US military’s models and features black controls, a carry-length coyote-tan grip module, coyote PVD finished slide, and an ambidextrous manual safety.” It comes with one 17-round magazine and two 21-round magazines. The price is yet to be communicated.