SIG Sauer P320 ASP from GSG: how the air gun performed at the range

Air guns and rifles are often derided as “toys”. But that doesn’t in any way do justice to their capabilities. The new, high-end P320 ASP by SIG Sauer, for instance, even comes with a sophisticated loading system that gives shooters a genuine semiautomatic feeling. This makes it an ideal, cost-efficient alternative to training with its “real” role model. German Sport Guns has now included the CO2 gun in its portfolio. We put the air gun through its paces at the shooting range.

The SIG Sauer P320 MHS Full Size (its military designation is the M17) and P320 MHS Compact (M18) were spectacularly confirmed as the new duty pistols for the American armed forces early last year. Already the pick of the bunch among law enforcement agents as well as competitive and recreational shooters, their popularity skyrocketed after the US Army selected SIG Sauer as its official purveyor.

Fans immediately started clamoring for an air gun version of the pistols. SIG Sauer had already launched successful CO2 versions of some of its firearms. The air gun replica of the SIG Sauer P320 has now been added to the Advanced Sport Pellet line, joining equivalent variants of the P226 and the 1911. 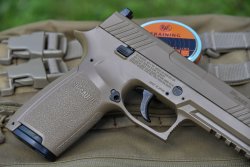 Franco Palamaro
The design of the SIG Sauer P320 ASP CO2 pistol catches the eye with its faithfully replicated controls and high-quality materials.

SIG Sauer markets the air guns with the claim: "Shoots like a SIG – because it is one." And we couldn’t agree more! The new replica air gun by SIG Sauer feels almost the same as the genuine P320 – making it ideal for cost-efficient shooting.

Click here for the SIG Sauer P320 ASP at German Sport Guns in the color variant Coyote TAN, which we took along to the shooting range. Further down you’ll find the corresponding video. The air gun also comes in black. Interestingly, GSG Premium Brands is the distribution partner for all the SIG Sauer air guns.

Previous air guns by SIG Sauer already satisfied the high standards that characterize their big brothers from the richly traditional gunsmith. They are entirely equal to their large-caliber role models in terms of finishing quality, reliability and accuracy. 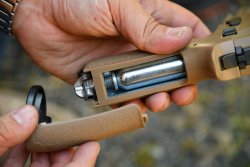 Franco Palamaro
The CO2 cartridges are simply removed from the grip of the SIG Sauer P320 ASP and replaced in the twinkling of an eye. Additional tools are not needed.

Resting in the hand, the SIG Sauer P320 ASP air gun also feels just like a genuine P320. Weighing in at 820 g, it is not noticeably different to the original (833 g). The frame is made of high-quality polymer. Bulky metal is the material of choice for the slide on the air guns. It creates an authentic shooting experience together with the powerful blowback system. The logos and slide serrations (at the front and back) are precisely where they belong as well. SIG Sauer also put some thought into the serial number, which is unique to each gun.

The trigger pull for the double-action only system is also just like the original. What’s more, fixed 3-point sights are included as yet another authentic touch. Lasers or tactical lights can be mounted on the integrated Picatinny rail below the barrel, significantly extending the potential range of uses for authentic training situations in a broad variety of shooting disciplines.

The gun’s accuracy and reliability leave no wishes unfulfilled. SIG Sauer delivers unique accuracy in the air gun segment thanks to the rifling in the barrels.

The patented SIG CO2 loading mechanism means that the cartridge is replaced quickly and easily in the receiver. SIG Sauer air guns are therefore good to go immediately, introducing impeccable functionality and practical versatility to the segment of air guns. 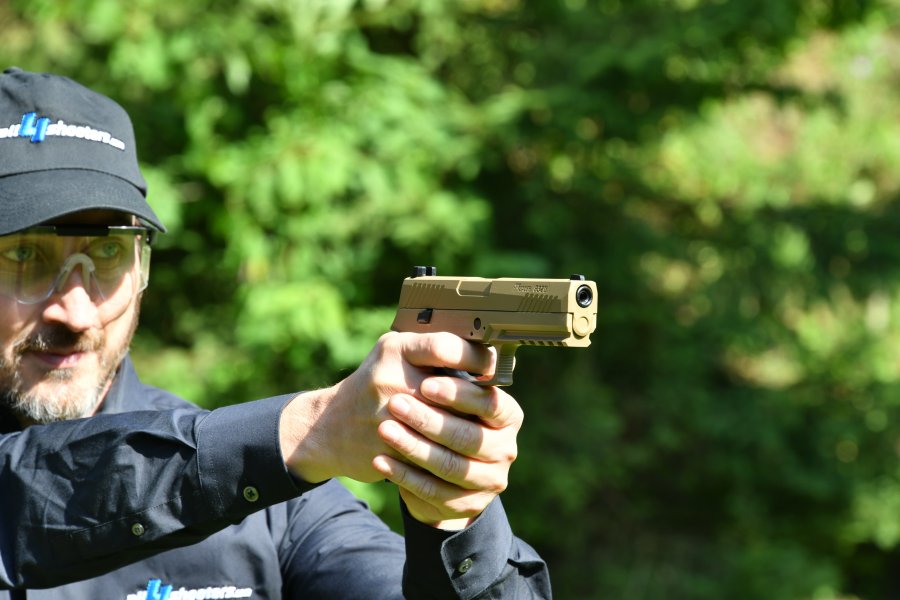 Franco Palamaro
The SIG Sauer P320 ASP feels classy and looks good, but ultimately it’s the performance that sticks in the mind. Aside from the sound, shooting the gun is astonishingly similar to the real version. 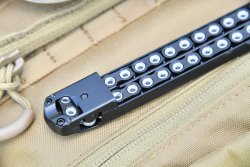 A special loading system that replicates the experience of firing a semiautomatic makes its inaugural appearance in the P320 ASP. The innovative RPM rotary magazine can hold up to 30 pellets that are then shot entirely in semiautomatic style.

Pellets are carried by the rotating magazine that rapidly and automatically feeds them into the chamber. With its staggering capacity of 30 rounds, the P320 ASP is perfect for training dynamic sports shooting disciplines.

It’s worth noting that the RPM rotary magazine is already featured in the MCX and MPX air gun models by SIG Sauer. 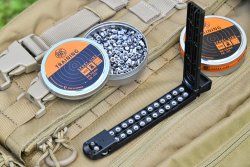 Franco Palamaro
The rotary magazine holds 30 rounds and is necessary to create the semiautomatic air gun feeling with the SIG Sauer P320 ASP.

Hobby shooters, professionals and competitive shooters can all train with this gun and save a lot of money in the process. Priced at €159.00, the P320 ASP is astonishingly inexpensive for this kind of high-quality replica.

Firing pellets, the cost of ammunition is naturally far lower than for actual rounds. So shooters can train and fire away to their hearts’ content, without burning a hole in their wallets. And what they experience when shooting the gun certainly warrants the description “authentic” – a genuine semiautomatic feeling indeed.

The semiautomatic experience is therefore real, apart from the sound of course. Whether for recreational or competitive shooters, the SIG Sauer P320 ASP provides the most inexpensive option to train efficiently and “realistically” – or simply have fun down at the range.

At the shooting range with the SIG Sauer P320 ASP air gun ...

The pistol turns us into believers at the range: Its sight picture is clear, and adopting a shooting position goes quickly. Rapid switches in target are easily manageable. All of our hits would have fit on a beer coaster at distances of 5 to 12 m. The gas consumption was reasonable, allowing us to shoot 3 magazines with just one cartridge. That’s pretty good performance for a capacity of 30 rounds, even if the loss in pressure was noticeable at times beforehand. Interestingly, steel BBs were unable to match the accuracy of pellets.

Altogether, the performance of the SIG Sauer P320 ASP at the shooting range marked it out as a durable and genuinely useful recreational and training gun. In a nutshell, it delivers real value for money.

The new SIG Sauer P320-M17, the civilian version of the US Army service pistol will be released in Europe early 2019.