The Bren Ten pistol was designed in the 1980s by combat shooting guru Jeff Cooper and chambered for what at the time was one of the most powerful cartridges for semi-auto pistols, the 10mm Auto. Its creators' intent was to revolutionize the world of service pistols – but things didn't go as hoped. Today it's one of the rarest and most sought-after modern guns by collectors.

A contribution from Giorgio Brancaglion02/27/2020

The Bren Ten pistol in 10mm Auto was manufactured by the Californian company Dornaus & Dickson Enterprises, Inc. from 1983 to 1986. The two partners of the company had a very ambitious project: they wanted to produce a defense and service pistol capable of firing ammunition with a high stopping power. It should be noted that at that time in the US most police officers on duty used .38 Special caliber revolvers (more rarely, .357), while those carrying a semi-automatic usually had a .45 ACP or 9mm pistol..

After some going around in circles, Dornhaus and Dixon turned to Jeff Cooper, at the time considered the greatest expert in combat and defensive shooting in the USA, who was already working on a similar project and who had chosen the CZ75 pistol as the basis for his gun.

So Cooper, Dornaus and Dixon began working on a gun similar to the CZ75, that is with internal slide rails, but definitely oversized to handle the new and very powerful cartridge called 10mm Auto. The genesis of the pistol's name is rather bizarre and was intended as a tribute to the British Bren machine gun, designed in Brno (Czech Republic) and manufactured in Enfield, site of the British Royal Small Arms Factory. Bren was therefore an acronym from Brno and Enfield, and seems to suggest a continuity with the country of origin of the gun chosen as a model. 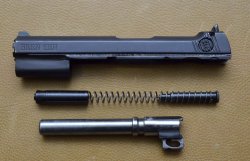 G.B., © G.B.
The Bren Ten's slide/barrel/recoil spring assembly, strongly inspired to the CZ75. The cross-bolt safety is an important variation from the Czech original model.

The Bren Ten features a single-double action and can be carried cocked and locked, i.e. in "Condition One", just as Jeff Cooper taught in his very popular tactical shooting courses designed around the Colt 1911 pistol. The thumb safety on the frame is affected by this and in fact is in an "almost 1911-like" position, easy to operate for right-handed shooters and reversible for left-handed ones. On the Bren Ten, there is also a second cross-bolt safety on the slide, which firmly blocks the firing pin and prevents accidental discharges if the gun is dropped. Strangely enough for a single-double action gun that was intended to be "the most tactical pistol”, there's no decocker.

The original 10mm Auto cartridge propelled a 200-grain bullet at 1200 fps (365 m/s) and was first produced in Sweden by Norma. Later the cartridge was adopted, on paper at least, by the FBI, but in reality it never became standard issue because of its excessive power and poor manageability, especially when fired in semi-automatic pistols.

Lots of promises but few results

The cover of the Dornaus & Dixon catalog printed in 1984, which presents all Bren Ten pistol's models and information. If possible, it's even rarer than the gun itself.

The Bren Ten was introduced on the American market in 1983 but serious technical and commercial problems immediately began to arise, probably also caused by the naivety of the owners, who had started selling the gun a year before the official presentation. In order to meet the commitments to increasingly impatient customers, many guns were delivered without magazines, with the promise to supply them as soon as they were ready. Once the impatient customers managed to get the magazines and fire the pistol, more trouble began. The extremely powerful recoil of the 10mm Auto cartridge in some cases caused the hold open latch to break and still proved to be very punitive to the shooter. Just as they had arrived, the Bren Ten's orders quickly vanished. Within three years the Dornhaus and Dixon went bankrupt, without having changed the world of service pistols at all, but having created a greedy bite for collectors. In fact, it's estimated that just about 1500 Bren Tens in both "full size" and compact version were built. This is why the Bren Ten is considered a sort of "Holy Grail" among modern guns and it's difficult to see one in the flesh.

When we heard that there were two Bren Ten pistols at the Bunker Gunstore gun shop in Milan, we couldn't resist and made a video that we want to share with you. Enjoy the watching!

Subscribe to the Newsletter
This article is also available in this language:
IT
Click here for more information on the topics:
Pistols10 mm Auto
That might interest you too: