A contribution from Pierangelo Tendas07/15/2013 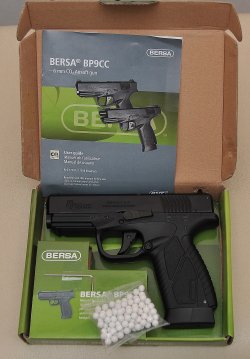 ASG – ActionSportGames A/S is a well-known Danish airsoft company, headquartered in the city of Humelbaek; since its foundation in 1990s it rapidly grew to reach market leadership positions in the field of airsoft replicas and related accessories, directly challenging the French Cybergun S.A. group for the quasi-monopoly of the European market and sealing valuable contracts with gun companies and Asian replica factories to offer exclusive 6mm BB and 4,5mm (.177) replicas of firearms and accessories from about thirty great names of the global arms industry.

One of the latest companies to reach a licensing agreement with ASG was Bersa S.A., a handgun manufacturer founded in the 1950s by three Italian immigrants – including a former Beretta technician – in the Argentinean city of Ramos Meija. Today, Bersa products are well regarded for their excellent price/quality ratio and sell well in the U.S. and south-American civilian gun markets, performing excellently in IPSC matches; several local and national Law Enforcement agencies and military units all throughout Latin America acquired considerable quantities of Bersa handguns as the years went by, and more recently the Armed Forces and Federal Police of Argentina adopted the Bersa "Thunder-9" pistol as their new sidearm to supersede the older locally-manufactured clones of the Belgian Browning "High Power" design. 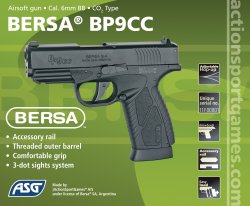 ASG - ActionSportGames, A/S
The box cover itself already sums up all the features of the Bersa BP9cc replica

Bersa's latest product, the BP9cc autoloading pistol, is notable for being the company's first polymer-framed, striker-fired handgun. First announced in late 2010, the Bersa BP9cc pistol has been officially launched on the market in the final months of the year 2011. A slim (.94-inch wide) lightweight pistol, the Bersa BP9cc feeds through a single-stack magazine holding nine rounds of 9x19mm ammunition overall, is merely 6.35" long and sports a 3.3" barrel; it became quickly popular between U.S. shooters as an effective, low-cost alternative to more famous brands' products for self defense and concealed carry, and it didn't took long for the fine folks at ASG to realize its potential on the airsoft market as well.

The 2012 IWA expo in Nuremberg (Germany) saw in fact the ASG company announce the imminent launch of an exclusive 6mm BB airsoft and 4,5mm/.177-caliber airgun replica of said sleek, compact Argentinean pistol. ASG's Bersa BP9cc replica was announced in October/November 2012 and hit the stores by the end of the year; ALL4SHOOTERS.COM was graced to receive a pre-series sample for test and evaluation about one month before, and we had time to really put it under the microscope, with impressive results indeed. 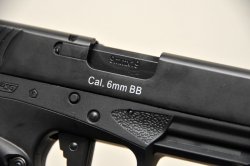 Gian Franco Serafino for all4shooters.com
The fake ejection window is marked "9x19", while a visible white stamping on the slide gives away the true nature of this replica

The Bersa BP9cc replica is extremely faithful to the original model as per markings and proportion – as usual with ASG's products. Bersa trademarks are reproduced all through the plastic frame and the metal magazine; the sample we received shown a small, corrected error on the slide itself, a distinctive trait of pre-production models. Full loaded weight of the ASG replica is close to the weight of the original Bersa BP9cc unloaded; ActionSportGame markings are located on the right side of the frame, and a white-inlaid "6mm BB" indication has been imposed on the slide right under the fake ejection port. Just like all other ASG's latest products, the Bersa BP9cc replica is identified through a unique serial number inlaid on the frame. 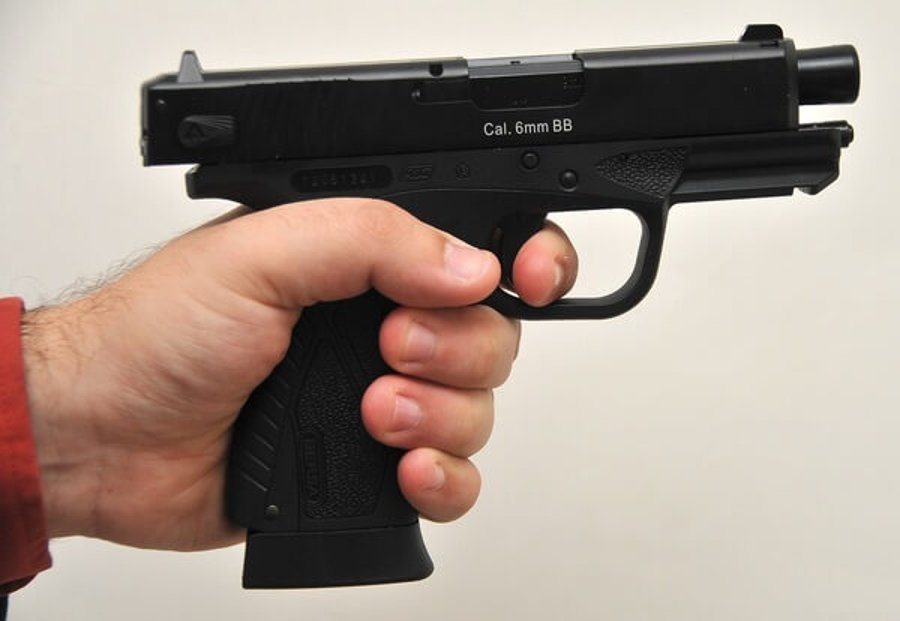 Gian Franco Serafino for all4shooters.com
The blowback ASG Bersa BP9cc replica offers one of the most realistic feelings in its category 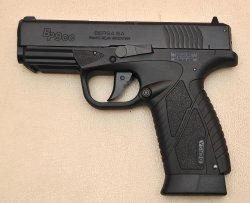 Gian Franco Serafino for all4shooters.com
Left side of the ASG's Bersa BP9cc replica: note the slight, corrected imperfection on the slide marking: this is definitely an excludive pre-series model!

ASG's Bersa BP9cc airsoft replica is available in both non-blowback and blowback variants – this last one being what we received and reviewed. It is fed through a single-stack, slim magazine holding fifteen to sixteen 6mm BB pellets, with a magazine release button located on the left side of the grip just behind the trigger guard, easy and quick to operate with the right hand thumb. The Bersa BP9cc replica is CO²-operated; standard off-the-shelf disposable, 12-grams carbon dioxide canisters will be hosted in a proper seat located on the rear part of the grip, reacheable by removing the magazine and then pressing the well-marked (it says "Push"!) button to release the grip backstrap. The CO² canister can be held in place or released for replacement when empty by tightening or untightening a screw-type pivot. 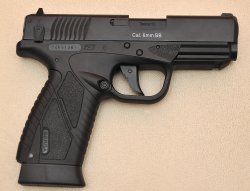 The magazine type may feel as un-realistic as it actually is – other CO²-operated replicas integrate the gas canister seat in the magazine itself to preserve realism in feel and operation – but that's a typical feature of ASG's CO²-operated replicas, and in the specific case of the Bersa BP9cc, adopting a different solution would have jeopardized overall realism in that it would have required the replica to be wider than the actual gun.

ASG' Bersa BP9cc CO² blowback replica is steep and otherwise realistic in operation when it comes to the slide blowback effect itself, although slide movement is not complete since the "chamber" won't open completely as it does with other gas-blowback replicas; it still features a working Hold-Open device anyway, and pulling the slide back will reveal a notch on the upper part of the fake ejection window for the regulation of the Hop-Up mechanism through the use of a factory-issued key. 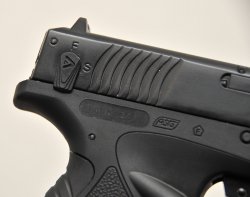 Gian Franco Serafino for all4shooters.com
The ASG replica features a two-positions manual safety switch located on the rear right of the slide; the real gun has an integral gun lock in the same position

The Bersa BP9cc replica also comes with a two-position safety switch, located on the rear right of the slide. The real BP9cc pistol features no manual safety, although in the same position it has an integral gun lock that will allow the user to secure it through a factory-issued key for safe storage, rendering the pistol inert and unoperable should it ever be stolen or accessed by unauthorized individuals such as children. Sights are integral on the slide, non adjustable, and feature white dot inlays for faster target acquisition, while a MIL-STD-1913 "Picatinny" rail for tactical accessories is located on the lower portion of the frame just in front of the trigger guard. Although the ASG Bersa BP9cc replica may be disassembled, the final owner is not supposed to even field-strip it, and as a matter of fact there are no indications on the user manual about how to proceed with the disassembly. 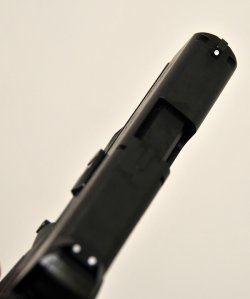 We ran an accuracy test on the ASG Bersa BP9cc by firing two full 15-rds magazines on two separate standard targets with a roughly 17 centimetres (roughly 6.6 inches) diameter printed on A$ paper sheets. The two targets were placed 5 and 10 metres (roughly 17 and 33 feet) away from the shooter respectively – distances were chosen as a compromise between the most common range for indoors airsoft plinking and the maximum range on which an airsoft skirmisher would dare to engage an opponent in MilSim with a replica pistol. We only used factory-issued BBs – the ASG Bersa BP9cc comes with a 50 BB bag included – and the Hop-Up was left on factory settings to test out-of-the-box capabilities of the replica. The CO² canister we used to power the gun was acquired in a local gun store and comes from one of the most widely available brands on the Italian market. 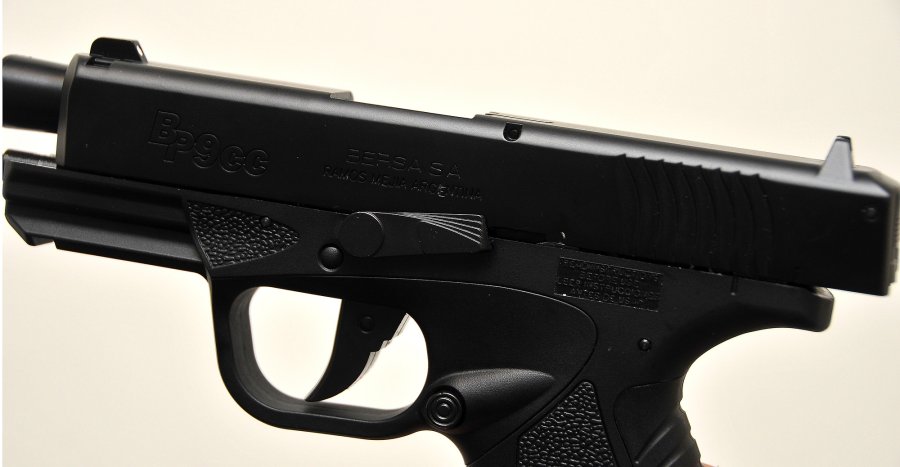 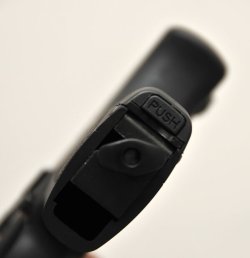 Gian Franco Serafino for all4shooters.com
Once the magazine is out, the user may operate the push-button to remove the backstrap and access the propellant canister seat

We were positively impressed by the accuracy of the ASG Bersa BP9cc replica; the pattern on the 10-metres target was pretty much wide, although two BBs fully hit the bullseye. The spread was however tight enough to let us realize how the ASG Bersa BP9cc would perform greatly in an airsoft skirmish, being fully capable to hit a human torso-sized target even at the maximum distance. On the 5-metres target we had most of the BBs into two tight patterns, more specifically five BBs on the 8 area and four BBs on the 9 area; the remaining six BBs were tightly spread around the bullseye.

Erratic performances are mostly due to a peculiar feature of this replica, that being, the particularly long, double action-style trigger pull – although definitely lighter than the DA trigger in a real gun! – which may leave many airsoft users somewhat disoriented with its very fluid first stage travel.

Gian Franco Serafino for all4shooters.com
The magazine – holding fifteen 6mm BBs – is of the quite un-realistic thin type; much of a one-way choice, as the ASG technicians decided to integrate the CO² canister seat in the grip itself rather than in the magazine in order to preserve the original thinness of the gun design

Gian Franco Serafino for all4shooters.com
A disposable 12-grams CO² canister may be used at a time; a pivot pin will hold it in place

It has a specific reason to be, though, as the early stage of the trigger pull will chamber a BB even if the shooter hasn't done it manually by operating the slide. Such a feature, which is common to many ASG CO²-operated replicas, may require some training to manage properly, and will teach some sense to all those airsoft users who handle their replicas too "lightly", paying little attention to the basic gun safety rules just because "these are not real guns after all". If anything, this feature could open another door to airsoft replicas, that being, launching them as a training aid for arms instructors to safely introduce newbies to basic gun handling safety procedures.

As "small" as it may be, ASG's Bersa BP9cc replica definitely represents one of the most interesting new products in airsoft pistols for 2012/2013. Manufacturer's suggested retail price ranged around 115 Euros when it was first announced – 125 U.S. Dollars or so – and, let us tell you, it's worth every penny. Final price would, of course, vary in different Countries and markets according to taxes and importers/distributors/retailer policies.

Gian Franco Serafino for all4shooters.com
Holding the slide in the open position will allow access to the Hop-Up regulation notch, to be operated through a factory-provided key

As of now − Summer 2013 − the ASG Bersa BP9cc is available worldwide, in all Countries that are reached by the ActionSportGames' network of authorized distributors, which also represent the only way to obtain this replica, as the company doesn't deal directly with end customers. As stated above, a less expensive, non-blowback version of the ASG Bersa BP9cc replica also exists. ActionSportGames also markets a 4.5mm/.177-calibre airgun variant of the design, not to be confused with an airsoft replica. In almost all Countries we could check, the final price isn't too far away from the MSRP, and sometimes it's even lower than that. 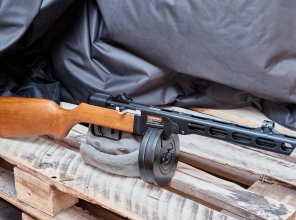 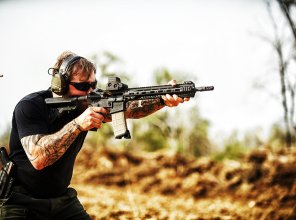 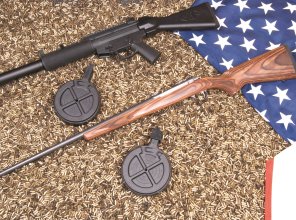 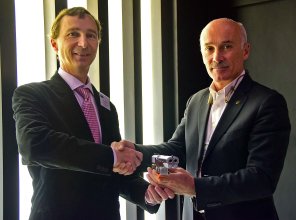 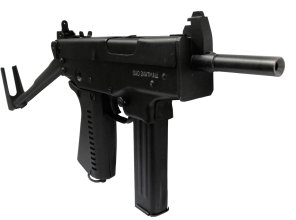 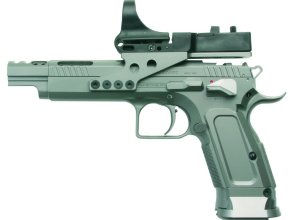