Yet another skinner? Definitely not, because every detail of this knife – designed by Israeli knifemaker Nati Amor for Spyderco – is conceived in to achieve excellent performances. It's serious money, but it's built using first-class materials. 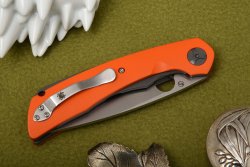 Roberto Allara, © Roberto Allara
The knife closed. The carrying clip is stainless steel – it can removed but it can't be repositioned.

Sooner or later, all hunters have to face an inconvenience: the knife falling into the grass. If this happens at dusk, and knife has a handle in neutral or even camo colors, the inconvenience is followed by a frantic search as the light gradually decreases. It may happen that you don't find the knife and leave it on the spot because if the light decreases a bit more, you may not see the way back. It's not as rare an inconvenience as you might think: a friend of mine, a mushroomer, has a small collection of knives found at the edge of the woods in areas where chamois and roe deer are hunted.

Some manufacturers, including Spyderco, made a contribution to solving the problem, providing their knives with clearly visible, usually orange-colored handles. This is the case with the Subvert, which under its orange scales features solid titanium liners. They allow the blade to be locked open using the proven liner lock system.

A blade designed to cut for a long time 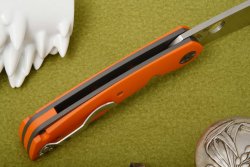 Roberto Allara, © Roberto Allara
You can see the very sturdy build of the handle: scales are G10, liners are titanium.

A skinner is a knife that has to work for a long time. With a problem: knives that cut forever do not exist and any knife gets dull sooner or later. It can get completely blunt or, if the steel is the right type, it can simply cut a little less. For this reason, the blade of a skinner is always designed to have a sharp cutting edge for as long as possible, up to the exaggeration of the so-called "Persian skinner" whose blade features a distinctive upward curve. In our case, the blade of the Subvert is crafted from CPM-S30V, a particle metallurgy Tungsten-Molybdenum-Vanadium stainless steel with a good carbon content (if it were simply a carbon steel, it would be C145), developed with the collaboration of several custom knifemakers, the best known of which is Chris Reeve. The hardness after hardening and tempering is 56-58 Hrc and everything suggests that the material would actually benefit from a cryogenic treatment.

A rare example of a folding skinner 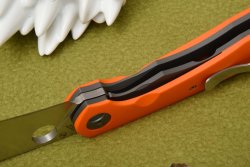 Roberto Allara, © Roberto Allara
There are no inclined planes between the liners, the lock mechanism, and the blade.

Skinners are usually fixed-blade knives: they require a cumbersome belt sheath that can be a nuisance as soon as you you change from a standing position. The Spyderco Subvert, on the other hand, is a folder. The sturdy handle does not make you regret a traditional skinner. The blade rides on ball-bearing pivot washers with a fluid and smooth motion. As for the lock, it's an original interpretation of the liner lock. The blade tang has an angle of ninety degrees and the liner cleanly snaps into place when the blade is fully unfolded. With this mechanism, the hardened steel plate that is usually attached to the liner is unnecessary. Finally, a hole through both liners ad the spacer allows for the use of a lanyard. If it is true that the devil lurks in the details, there's no room for him here.

Subscribe to the Newsletter
This article is also available in this language:
IT
Click here for more information on the topics:
SpydercoKnives
That might interest you too: 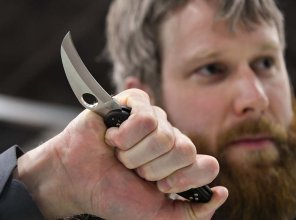 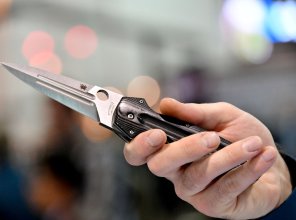 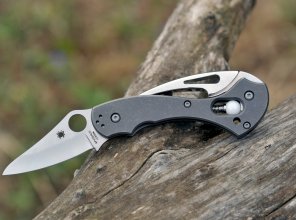