A visit to Benelli: company portrait and the new IPSC team – the Be Team – in action

Benelli Armi has been producing shotguns for hunting and sports, as well as for the military and police, for decades. The company is an international leader in the field of dynamic disciplines. This is also proven by the foundation of the new Benelli IPSC sports team, the Be Team. all4shooters.com visited the Benelli headquarters in Urbino, Italy and admired the Be Team in action. 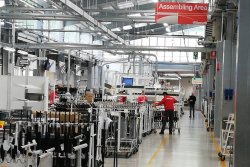 Hamza Malalla
The workshops are very quiet: here, a view of the shotgun assembly area.

If a realtor should try to sell Benelli Armi's workshops, he would describe them as "flooded with light". That would certainly be an exaggeration, but the production plant in Urbino, in northern Italy, actually looks pleasantly bright and amazingly quiet. Production there takes place in a 3-shift system. The night shift, however, is carried out exclusively by the machines. Fully computer-controlled and equipped with their own measuring equipment, the automated systems would switch themselves off in the event of an emergency as soon as the manufactured parts no longer meet the tolerance range. However, gun parts are later checked again in at least 2 stages by employees and other measuring equipment. The 3rd quality inspection before packing takes place visually. 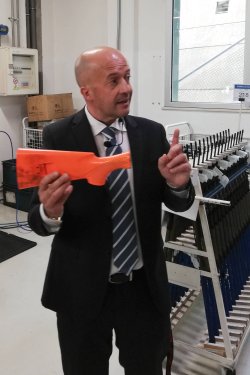 Hamza Malalla
Export manager Andrea Luini with a polymer stock for test firing. The shooting gallery is located in the factory building and uses these stocks to avoid damaging the originals.

According to export manager Andrea Luini, this is one of the most strenuous jobs in the factory, as you have to look very closely around the clock so that no guns leave the factory even with minor cosmetic defects. This visual inspection is particularly demanding for the camouflage models. Luini should know, because he had to personally go through this workstation, as well as many others in the factory, before he could become an Export Manager – at Benelli, managers first have to gain their own direct experience with the various activities in the production department.

Speaking of activities: most employees in production are responsible for tasks such as quality control or assembly right through to packaging; the actual production machines are largely self-managing. Packaging, including checking that the contents of a carton really correspond to the order and labeling, is usually the last time someone lays their hands on the gun in Urbino. That's because the warehouse is fully automatically supplied by machines until a Benelli gun goes out into the world. Sometimes they come back. But apparently not very often: the employees of the maintenance and service department dealing with guns customers complained about, seemed particularly relaxed. This may also be because, unlike in the production halls next door, very few guns or spare parts could be seen in their workshop. "Always a step ahead" is the Urbino-based company's claim about its guns. 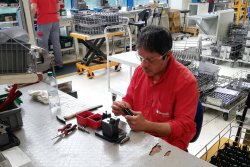 It all began in 1911 in the town of Pesaro near Rimini, Italy, when six brothers founded the "Garage Benelli" company. Shotguns were not built there, however, but motorcycles. The firearms manufacturer, Benelli Armi Spa, was established in 1967 by Giovanni Benelli. Soon the gun-maker moved from the coast inland, to Urbino. Benelli is still based there today: after the local university, the company is the second largest employer in the small town with its picturesque center and ducal palace, which are UNESCO World Heritage Sites. In 1983 Beretta bought Benelli Armi. Today, like many other well-known names in hunting and shooting guns, Beretta Holding is the umbrella company. Benelli owes its reputation to its semi-automatic recoil loading shotguns. Designer Bruno Civolani invented the "sistema inerziale Benelli" in the 1960s. At present, various series of recoil loaders are manufactured under the Benelli brand, such as the Raffaello and Montefeltro shotguns, the M2, the M3 hybrid semi-auto / pump action shotgun and the new Vinci series. In addition there are 2 gas-operated semi-automatics in the form of the M4 shotgun and the Argo rifle. They don't always have to be semi-automatics: the 828U is an over-under designed for hunting and sports shooting, as well as the Nova and Supernova pump shotguns.

On the occasion of the foundation of the sports team for dynamic disciplines, the gates were also opened for an on-site meeting. What the manufacturer's motto doesn't says is already revealed in the foyer, with the prince's portrait next to shotguns and their prototypes, and also in many model names. Benelli felt a close connection with its hometown of Urbino, a small town shaped by the early Renaissance, which owes its present face as well as its heyday to Prince Federico da Montefeltro (1422-1482). This is why some shotguns are now called Raffaello, named after the most famous son of the city, the Renaissance artist Raffaello Sanzio da Urbino. The historic old town is listed by UNESCO as world heritage number 828. The coat of arms featuring the black eagle can be found in every room of the princely palace, sometimes hidden, sometimes completely open. 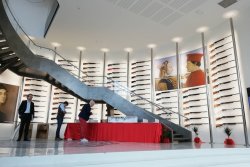 Hamza Malalla
The entrance hall at Benelli's is dominated by shotguns and their prototypes.

The reason for our visit: the Be Team – "Be fast or be last" 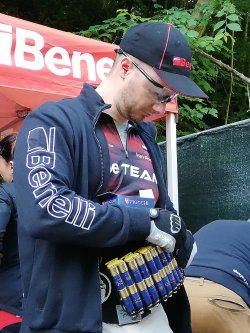 "Be fast or be the last" – Benelli has known for some time that its shotguns are not only used by the police and the military, clay pigeon shooters and hunters, but also in dynamic competitions such as 3-Gun or IPSC. But in the meantime, they have been analyzing exactly what and in what number is fired in international IPSC competitions. According to Benelli, at the 2012 World Championship in Debrecen, Hungary, the proportion of Benelli shotguns was 65%. Three years later, Agna in Italy saw 27 Saiga shotguns, 53 Molots and 235 Benellis, in addition to 57 Beretta shotguns. The Russian semi-automatics naturally dominate the open class, because they use self-loaders with detachable magazines. Benelli (or Beretta) do not have such shotguns in their catalog. In 2018, shooters won 14 silver medals and 13 gold medals in various categories with Benellis at the World Shoot in France. No question, the dynamic sports sector is developing extremely positively for the brand. The M2 Speed Performance IPSC model was recently launched to further strengthen the company's presence. In addition, the search for talented Benelli shooters from all over Europe, who are among the best in their home country as well as in international IPSC competitions, was started this year, with the birth of the Be Team. It worked: Kim Leppänen (World Champion 2016 in Standard Manual) and Englishman Jushua Kenny won silver and bronze in the Standard class with the Benelli M2 at the World Championships in France, Ivan Romanov finished 8th, Paul Sartor 18th and bronze at the German Championships. Jaakko Viitala won the world championship in Standard Manual with the Super Nova - not a bad start really...

Further information about the company and the new Be Team can be found on Benelli's website..