200 years ago, the battle of Waterloo ended an era: a colossal reenactment is to take place in June

The Belgian town of Waterloo would have never become famous if it hadn't been the theatre of a fierce battle between the French forces, under the command of Napoleon Bonaparte, and the British-Prussian alliance on June 18th, 1815. 200 years after the bloodshed that ended the Napoleonic Era, the battle will be reenacted in the place that saw the historic event take place

On June 18th thru 21th, 2015 − for the bicentennial of the battle of Waterloo − the same battlefield, which has remained basically unaltered ever since, will host an enormous reenactment of Napoleon Bonaparte's last military engagement, with over five thousands participants, three hundred horses and one hundred cannons − all open for the public to see. 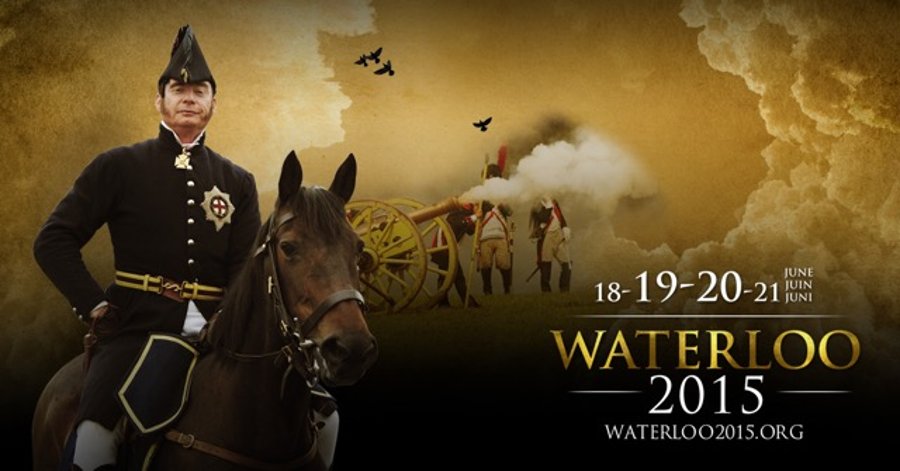 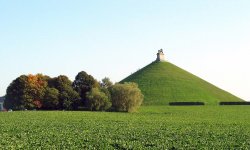 This will be the biggest reenactment show ever held in Europe.

It couldn't be otherwise, actually, considered the historic importance of the battle that put the final nail in the coffin of the Napoleonic era and marked the start of the Restoration and the return of the Ancien Régime in Europe-

Considerable efforts were put in place to organize reenactors and props to provide the most possibly realistic and faithful reconstruction of a clash that saw two armies − the French Imperial army and the British-German-Dutch alliance,  140.000 men with over 400 cannons, plus about 48.000 backup Prussian troops that joined the battle later in the day and were in fact instrumental to defeat the French forces − face each others in a field that separated them by merely eight hundred meters, truly "close quarters" by the canons of the day.

Davide Pedersoli & C., fabbrica d'armi
A modern Pedersoli replica of the Model 1777 "An.IX" flintlock muskeet, the main service weapon issued to the French infantry during the battle of Waterloo 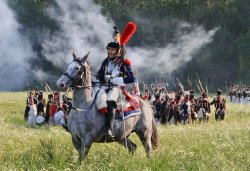 Waterloo ASBL 1815-2015
Reenactors playing a French frontline infantry movements, with a curassier at point: the level of realism is just perfect

The celebrations will start on June 18th with Inferno, a poetic interpretation of the battle of Waterloo in twelve tableaux in which the imagination, noises and colors play a central role.

On June 19th, the celebrations will reach their peak with thousands of reenactors taking place in "The French onslaught" − the first attack of over 70 thousands French Imperial frontline infantry, which charged the central position of the British-German-Dutch armies on the cry of “vive l’Empereur!”.

On June 20th, the celebrations will move to the Hougomont fortified farm, on the right side of the armies led by the supreme commander of the Coalition, the Duke of Wellington; it was located in a strategic position, and all through the battle it saw an extensive bloodshed taking place in its surroundings as the French troops tried multiple times to capture it, all to no avail.

From the archives of all4shooters.com
The desperate charge of the French heavy cavalry against the British infantry in defensive positions, in a painting of the era

From his observation point, Napoleon Bonaparte in person could clearly see the Hougomont fortified farm, and all throughout the day he sent in troops (33 batallions, up to 14 thousands men!) in a vain attempt to to force the British-German-Dutch allied armies away from there. Still today, the farm retains most of the look it had on June 18th, 1815. 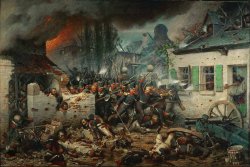 From the archives of all4shooters.com
Adolf Northern's painting depicting the final Prussian attack of the French-held village of Placenoit

In its court (missing the old wooden door of the era), at the right of the farmouse and right close to the chapel, the second  reenactment − "The allied response" − will take place.

Finally, all throughout the four days of the reenactment event, the "Biouvacs" area will be open for the public to visit: a wide thematically-organized space, it will provide a historically-accurate reconstruction of the logistics and of the daily life in the military camps of the era, and of what it could have looked like to see the great armies of the Napoleonic wars gearing up and awaiting for the great battle to break out. 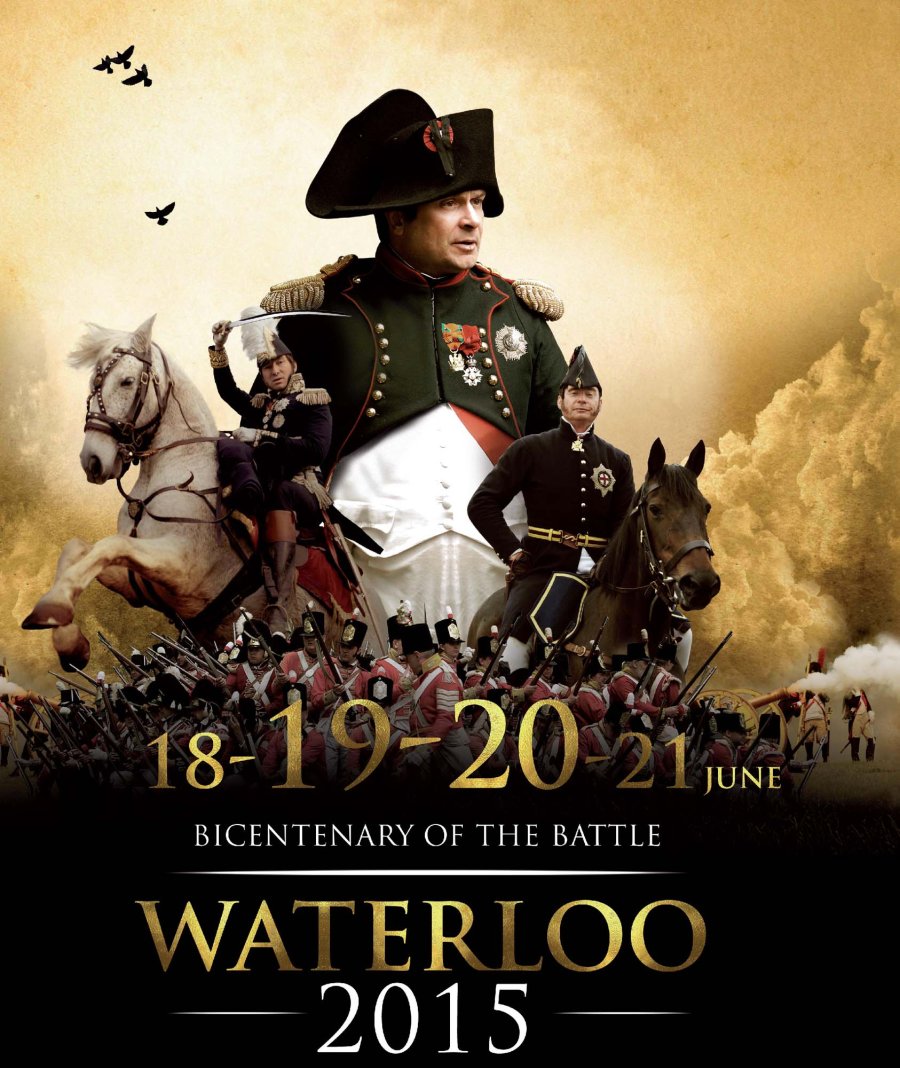 Waterloo ASBL 1815-2015
An official poster for the 2015 reenactment of the battle of Waterloo
Subscribe to the Newsletter
This article is also available in this language:
IT
Click here for more information on the topics:
EventsCultureHistorical FirearmsMilitary firearmsPedersoli DavideReplicasBlack powder
That might interest you too:

The next auction of modern and antique guns and accessories organised in England by Holts Auctioneers will be held on September  7th and 8th, and will be along the same lines as the very successful March auction, i.e. in full respect of social distancing guidelines and using a virtual connection.

The Tank Festival at the Bovington Tank Museum: unique and exciting. A special guest, the Panther “Bretagne” from the Musée des Blindés de Saumur, came to the Tankfest 2019. But there were also T-34s, the Sherman from the film "Fury" starring Brad Pitt, a Jagdpanther or a rare Japanese Ha-Go tank - and our editor Alex in the middle.

From May 3-5, 2019, Rock Island Auction Company (RIAC) will be offering for bid spectacular firearms and rare collectibles, but not just that: among the items to be auctioned off, a Soviet MiG-21 supersonic jet fighter, a U.S. M47 Patton main battle tank, and a WW2 U.S. M8 Greyhound armored car. The list is huge and impressive: here are some highlights.

The sixth edition of the IWA Shooting Day 2019 took place on the factory premises of RUAG Ammotec GmbH in the Bavarian town of Fürth. Here, the most renowned manufacturers in the hunting sector already exhibit their products one day before the opening of the IWA Outdoor Classics. A select circle of journalists had  the opportunity to see and test Merkel, Haenel, Steyr Sport, Swarovski Optik, …

On March 19, London will host an auction of ancient and modern firearms organized by Holts Auctioneers. Among the pieces put up for auction, an exceptional Express Holland & Holland Royal Deluxe in .500 Nitro Express (3 in) engraved by Philippe Grifnee. The estimated price for this masterpiece is at least 200,000 pounds, equal to about 228,000 euro. And there's more…

From February 15th to 17th 2019, at the National Exhibition Centre (NEC), Birmingham (UK), the British Shooting Show is a “Shotgun Show, Rifle Show and Airgun Show all under one roof”. From hunting and sports shooting to gamekeeping, from antique guns to optics and equipment, three exhibition halls will host the widest range of major British and international brands.

The twenty-second edition of the exhibition of art knives organized by the Italian Knife Guild will take place in Milan, Italy, on Saturday 1 and Sunday 2 December 2018, with the participation of master knife-makers from all over the world. This year for the first time there will also be an exhibition of tactical knives.

For its fifth edition which will take place in Paris, on September 15th - 16th, the FICX – International Forum of Contemporary Knives – expands the number of international exhibitors.