Steinel Ammunition, the return of extinct cartridges – The rifle calibers

Steinel Ammunition is a dynamic US company that combines the manufacturing of modern ammunition in special calibers such as the .450 Bushmaster or .458 SOCOM, with a line of rifle and handgun cartridges now considered obsolete. in this first overview we take a look at the cartridges for long guns.

A contribution from Giorgio Brancaglion05/08/2020

Until some time ago, fans of ex service guns, long or short, if they wanted to shoot, would not have had many alternatives to home reloading. Certainly, some ex-military caliber ammunition is still available for the civilian market, such as the .303 British (manufactured by Sellier & Bellot) or the 6.5 Carcano (produced by Prvi Partizan), while others are practically impossible to find. The same goes for short guns, especially pre-WW2 firearms. Unfortunately, Fiocchi Munizioni has put his "Old Time" line in the freezer and some cartridges are unavailable. Strong signs of hope come from the USA, where Steinel Ammo, based in Twinsburg, Ohio, has recently started the production of a rifle and hangun ammunition series in obsolete calibers, or specifically designed for use in antique firearms, such as the Springfield Trapdoor rifles. In this first installment we will deal with long gun ammunition.

.45/70 Government: there are no less than four loads available for this caliber used by the US Army in the last thirty years of the 19th century. This cartridge enjoys great popularity still today thanks to the widespread use of modern and safe lever guns such as the Marlin, Pedersoli and Winchester models.

The first high-power .45/70 load features a 300-gr Hornady JHP bullet and is suitable for firing in modern guns, providing a muzzle velocity of 2054 fps/626 m/s. This is followed by a 405-gr naked-lead RNFP bullet load that replicates the original military cartridge, assembled with Hodgdon powder in a Starline case. The third cartridge has a 300 grain JHP bullet and offers a lightweight, safe load for use in Springfield Trapdoor rifles for which it is specifically optimized. The exit velocity in a 18” barrel is 1410 fps, equal to 430 m/s. Finally, there is a last light-recoil, general purpose load, still with a 300 grain JHP bullet.

Let's now move on to the calibers that were protagonists of the First and Second World War: 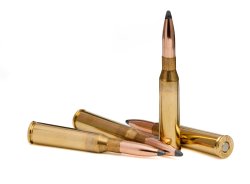 6.5x50 Arisaka. Also called 6.5 Jap, was the standard ammunition of the Japanese Army from 1897 to 1945, fired in the Arisaka Type 30 rifle and other weapons, such as sniper rifles and machine guns. The load offered by Steinel features a 140 grain soft point bullet. Muzzle velocity is 2430 fps/740m/s.

7.7x58 Arisaka. Created in 1939 to compensate for the low power of the 6.5x50 Arisaka, this cartridge had one of the shortest service lives ever – just six years. In fact, it was a copy of the .303 British and was used in the Arisaka Type 99 rifle and the Type 99 machine gun. The new Steinel Ammunition version has a 150 grain soft point bullet. V0 is 2480 fps/755 m/s. A second load assembled with Hornady 174 grain FMJBT bullets and Hodgdon powder is optimized to provide maximum accuracy in sniper rifles. Its V0 is 2380 fps/725 m/s. 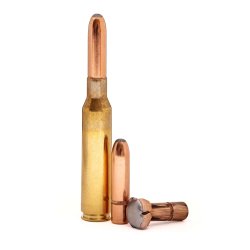 
6.5x52 Carcano. Steinel's version of the Italian standard ammunition in both world wars. features a 160 grain jacketed round nose, flat base lead tipped bullet. Muzzle velocity has been prudently kept below the original one – 1,770 fps, equal to 540 meters per second from an 18" barrel cavalry carbine.

7.35x51 Carcano. This cartridge too was born to make up for the low power of its 6.5 Carcano predecessor, as emerged mainly in the African campaign and in Abyssinia. Designed in 1938 and intended for the Model 38 rifle, this ammunition was fitted with a 128-gr Spitzer bullet. Steinel's cartrdige also uses bullets and brass manufactured by Prvi Partizan. V0 is 2440 fps/743 m/s. 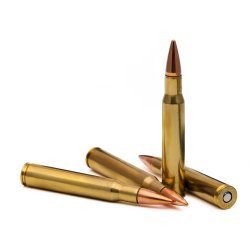 Finally, the M1 Garand M2 Ball .30-06 caliber cartridge with 150 grain FMJ bullet is optimized for use in the Garand rifle. The cartridge is assembled on a Boxer-type cartridge case with Hodgdon powder that propels the tapered-tail FMJ bullet at a muzzle velocity of 2780 feet per second, equal to 847 meters per second.

Steinel is to be credited with the great merit of having again made available ammunition now considered almost impossible to find, such as Arisaka calibers. Let us not forget that in the US WW2 Japanese service rifles are very popular, just like former US service guns. As far as we know, Steinel intends to further expand its line of rifle cartridges by adding other calibres that are unavailable at present. We think that's a very good idea: we'll keep you updated.

Subscribe to the Newsletter
This article is also available in this language:
IT
Click here for more information on the topics:
Ammunition.45-70 Government.30-06 Springfield
That might interest you too: