Brand new and already tested by us: .375 Swiss P, the new sniper caliber from RUAG Ammotec

With the new .375 Swiss P caliber RUAG Ammotec offers a performance upgrade for rifles designed for the .338 Lapua Magnum. VISIER and all4shooters.com have already been able to test the new cartridge at a shooting range in Switzerland. Read the exclusive preliminary results here.

European manufacturers are not known for constantly developing new calibers. They mostly cover existing and established calibers for the sporting, hunting and military/law enforcement sectors with their ammunition. The reason for this is simple: development and testing of a new caliber swallow up vast sums of money. Starting with the procurement or manufacture of new tools, the search for or even development of a suitable propellant powder, the design and manufacture of new bullet designs, the multi-loop testing and tuning of the new loads, and the examination of gun's mechanical loads. It is not unusual for this to cost seven-figure sums and tie up specialist personnel for months or even years. So it goes without saying that ammunition manufacturers tackle this task when there is a concrete and tangible need, such as a rapidly growing long-range community or a new caliber for an assault rifle.

The middle way: where does the RUAG .375 Swiss P rank? Comparison of the .338 Lapua Magnum (left) and the new .375 Swiss P ammunition from RUAG Ammotec.

RUAG Ammotec AG of Thun, Switzerland, which enjoys an excellent reputation in the manufacture of ammunition for government agencies, the military and special uses, has taken on this task with the development of the .375 Swiss P. The reason for this was an increase in the number of inquiries from the military/LE sector and special forces for a more powerful cartridge than the .338 Lapua Magnum.

This should have a range in the supersonic range of at least 1500 meters and, for example, with hard-core bullets, safely penetrate NIJ Level 4 ballistic vests at a distance of 600 meters. In addition to these external and target ballistic requirements, however, the weapon used should be as compact and lightweight as possible. The new RUAG .375 Swiss P cartridge, which we also see here in cross-section, propels a 350-grain bullet to the muzzle at 865 m/s.

Although the large performance gap between the .338 LM and the .50 Browning Machine Gun is adequately bridged by calibers such as the .375 CheyTac, the .408 CheyTac and the .416 Barrett, weapons in these calibers are only occasionally and hesitantly finding their way into special forces. Besides Barrett, Chey-Tac, Desert Tech, Victrix and Voere, hardly any other manufacturers have tactical precision rifles in these calibers in their inventory. In addition, the ammunition supply in Europe is extremely poor.

Special bullets in demand by the military, such as tracer, armor piercing or armor piercing incediary, are sometimes not available at all. To make matters worse, the .375 and .408 Cheytac have recently been removed from the CIP Commission's standardization. The weapons in this caliber group are also only slightly more compact and lighter than their counterparts in .50 BMG, but with significantly lower cartridge performance and choice of loads.

RUAG Ammotec therefore decided to take a different approach. The new caliber was to be compatible with common weapon systems in .338 LM. To be able to fire the new cartridge, only the barrel has to be replaced; bolt and magazine remain the same. This offers the great advantage that users can continue to use their familiar and proven weapon system. The increase in performance therefore does not require any time-consuming and lengthy tendering and testing or the cost-intensive acquisition of a new weapon system. However, the size restriction to a .338 LM action using the same bolt head and magazine imposes clear limits on the new caliber. RUAG Ammotec's target muzzle energy (E0) performance increase over the .338 LM should be around 40 percent. Assuming an average E0 of about 6100 joules for the .338 LM, the new caliber should achieve an energy of about 8500 joules from a 30-inch (762 mm) barrel. But how does one achieve such a goal when the bolt face diameter, the overall cartridge length of 93.5 mm, and a maximum gas pressure of 4200 bar are already set? It is true that a few percent more can be squeezed out of a propellant powder optimized for this caliber and a long barrel, but certainly not the desired 40 percent.

How does the RUAG .375 Swiss P succeed in improving performance?

The solution is called "rebated rim", i.e. a case with a smaller-diameter rim. Here, the case diameter above the extractor groove is larger than the diameter of the case base itself. This allows the powder chamber volume to be increased, using the same bolt head. This type of cartridge is known today primarily from calibers such as .450 Bushmaster, .458 SOCOM, .499 LWR and .50 Beowulf, intended for use in AR-15 systems. The decisive factor here is the overall cartridge length.
At the beginning, the theoretical calculations had to be verified in tests. Since this is a new development, it was not possible to use cases in this caliber. Therefore, as is usual in ammunition development, a case of a similar type was sought. The choice fell on the .500 Jeffery (12.7x70 mm). After the Jeffery cases were modified accordingly and their necks were adapted, the first tests in terms of accuracy and range took place with 22.7 gram (350 grs) HPBT match bullets.

After successful completion of the preliminary tests, the development of a full metal jacket and a hard core bullet began. Since there are reservations about HPBT bullets with lead cores even for sniper applications in numerous countries, a full metal jacket bullet with equivalent accuracy performance is needed. In addition to maintaining the lowest manufacturing tolerances and the most aerodynamic bullet tip geometry possible, the position of the bullet's center of gravity is also of great importance for the accuracy that can be achieved. The center of gravity should be shifted as far as possible toward the rear of the bullet. In the case of a hollow point boat tail design, this is achieved by positioning the lead core slightly back, leaving the front part of the bullet tip hollow. For its new full metal jacket bullet RUAG Ammotec therefore relies on a metal sphere in the bullet tip, which forms a void volume there and also has a lower density than the lead core. In addition, a process was developed to minimize the variation of the bullet tip geometry so that CW values within a bullet lot vary only minimally – an important condition for repeatable shooting results at long ranges. RUAG Ammotec even succeeded in improving the ballistic coefficient of the full metal jacket bullet compared to the HPBT bullet.
RUAG Ammotec applied a new bullet design not only to the full metal jacket bullet, but also to the hard core bullet, which is very important for military operations. With this type of projectile, it is primarily a matter of penetrating power – through glass or protective vests, for example. The Hecate II from PGM served as a test rifle for the RUAG .375 Swiss P.

The VISIER team already saw for itself the reward for its efforts in the summer of 2020 at a shooting range in the Swiss Alps. At ranges of up to 1500 meters, targets of one angular minute in size could be hit consistently. The test rifle in the form of a PGM Mini Hecate II shot very comfortably thanks to its effective muzzle brake, and its recoil impulse was roughly on a par with that of a .338 LM. Not only on paper have the developers succeeded in their ambitious goal of developing a high-performance cartridge for ranges up to 1600 meters. Our compliments.

Conclusion after the first test of the RUAG .375 Swiss P

With the newly developed .375 Swiss P and two new bullet designs, RUAG Ammotec has once again proven that it is rightly one of the leading ammunition manufacturers in the military and law enforcement sector. Overall, the .375 Swiss P caliber represents a low barrier to entry for firearms manufacturers, as essentially only one specific barrel is required for a firearm in .338 LM. Users benefit from increased performance with virtually the same weapon and ammunition weight, and factory ammunition at a corresponding price.
(For the complete article in German language with all the facts on the development, technology and shooting behavior of the .375 Swiss P, as well as extensive measured values, diagrams and tables, see VISIER 4/2021. It can be ordered from the VS Medien Shop.)

Further information can be found on the RUAG Ammotec AG website.

Subscribe to the Newsletter
This article is also available in this language:
DEIT
Click here for more information on the topics:
RUAG ammunitionAmmunition.375 RugerPro-zone
That might interest you too: 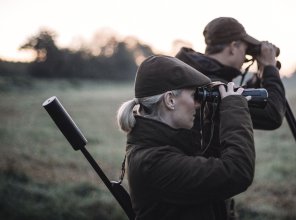 Since 2014, RUAG Ammotec has been the main strategic sale partner for the successful family-owned company Hausken, which specializes in the development and manufacture of suppressors. With the brand takeover, manufacturing and marketing activities will now be further expanded, RUAG Ammotec informed in a press release. Read more about the acquisition here. 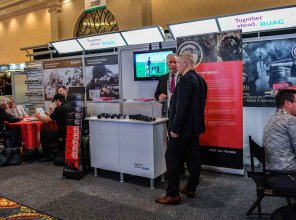 SHOT Show 2018 / New from RUAG Ammotec: the ammunition manufacturer exhibited its GECO and Swiss P brands in its booth at this year's SHOT Show in Las Vegas. And there was a real novelty: GECO introduced its Sport Optics range for the first time in the US market 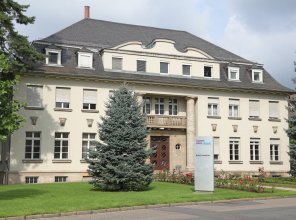 Christoph Eisenhardt is the new CEO of the RUAG Ammotec division and member of the RUAG Group Management in Switzerland. He follows Cyril Kubelka, who very successflly held the position since 2004. Mr. Eisenhardt will take up his new position on 1 October 2017. 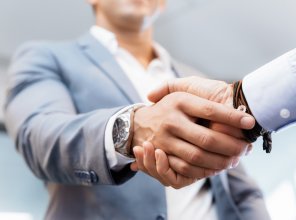 Amotfors (SE), Berne (CH) 03.04.2017. RUAG Ammotec acquires the remaining 60% of shares of Gyttorp AB as of 31 March 2017, thus becoming the sole owner of the company. Gyttorp is a leading distributor of hunting and shooting products in Sweden and Finland. 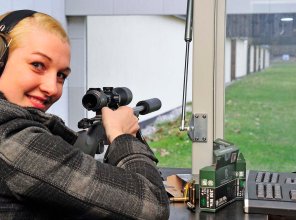 Update: Video on news RWS Ammunition, Blaser F16, Leica and Kahles Helia, Norma, Merkel and Harkila.For the fourth time now, the International RWS Shooting Day was held on the premises of RUAG Ammotec in Fürth. During this event, major manufacturers in the hunting sector, such as RWS, NORMA, BLASER, MERKEL, ZEISS, SAUER, MAUSER, KAHLES, HÄRKILA, LEICA and GRS showcased their new products for 2016 … 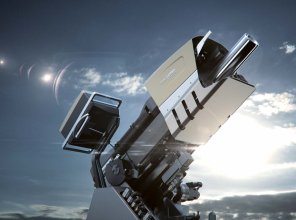 ruag-ammunition02/23/2015IDEX 2015: RUAG presents its COBRA mortar system at IDEX and strengthens its presence in the Middle East

RUAG is placing the focus on its COBRA mortar system at the IDEX International Defence Exhibition and Conference in Abu Dhabi. At the same time, it is strengthening its presence in the Middle East with its own subsidiary in Abu Dhabi (UAE). All five of RUAG's divisions – Space, Aerostructures, Aviation, Ammotec and Defence – are present at IDEX.