Introduced thirty years ago, the .40 Smith & Wesson was strongly supported by the FBI, in search of a cartridge that would guarantee immediate stopping power. At first received triumphantly by both the law enforcement and civilian sectors, over the years its nervous behaviour and operating costs have relegated it to a subordinate position compared to the 9x19 mm Parabellum, that has instead regained popularity.

A contribution from Giorgio Brancaglion10/20/2020 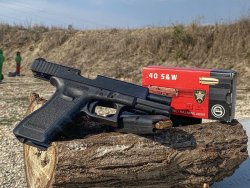 A GLOCK 22 in .40 Smith & Wesson together with a box of Geco cartridges.

A couple of weeks ago, GLOCK introduced its new Gen5 pistol models G22, G23 and G27 in .40 S&W. Yet, it was observed that during the firearms and ammunition rush that preceded the Covid lockdown in the USA, the only ammunition left sitting on gun shop shelves was the .40 Smith & Wesson. This is despite the fact that in the first half of 2020 the sale of ammo in the USA increased by 92.4%. An unhappy fate for the .40 Smith & Wesson caliber, which may need some explanation.

A cartridge born out of a shootout

The .40 Smith & Wesson is a typically American creature and was wanted by the FBI following the infamous "1986 Miami shootout", where a couple of criminals killed two police officers and seriously injured five, despite the fact that the criminals had been hit multiple times. The feds attributed this catastrophe to the low power of the 9x19 caliber ammo fired from police officers' guns and began to look around for a cartridge with greater stopping power. At first the FBI decided to adopt the 10mm Auto cartridge, designed in 1983 by Jeff Cooper for his Bren Ten pistol and commercially developed by Swedish Norma, but soon this ammunition proved to be excessively powerful and hard to manage, both for guns and shooters. The FBI then commissioned Federal to develop a lighter load of the 10mm Auto, which was less punitive but not completely reliable. Meanwhile, Robert Klunk, a Winchester Olin R&D engineer working with Smith & Wesson at the time, discovered that by shortening the 10mm Auto cartridge case from the initial 25.2 mm to 22 mm, it was possible to maintain cartridge performance in a relatively small footprint. Unlike the 10mm, the new cartridge used small pistol primers instead of large pistol primers. This new cartridge would go down in history as the .40 Smith & Wesson.

A promising debut, a difficult life 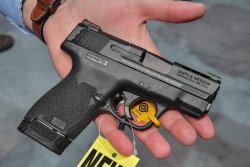 The .40 Smith & Wesson caliber and the first gun designed to fire it, the S&W 4006, were presented at the SHOT Show in January 1990. In its original version the cartridge, manufactured by Winchester Olin, had a JHP 180-grain bullet pushed at 950 fps, or 290 meters per second. The great interest aroused by the new cartridge, thanks to the more or less voluntary endorsement by the FBI, soon became a great commercial success. GLOCK brought to the market two models chambered in .40 Smith & Wesson, the G22 and G23, which were officially adopted by the Federal Bureau in 1997. In short, all firearms manufacturers that were interested in the huge LEO market, rushed to add .40 Smith & Wesson caliber guns to their product range. For a short period of time the US Army itself, in view of the competition for the adoption of a new service pistol to replace the Beretta M9, considered the possibility of adopting a .40 Smith & Wesson gun.

But in 2014 the news that – perhaps – nobody expected came: the FBI announced that they would go back to 9mm caliber pistols and would launch a tender for that. In 2016 the tender was won by GLOCK, with its 17 and 19 9mm models, which were also joined by the sub-compact models 26 (with two-stack magazine) and 43 (with single-stack magazine).

A question of budget, as always

But why this return to the old days? There are many reasons, here are the main ones. 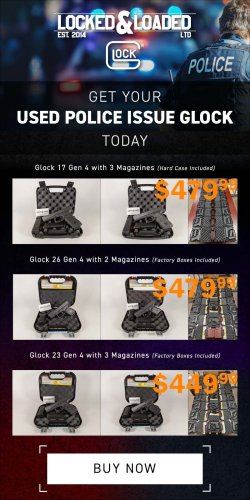 Advertisement of a US distributor selling GLOCK pistols retired by the police.

First, the cost of ammunition: not even the FBI has an inexhaustible budget, and neither all the local police agencies that adopted the .40 S&W to follow the Bureau's decision do. Not only is .40 S&W ammo more expensive than 9mm, but because of the more noticeable recoil and muzzle jump, training an officer to shoot with this caliber takes more time and more rounds. And that's the second problem with the .40 Smith & Wesson: compared to 9mm: it's far more challenging and hard to manage, without offering a corresponding increase in performance. When we talk about performance, we imagine that the various US police agencies can use expanding ammunition specifically designed for defensive shooting. Over the last few decades, the performance of defensive bullets designs has increased, so today expanding 9mm bullets are considerably more effective than those on the market thirty years ago.

The FBI also conducted tests by having some operatives perform shooting drills with both 9mm and .40 caliber pistols. The result, quite obviously, was that most shooters fired faster and more accurately with the 9mm.

Now let's talk about magazine capacity: for the same size, a GLOCK 17 in 9mm has a magazine capacity of 17 rounds against the 15 of the model 22 in .40 Smith & Wesson. It may seem a small difference, but considering that according to FBI statistics, 70 to 80% of shots fired by agents during a firefight miss the target, even just two more shots can make the difference. In addition, if the higher round capacity is added to the higher probability of hitting the target and the shorter time required to do so, the scale tilts sharply toward the 9mm 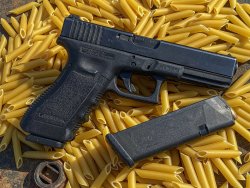 In the US the .40 caliber is sitting on the shelves at present.

Also, many Smith & Wesson .40-caliber guns are derived from 9x19 mm caliber models. This carries a risk of premature wear and tear due to the stress of firing. So you will have a greater need for maintenance, which means spending more money.

Therefore, the .40 Smith & Wesson has been abandoned by the FBI and by many other security agencies essentially because of cost issues. But in the civilian market, how should it be considered? 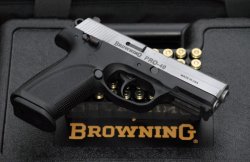 The .40 S&W offers great stopping power in compact guns like this Browning Pro 40.

We asked instructor and operational shooting expert Biagio De Santis to give his opinion on the .40 Smith & Wesson from a defensive point of view. "The .40 S&W is the result of the FBI's request for a more effective ammunition with the same advantages in terms of power of the .45 ACP but allowing for higher magazine capacity and better shooting controllability even by personnel who were not particularly experienced or well trained. Unlike other intermediate but more powerful ammunition, such as the 10 Auto and the .41 Magnum, it soon became a true best seller among defense and law enforcement cartridges. Although it was at its best with controlled-expansion ammo, even with full metal jacketed bullets it was often recognized as having a superior terminal ballistics over both the 9mm and the .45 ACP. But the years have passed and the increasingly weaker grip techniques transposed from action shooting to police and defense shooting have made this ammunition less controllable and less accurate for the less experienced, who are the majority of users. The standard .40 S&W is a +P cartridge, after all. The new controlled expansion bullets with greater damage capacity in the more controllable and economical 9 Parabellum/9 Luger caliber, have brought both citizens and many law enforcement agencies, with the FBI in the lead, to the abandonment of the 10x22 mm aka .40 S&W cartridge.

The .40 Smith & Wesson on the civilian market 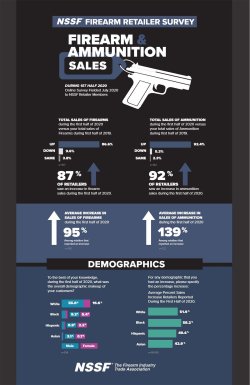 gbran
A chart from the NSSF showing trends in US firearms and ammo sales in the first half of 2020. Guns sales increased by 95%, ammunition sales by 139%!

The .40 Smith & Wesson in itself is an excellent cartridge, with good intrinsic accuracy. It is very versatile too, thanks to the availability of commercial loads with bullets weighing between 155 and 200 grains. For those who reload their own ammunition, this is even broader, although the cost of components is higher than with the 9mm. Certainly, the fact that in Europe the use of expansive bullets for personal defense is not allowed, considerably reduces one of the advantages of this cartridge – namely, its great stopping power.

As for competition shooting, the .40 Smith & Wesson cartridge has enjoyed some success in dynamic shooting where it can compete in the "Major" power factor category, which allows shooters to receive a higher score for peripheral hits on targets. The power factor is calculated by multiplying bullet weight in grains by velocity in feet per second, and dividing the result by 1000. We asked our colleague Tino Schmidt, German dynamic shooting champion and editor of "Caliber" magazine to give us his opinion on the .40 Smith & Wesson based on his experience as a shooter: “The .40 Smith & Wesson is a cartridge suitable for IPSC shooting in the Standard and Classic divisions. It is the smallest caliber (.400") with which you can achieve the Major power factor, which can give you higher points for hit placement. Before the .40 caliber became popular, shooters must use the .45 ACP to achieve the Major power factor. With the same magazine size, the .40 S&W offers a capacity of 1 or 2 more cartridges than the .45 ACP. This brings some advantages in IPSC as it allows more shots to be fired before the magazine has to be changed. This is why many IPSC shooters use this ammunition, especially in the Standard Division, although it is not exactly pleasant to fire, especially if Major power factor cartridges with bullets weighing more than 180 grains are used.”.

A future of lights and shadows 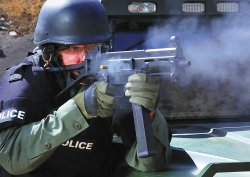 Unlike other intermediate cartridges born towards the end of the last century, such as the .41 Magnum, the .356 TSW, .357 SIG and the 9x22 Fiocchi Major, which remained niche products and in some cases disappeared from the market in a short time, the .40 Smith & Wesson caliber was an immediate and lasting success, but it began to fade more for economic and practical reasons.

While the .40 Smith & Wesson today has certainly lost much of its importance in the world of civilian defense guns and law enforcement, in dynamic shooting disciplines it seems that its career is still capable of giving some satisfaction.

Ironically, the 10 mm Auto is still serving in the FBI hostage-rescue team today, chambered in a special version of the Heckler & Koch MP5 submachine gun, even if the .40 Smith & Wesson was retired just thirty years after its birth. But who knows, the world of firearms is made up of cycles and sometimes turnarounds. Thirty years ago, striker fired guns were considered outdated, and those with polymer frames were still seen as an oddity that would not last long, yet today they are the rule both in the world of law enforcement and among civilians. Everything goes forward, but some things come back sometimes.

Subscribe to the Newsletter
This article is also available in this language:
DEIT
Click here for more information on the topics:
Ammunition
That might interest you too: