Steinel Ammo, the return of the extinct cartridges: pistol and revolver ammo

Some cartridges for service handguns are no longer available on the market and can only be handloaded. Luckily, the American Steinel Ammo company finally makes some "old glories" available as commercial reloading.

A contribution from Giorgio Brancaglion05/28/2020

We already told you about the cartridges in obsolete rifle calibers manufactured by the US company Steinel Ammo. In this installment we are dealing with handgun cartridges instead. The philosophy at the base of this is always the same – that is, making again available cartridges that are now almost impossible to find. 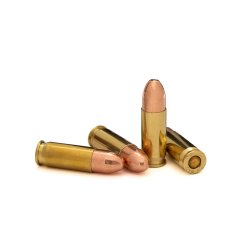 Despite its “French” name, the cartridge was actually designed in the USA in 1917 for use in conjunction with the Pedersen device, which allowed the Springfield 1903 bolt-action rifle to be transformed into a semi-automatic weapon on the battlefield, albeit with a shorter range and lower power. The end of the conflict set the promising project aside and led the US military to attempt to fob off the Pedersen device on some allied powers. In 1918 a demonstration was organized in Le Mans, France, in which many senior officers including General Pershing participated, during which the Pedersen device proved its effectiveness, but in the end nothing came of it. Only its cartridge would be adopted by France, to be used both in the SACM 1935 A and MAS 1935S pistols and in the MAS 38 submachine gun. It must be said that some sources consider the 7.65 MAS an independent French project, identical to the American caliber only by coincidence. The fact is that this cartridge remained in French service until the 1960s. The original cartridge propelled a 77-grain bullet at a muzzle velocity of 345 meters per second, with an energy of 298 joules. But we come now  to the Steinel cartridge: based on a Starline case, it pushes a 110-grain copper-plated lead bullet at a muzzle velocity of 1000 fps (304 m/s) with an energy of 330 joules 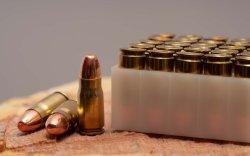 © Oleg Volk
The revival of the 8mm Nambu cartridge is not a novelty in the strict sense, it was in fact produced in the USA by X-Caliber, a company that later became Steinel Ammo.

We now come to another military handgun cartridge, designed by Kijirō Nambu, an officer of the Japanese imperial army and certainly the most influential firearms designer in 20th-century Japan. He designed practically all of the Japanese army's service weapons from the beginning of the 20th century to the end of the World War 2, from the Type 92 and 14 pistols to the Arisaka 38 and 44 rifles as well as the Type 11 and Type 99 machine guns.

The 8 Nambu cartridge was born in 1902 along with the Type A pistol, and is built on a bottleneck semi-rimmed casing. The original version propelled a 102-grain bullet at an exit velocity of 290 meters per second, with an energy of 279 joules – a typical handgun cartridge performance at the time. In the version revived by Steinel, the cartridge pushes a full metal jacketed 83-grain bullet at a muzzle velocity of 1040 fps (317 m/s), with a muzzle energy of 271 joules. No doubt this loading will be welcomed by the US enthusiast market, as there are still a lot of Nambu guns in the USA brought back home by soldiers at the end of World War 2. Until now, you had to reload to fire them.

Old glories of the British Empire

As far as revolver cartridges are concerned, Steinel proposes two calibers for service British Empire revolvers, the .38/200 and the .455 Webley. 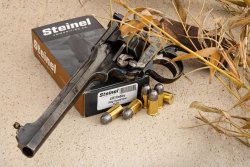 © Oleg Volk
The British .455 Webley cartridge with 265 grain bullet, here next to a Webley Target revolver.

But let's go in chronological – not in caliber – order: the .455 Webley cartridge was developed in England in 1891 for the Webley Mk I revolver and remained in service with the British Army until the end of World War 2, where it was paired with .38/200 caliber revolvers. Manufactured by several manufacturers over the years, the standard .455 Webley cartridge perfectly represented the "slow and heavy" ballistic theory. It propelled in fact a massive 265-grain unjacketed lead bullet at a placid velocity of 180/210 meters per second, with an energy of about 290/390 joules. Over the years, the cartridge was developed in several variants, among which a 218-grain "Manstopper" version featuring a hollowbased bullet, prohibited by the Hague Convention of 1899. For military use, therefore, a version with a 265-grain jacketed bullet was also designed. Production started in 1939 and it was used for the entire duration of World War 2.

The replica of this cartridge is extremely faithful to the original and features a 265-grain unjacketed lead bullet on a Starline case. Muzzle velocity is 660 fps (183 m/s) with an energy of 288 joules. 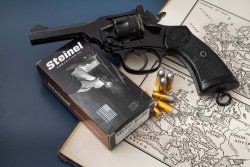 © Oleg Volk
One of the revolver cartridges that come back thanks to Steinel: the .38-200, which was a British service cartridge from 1922 to the 1960s, chambered in Webley and Enfield revolvers.

The .38/200 cartridge was developed just after the World War 1, when the British General Staff, usually very cautious in adopting novelties, surrendered to the evidence that large and heavy revolvers like the Webley Mk I, although effective in short range fighting, were now obsolete. It was therefore decided to adopt lighter and handier revolvers and a more compact cartridge. The .38 Smith & Wesson, a caliber already on the market for over 40 years and well tested, was chosen. The original cartridge mounted a relatively heavy, 200-grain unjacketed lead bullet, which was used in Webley Mk IV and Enfield No. 2 revolvers. The Steinel load is very faithful to the original too: the Starline cartridge case holds the 200-grain lead bullet with a light crimp, which in 3 ¼” barrels exits at a muzzle velocity of 590 fps (198 m/s), developing an energy of 255 joules.

The 9mm Largo: born in Germany, lived in Spain 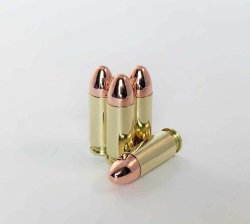 © Oleg Volk
Thanks to Steinel Ammo, also the 9 Largo, alias 9x23, which was used in several Spanish pistols, but also in rifles and machine guns, is back.


Finally, in the Steinel catalog dedicated to obsolete handgun cartridges we find the 9mm Largo, alias 9mm Bergmann-Bayard, a cartridge dating back to 1901 and well ahead of its time.

Chambered in the Bergmann-Mars pistol and developed at the same time, this cartridge was extremely powerful, pushing a 127-grain bullet at the considerable velocity of 356 meters per second, for an energy of 521 joules. In 1905, the Spanish army officially adopted the Bergmann-Bayard pistol, which in the meantime underwent minor modifications and a change of suffix. The 9-caliber Bergmann-Bayard began to spread quickly among the armed forces and police, and several Spanish firearms manufacturers such as Star, Campo Giro, Astra and Llama began to produce semi-automatic pistols, but also bolt-action rifles and machine guns in 9 "Largo" – which in Spanish means "long",  to distinguish it from the 9 Luger (9x19mm). The 9 Largo cartridge remained in active service with the Spanish army from 1907 to 1981, the year when the Fabrica Nacional de Toledo manufactured the last batch of cartridges for the military.

The version produced by Steinel is assembled on a Starline case with a 124 grain copper-plated bullet pushed at an initial velocity of 1100 fps (335 m/s) for an energy of 453 joules.

All Steinel handgun cartridges are sold in packs of 50 rounds.

Visit the company's website to find out more: www.steinelammo.com

Subscribe to the Newsletter
This article is also available in this language:
IT
Click here for more information on the topics:
AmmunitionWebley & Scott
That might interest you too: