This "made in USA" rifle cartridge was created by Bill Wilson by loading a .30" bullet into a .223 Remington casing. If it sounds like you've heard it before, you're right – it's the same principle as the 300 Blackout, but the result is not quite the same. Let's take a look at a few more details about this ammunition.

A contribution from Giorgio Brancaglion12/14/2021

The 300 HAM'R is a relatively new cartridge to the market that is driving Americans crazy, fascinated by the fact that it was created by the Bill Wilson who is world famous for the quality of his 1911-style pistols. Bill Wilson is not only a great gun technician, but he is also a passionate hunter of wild boars, which abound in the surroundings of his Texas ranch. After trying all the possible cartridges, including the 300 Blackout, Bill decided to make a new one, called 300 HAM'R. The development of the cartridge lasted more than a decade and ended in 2018 with the official presentation on the market. The name is composed of bullet diameter and the contraction of the English term "hammer", with a clear allusion to the mighty weapon of Thor, Odin's son.

300 HAM'R, similarities and differences to the 300 BLK

The proprietary 300 HAM'R cartridge is manufactured by Wilson Combat in about 20 different loadings, with bullet weights ranging from 95 to 150 grains.

The 300 Blackout, abbreviated as BLK, was born as a cartridge for military and law enforcement use, developed on the basis of the .300 Whisper subsonic cartridge conceived by J.D. Jones for use in suppressed weapons. The idea of the 300 Blackout is to create an ammunition that can be fired in M4 rifles while maintaining the 30-round magazine capacity, but with a much heavier and more massive projectile than the .223 Remington. The solution was put into practice by shortening the .223 cartridge case to a length of 1.368”/34.7 mm and fitting it with a 7.62mm caliber bullet. Over the years, numerous variants of the 300 BLK have been developed with both subsonic and supersonic loads, with bullet weights ranging from 110 to 220 grains. A standard commercial loading of the 300 BLK has a 147-grain FMJ bullet  propelled at an initial velocity of 580 m/s for an initial energy of 1602 joules. 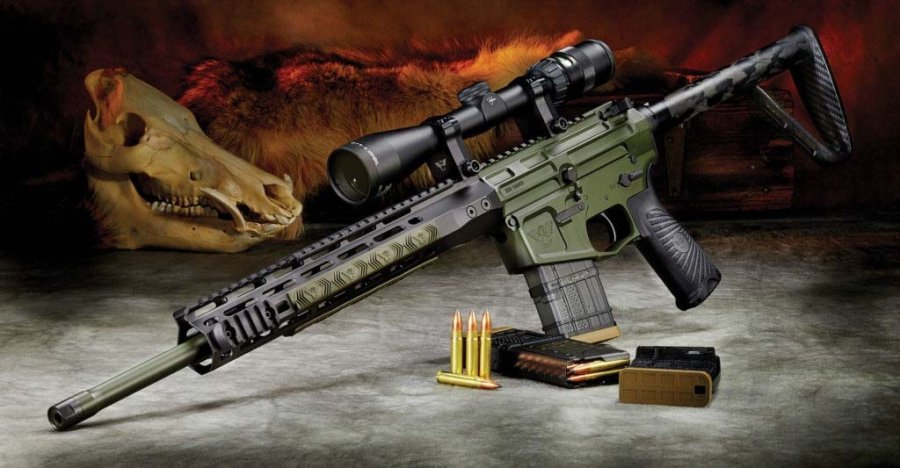 One of the first firearms available in 300 HAM'R was the limited edition "Ranch Rifle," a replica of Bill Wilson's personal rifle.

The main difference between the 300 Blackout and the 300 HAM'R lies in the case length, which in the new ammunition measures a full 1.603”, or 40.7 millimeters. So we have 0.235”/6 more mm of casing, for the same total cartridge length of 2.26”/57 mm. The goal Wilson wanted to reach with his 300 HAM'R was essentially to replicate the performance of the glorious .30-30 caliber, still used by American hunters in lever-action rifles, while maintaining all the advantages of compatibility with modern semi-automatic rifles offered by the 300 BLK. Ballistically, the 300 by HAM'R is superior to the 300 BLK: for example, the Hornady commercial loading with 150-grain SST bullet provides an initial velocity of 683 meters per second with an energy of 2275 joules. For further comparison, a .30-caliber cartridge fired in a 16-inch barrel propels the bullet on average to an exit velocity of 685 m/s for an energy of 2290 joules. So, Wilson's intention to replicate its performance can be said to have been successful. Recently, the cartridge obtained the official SAAMI acceptance. 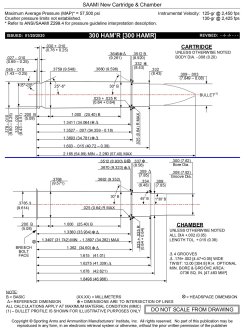 Alan Serven
The SAAMI data sheet for the 300 HAM'R cartridge.


The 300 caliber HAM'R cartridge is available in several different loadings marketed by Wilson Combat itself, all optimized for use in 18” barrel rifles, with bullet weights starting from 95 up to 150 grains. The world of home reloading has also moved quickly, and both Wilson and other specialized companies like Lee offer dies for this caliber. The choice of bullets already on the market is virtually unlimited.

Wilson Combat also manufactures some semi-automatic rifles in this caliber, among which the Tactical Hunter model stands out for its completeness – a semi-automatic rifle with a medium-stroke piston system, featuring an 18" suppressor ready fluted barrel, an optics rail (the rifle can be purchased already fitted with a Leupold VX-Freedom 3-9x40 Tri-MOA scope as standard) and all the accessories of the Wilson catalog. The Armour Tuff ceramic coating is available in a wide variety of colors and camouflages, including custom ones, for a price that in the US starts at $2,500 (about €2,200). In the Wilson Combat online catalog there are also models with a shorter barrel (11.3 inches) in self-defense and law enforcement configuration.

The 300 HAM'R is an interesting cartridge for hunting, sports and operational shooting. As always, we invite you to stay tuned to all4shooters's for latest news from the international market.

Subscribe to the Newsletter
This article is also available in this language:
IT
Click here for more information on the topics:
Ammunition
That might interest you too:

Extensive shooting tests prove that the precision of sport shooting with allegedly alternative types of bullets instead of lead deteriorates considerably. A safe hit would thus become a game of chance. International competitive sport would no longer be possible for European athletes after the impending EU ban on lead ammunition, with serious economic consequences!

The .45 ACP is well-known and popular among large-caliber shooters in almost all associations. At all4shooters.com Clemens Bolz, Alexander Schell and Robert Riegel have listed for you the advantages of the cartridge: what works, what doesn't and what the most important key points are when reloading.

UPDATE January 26, 2021: the Commission Regulation 2021/57, amending Annex XVII to REACH Regulation as regards lead in gunshot in or around wetlands was published in the Official Journal of the European Union. And with the rejection of the last motion in the EU Parliament against it on November 25, 2020, the ban of leadshot in or around wetlands is a reality. With all the "collateral damages" on …

A new EU regulation  restricting lead in hunting and sports shooting ammunition could be in place by 2023. If you go hunting or sports shooting and if you are currently using lead-containing ammunition, you will be directly impacted by the ban. The European Federation for Hunting and Conservation (FACE) is asking you to complete a short survey: Your input is critical to document the impact of a … 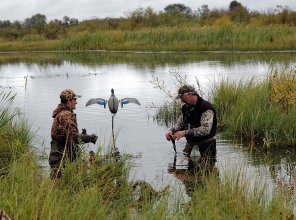 The fourth webinar of the cycle "A sectoral approach to the EU lead ban": Strategic webinar for hunters, sport shooters, collectors and industry" was held on Wednesday, November 18, 2020, on the AFEMS, FACE, IEACS, SAAMI (AFIS) platform, in collaboration with the WFSA. 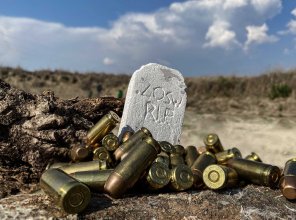 Introduced thirty years ago, the .40 Smith & Wesson was strongly supported by the FBI, in search of a cartridge that would guarantee immediate stopping power. At first received triumphantly by both the law enforcement and civilian sectors, over the years its nervous behaviour and operating costs have relegated it to a subordinate position compared to the 9x19 mm Parabellum, that has instead …