Command Arms Accessories
The Micro-RONI is available with a folding polymer stock for international sales, and with a right-folding stabilizing brace for the U.S. market

One of its latest and hottest new products, introduced in the first weeks of 2016, is a new generation carbine conversion chassis for semiautomatic pistols − a successor of the well-known RONI line of conversion kits for some of the most important pistol lines currently available on the market: Glock, Beretta, Springfield XD, CZ, Heckler & Koch, SIG Sauer, IWI Jericho, and many more.

The concept behind the RONI system is quite simple: it allows shooters to turn their handguns into a more stable platform for rapid fire and longer-range target engagements. The RONI was originally conceived to circumvent the restrictions that afflict both civilian shooters and private security operators in some Countries − such as Israel and many South American nations − where civilian ownership of long guns is banned or restricted. 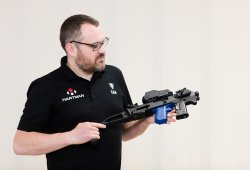 Oleg Volk
The Micro-RONI is made out of polymer and aluminum, and stands at barely 710 grams in weight − more or less like a fully loaded Glock 17

The Micro-RONI is also much lighter than its predecessor: with an overall weight of 710 grams (25oz.), it is just as heavy as a fully loaded Glock 17 pistol; put together with a Glock 17 or Glock 19 pistol and a full 33-rounds magazine, the Micro-RONI reaches 1,8 kilograms (about 3.9 pounds) in weight − less than half of a 16-inch barrel, 9mm-caliber AR-15 type semiautomatic carbine and exactly half of the weight of a first- or second-generation RONI kit. 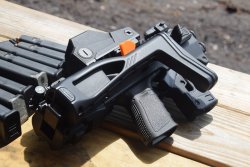 The Firearm Blog
Just like the earlier generations of the RONI system, the new Micro-RONI will be compatible with a plethora of popular semiautomatic pistols

The CAA Micro-RONI chassis is mostly manufactured out of reinforced polymer, with some aluminum components, and reprises the main working setup of the previous generations: it opens to the side to accommodate a handgun, and a polymer components engages the rear slide serrations allowing the use of an ambidextrous cocking handle. The Micro-RONI also comes available with an ambidextrous safety which, when engaged, flips two polymer shells up to prevent the shooter from reaching the trigger guard.

Other features of the CAA Micro-RONI include a full length top MIL-STD-1913 "Picatinny" rail for flip-up iron sights and optical devices; two shorter accessory side rails protected by polymer shells and featuring serrated thumb rests; a front seat for a tactical flashlight located right under the muzzle; and a hollow foregrip featuring a release button that dubs as a spare magazine storage.

Command Arms Accessories
Among the features of the Micro-RONI chassis are several Picatinny rails, a hollow seat for a spare magazine in the foregrip and a flashlight seat under the muzzle

Conceived for a wide array of popular semiautomatic pistols, the CAA Micro-RONI pistol-caliber kit will be available in black, khakhi and olive drab versions. It will also be available with either a right-folding polymer stock or a right-folding stabilizing brace, which makes it a non-NFA item in the United States.

Not only is the CAA Micro-RONI smaller, handier and lighter than the first two RONI generations: it is also cheaper. The release date has not been slated yet, but its retail price has been anticipated by some sources to be as low as $279.95 dollari − 242,70€ at current change − which is about half the price of a first- or second-generation RONI.

Command Arms Accessories
The Micro-RONI chassis is just one of the many new products that CAA will be launching worldwide in 2016!

Subscribe to the Newsletter
This article is also available in this language:
IT
Click here for more information on the topics:
CAA TacticalAccessoriesIPSC / Dynamic shooting sportOpen carryPersonal DefensePistolsPro-zoneSemiautomatic pistolsSport Shooting