FACE: Why EU must listen to Europe's 7 million hunters. International Conference in Brussels on Oct 26, 2022

The role of hunters to nature, society and economy was the main topic of the live streaming press conference held by the European Federation for Hunting and Conservation (FACE). Top representatives from major European hunting associations talked about biodiversity, conservation, EU rules and regulations. The message is: hunters are not the problem, but are an important part of the solution. Let's go into detail:

A contribution from Piergiorgio Molinari10/28/2022

Hear the hunters' voice and work with them to protect biodiversity and environment: this is the essence of the live-stream press conference held last Wednesday, 26 October 2022, by FACE, the European Federation for Hunting and Conservation. Under the title “Building a stronger Europe together – Why Brussels must work with Europe's 7 million hunters” the conference saw top representatives from major European hunting associations exchange experience and broad perspectives on the essential role of hunters to nature, society, economy and how best to promote an open dialogue with the EU institutions to successfully achieve policy targets together. The conference was also part of the signing campaign promoted by FACE to call on Europe’s main policymaking institutions to “work with hunters” for hunting and conservation. (The campaign already reached 200,000 signatures, including both on-line and physical ones. You can sign here to join the campaign.) 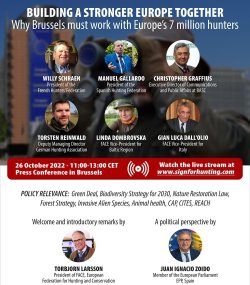 “80 % of the rules and regulations affecting hunting and conservation come from Brussels,” explained Torbjorn Larsson, president of FACE, in the introduction. The problem, he remarked, is the lack of flexibility and fair play on the part of EU institutions – so much so that the European Ombudsman recognised a case of maladministration by the European Food Safety Authority (EFSA) regarding its inability to provide key documents in a timely manner in the crucial issue of the ongoing restriction procedure on lead in ammunition – or “lead ban” for short.

Willy Schraen, president of the French Hunters' Federation, in this regard complained about the EU's “dogmatism without sufficient knowledge” and the exaggerated expansion of protected areas by removing men and women from territory. “A dangerous game by sacrificing rural world and endangering territories,” he said, since “hunters are the best asset for defending territory and biodiversity”. He also urged decision-makers to stop considering hunters as “stupids or barbarians” and to listen to “rural voices” instead.

The president of the Spanish Hunting Federation Manuel Gallardo, too, stressed the importance of countryside: “Hunting is essential for the development of our people and countryside-related activities and conservation”. As an example he cited the control of the overpopulation of rabbits during the pandemic. On the other hand, Gallardo noted how in protected areas biodiversity is actually in decline. “There is something wrong,” he adds.

Sustainability and political awareness: why hunting is important 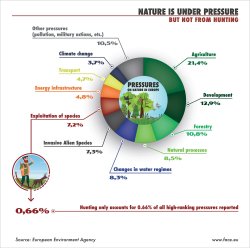 Hunters are not the problem, but are an important part of the solution.

“Nowadays we are living in a very interesting world: if you want to go and ask for a surgery, you ask for a doctor; if people want to go to space, they talk to scientists or astronauts; but when there are issues about hunting, everybody has an opinion and usually they don't ask the opinion of hunters,” pointed out Linda Dombrovska, FACE Vice-President for Baltic Region. “This campaign is a chance for us to show everyone that our opinion matter, that hunting is very important even in the 21st century. This our chance to say to society and institutions that their voices should be heard.”

Christopher Graffius, Executive Director of Commnication and Public Affairs at BASC (the British Association for Shooting and Conservation) talked about political awareness: “The business of politics and good administration is not to represent the people who shout loudest and complain most. It is about the representation and respect of the minority interests”. “That is my main message to you: seven million hunters in Europe are seven million votes, but they are more than that, because per every hunter, there are people who are working hunting, people who are helping hunting, people who benefit from hunting by eating the food that it produces, and they are voters too.”

Sustainability was the topic of the intervention of Gian Luca Dall'Olio, FACE Vice-President for Italy. “Hunters are stakeholders of biodiversity and conservation,” Dall'Olio said. “Hunting is the active management of environment and can't be separated from knowledge, competent people and skilled hunters” since “they play a very important role at social and economical level, especially in crisis times like these”.

From the interaction with the public, other specific issues arose, including the European firearms regulations, the interpretation of EU directives, and the management of species that are not endangered, in particular big carnivores such as bears and wolves.

Juan Ignacio Zoido, member of the Euopean Parliament EEP, Spain, brought the point of view from the inside of EU's institutions: “Public opinion don't understand hunting benefits, bur demagogy”. “The EU commission thinks that people living in the cities are more important than people living in rural and agricultural areas,” he stressed.

The campaign that FACE is carrying on is focused on this message: hunters are not the problem, but are an important part of the solution. The tricky part is make that clear to EU decision makers – and make them accept it.

Comment from all4hunters.com on the FACE conference in October 2022 and on the role of international hunting associations

If you look at the central topics of FACE from a distance, you could nod contentedly and say: yes, that fits. But if you look at the overall situation of hunting in Europe, some questions remain unanswered, which we would like to address here. This is not meant to be a criticism of FACE's work, but our commentary is intended to give a complete picture:

1. Economic factor of hunting
FACE says nothing about this – and yet it is enormously important. Guns, optics, ammunition, clothing, accessories, hunting schools, national and international hunting trips, hotels, catering, hunting ground facilities, leases, etc. play a major economic role. Basically and especially when it comes to impending bans such as lead in ammunition or further restrictions on hunting of any kind. This also includes the sustainable hunting of free-living wild animals (e.g. in foreign hunts) to finance the protection of species, which would not be economically possible at all in many regions without hunting.

2. Hunting must be more than just a "pure hobby"
We must absolutely distinguish between hunters and hunting license holders (motivated for whatever reason). In our opinion, the true practice of hunting in accordance with the principles of hunting and animal protection should rather be evaluated as an honorary office. Hunting is a contribution to society for the preservation of a healthy fauna and flora as rich in species as possible, as well as an obligation in terms of agriculture and forestry according to legal requirements. Hunting is therefore also active protection of animals and nature.

3. To strengthen hunting in the society and in its external perception there is still a big potential for improvement
The associations are obviously not particularly good at conveying these tasks of hunting to society as a whole and conveying the meaningfulness of the complex activities of hunters. For some years now, there has been an increasing number of hunting license holders, but only some of them join the associations. Why is that? Many of the hunting associations obviously do not really represent the interests of their members, but try to follow the political or social mainstream – for various reasons. Some functionaries who are also association presidents "on the side" stagger back and forth between two worlds and self-interests, which often does more harm than good to hunting. The representatives of the interests of the hunters often do not notice how much they bow down without a fight and increasingly surrender to the ideological constraints of our society and thus actually practice a betrayal of the interests of their own members. Unfortunately, so far there are no consequences for such behavior, although they are urgently needed.

Unfortunately, we have to lament a widespread decline in values in our society – this also applies to the role and understanding of hunting as far as nature and species protection are involved. The question is how values can be restored. The fact that a large part of the population now lives in urban areas, very far away from nature and wildlife, does not make this task any easier. But unfortunately the "political mainstream" is often influenced from there, without knowing the details and background. To intervene here would actually be the task of the hunting associations. Positive educational work would be urgently necessary - but what we experience more and more often are often encrusted structures in the hunting associations. There would be enough to do: an optimized and regularly refreshed hunting education and training, positive educational work about the role of hunting and hunters or overarching alliances to make a good and united lobbying. But often, unfortunately, the typical particularism and self-serving action can be observed. This is a pity, because this is not the core task of associations.

4. More financial support to the European and International umbrella organizations, such as FACE or CIC is needed
The goal is very clearly outlined: it is about achieving more impact also internationally through a unified approach by the hunting associations. In our view, this would also include, for example, proactively stimulating research projects and supporting them financially across all associations, as well as involving experts instead of cultivating their own "local profile neuroses". A united and coordinated European lobby could achieve much more. In this way, technically and factually competent contact persons could once again find a political hearing and face up to critical discussions and thus adequately represent the role of hunting, hunters, nature conservation and species protection, but also the interests of the industry. So that the sustainable use of natural resources and the preservation of values and traditions / customs as well as the openness for meaningful and necessary innovations are adequately ensured.

+++ To this end, the European Hunters Campaign of FACE is certainly a good international approach, but it would now have to be followed by responsible and targeted action by all national and international hunting associations +++
We deliberately leave the subjunctive here and hope that the members of the hunting associations will consistently demand what is really beneficial to the harmony of hunting and nature - i.e. a real representation of the interests of hunting and the hunting community. In this sense: "Good hunting!"

You can sign here to join the FACE campaign.

Subscribe to the Newsletter
This article is also available in this language:
DEIT
Click here for more information on the topics:
CultureHunting
That might interest you too: