all4hunters.com was invited on a driven hunt in France. We were allowed to accompany Kai-Uwe Kühl from K&K Premium Jagd, who wanted to answer the question: which gun is better suited for the exclusive driven hunt? We had the choice between a combination gun from Krieghoff – an Optima 20 double rifle drilling with 2 rifled barrels and a smoothbore barrel – and the straight-pull Merkel Helix Speedster rifle. 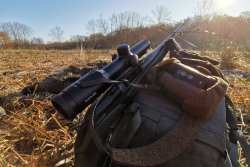 As for optics, a Kahles Helia 1-5x24i with a Dentler mount was mounted on the Merkel Helix. On the Krieghoff Optima 20, two optics were used. The new Leica Fortis 6 2-12x50i with rail and swivel mount, that in the lowest magnification offers a very large field of view at 100 m. And as an alternative for the short shooting ranges, on the Krieghoff double rifle drilling we used the Leica Tempus, with its adjustable red dot featuring 12 settings. This was clamp mounted.

Both systems were very effective on the hunt. There are two different types of guns, which are not really comparable with each other. It depends on the hunter's attitude: a double rifle drilling demands a different type of hunter, who wants to hunt with two rifled barrels and a smoothbore barrel. Sure, reloading takes time.

A 5-round straight-pull rifle conveys a different message. To have all the options available to be able to cover the longest possible range or to have several rounds available. If you really need a third round, the Helix has a clear advantage. The Helix and Kahles combo is also the winner in terms of price. The Kahles riflescope is hard to beat when it comes to the price-performance ratio for driven hunts. The image is super-sharp, even at the edges no wishes remain unfulfilled. The reticle is perfect and very clear. And here too, half a point goes to the Krieghoff-Leica combo, because with the Leica Tempus – which is mounted on the Krieghoff within 60 seconds using a clamp mounting – the boys and girls from Wetzlar offer a real driven hunt specialist for just under 500 euro.

Our driven hunt ammunition by RWS and Rottweil 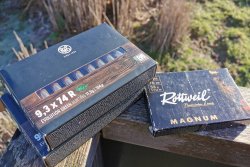 
In Krieghoff's double rifle drilling, the RWS Evolution Green in 9.3x74R (part fragmentation bullet) was used. When selecting the caliber, Kai-Uwe Kühl was advised in advance by specialists from RWS and the Hirschmann association with regard to the bullet effect. He is an avowed friend of deformation bullets such as the HIT. Based on our experience with some calibers in Romania, Kai-Uwe Kühl decided on a bullet with maximum effect for a wide range of applications. The long-term test of the Evolution Green in 9.3x74 R from RWS began with a driven hunt in Flechtingen in Saxony-Anhalt, where the double rifle drilling was used for the first time. In the meantime we have been able to test the effect on some hunts and the RWS cartridge also convinced us on this driven hunt in France. 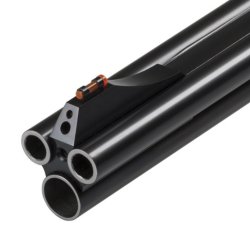 The RWS .300 Win. Speed Tip Pro 10.7 g was used in the Helix Speedster. On the second day, Kai-Uwe put down several sows, including an obviously sick sow, with the RWS Speed Tip fired from the Helix. The animals all dropped on the spot, the instant effect of the cartridge was impressive. The Merkel Helix Speedster is ideally suitable for driven hunts. The combination with the Kahles Helia 1-5x24i and the Dentler mount is effective all along the line. In addition, the straight-pull repeater offers the possibility to mount a suppressor. With its in-house suppressor, Merkel offers a real cream piece with high firing power. We will introduce the suppressor soon.

The Krieghoff Optima double rifle drilling is quite heavy, but it swings sensationally and offers the chance to shoot quick calf/adult doublets from the high seat, especially with the 20/76 barrel and the two rifled barrels, and is also gentle on foxes and game birds. If you don't want to miss style and elegance on the hunt and are looking for an investment for the future, you are on the right side with the Krieghoff double rifle drilling.

What was the old saying about the drilling that is still valid today? That's right, drillings replace a closet full of guns. When it comes to versatility, the drilling can't be beaten. So this point goes –  albeit by a small margin – to the guys from Ulm.

Our conclusion on the driven hunt Krieghoff and Merkel guns

Choosing a winner at this point wouldn't do justice to the two combinations for use in driven hunts. The duel of the driven hunt gun combinations ends at this point with a fair draw. What both systems have in common is the weight. Both combinations are only partially suitable for the mountains. The weight would certainly be too heavy for hunters in the Alps or even the Carpathians.

As we could see and hear at the Jagd und Hund 2020 fair in Dortmund, active hunting (stalking, mountain hunting) is increasingly becoming the focus of hunters, which is why it's not surprising that the major manufacturers are bringing single shot rifles into the public eye.

As Andreas Maurer of Merkel said at the presentation of the new K5 in Dortmund: "Single shot rifle – nobody needs it, but everybody wants one.”

Which means, on a moving and active hunt with great new guns, especially adapted to the hunters' needs.

For further information on the Optima 20 please visit the Krieghoff website.

You can find out more about the Helix Speedster on the Merkel website.

On the Leica website you can get more information about the Fortis 6 2-12x50i and the Tempus.

Further information on Evo Green, Speed Tip Pro and Rottweil ammunition can be found on the RWS and Rottweil website.

Subscribe to the Newsletter
This article is also available in this language:
DEIT
Click here for more information on the topics:
CultureKrieghoffMerkelHunting RiflesBolt-action rifles
That might interest you too: