Protecting your ears while shooting is important. Despite the ever-increasing use of suppressors, hearing protection should be worn both on the range and when shooting in the field. One of the most established offerings of high-quality hearing protection for hunters and sport shooters is the Supreme series from Swedish manufacturer Sordin. all4hunters.com tried out two models at both ends of the price scale.

Whether on the shooting range or the hunting ground, hearing protection should sit on the ears. Damage to hearing is regularly irreversible. Accordingly, it is not recommended to choose the first earmuffs from the hardware store. This is because not only are the attenuation values often completely unsuitable for the impulse peaks during shooting, but the advantages regarding communication of modern, active earmuffs are also missing. One of the leading manufacturers of high-tech hearing protection is the Swedish company Sordin. Especially Sordin's Supreme series  models are particularly widespread in shooting and hunting circles and enjoy a good reputation. We took a closer look at two models of the classic line.

The common features of the Sordin Supreme series hearing protections

For our test, we chose two different variants of the Sordin Supreme in two price ranges. Firstly, we opted for the basic model "Supreme Basic". It comes at an MSRP of 162 euros. At the other end of the price range then comes the "Supreme Pro X" with LED. At 299 euros, it's almost twice as expensive, but it also have a lot more useful features. But first, let's look at what the Supreme series has in common. 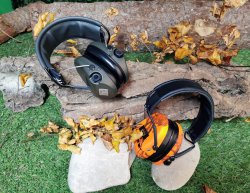 Hehmann, Sven
Same design: both variants of the Sordin Supreme hardly differ in their design. On the right, the Supreme Pro model. On the left, the Supreme Basic model.

All hearing protections share the same design. Cups are shaped to fit both right hand and left-hand shooters. Sordin has designed their shape to be relatively flat and not very bulky, which is of course a great advantage when shouldering a rifle. The microphones for the active component of the protection are located on the front of both cups. On the back of the right cup is a screw cap, below which the batteries (two AAAs) find their place. On the side of the left cup, on the other hand, is the control panel for the electronics, consisting of three rubber-covered buttons.

Sordin has connected the cups themselves to the headband using a wire-like metal part. The headband itself is always made of plastic, but the Basic model is covered with imitation leather while the Pro X with leather. The cable needed to connect the two cups also runs over this headband, and the leather (imitation) cover fixes it securely with an extra sewing. It never got in our way during the test.

The attenuation performance of the devices declared by the manufacturer is also identical. The differences between the models thus mainly concern "nice to have" features, so the user does not make any concessions in terms of hearing safety, regardless of the model. The attenuation is 25 dB (SNR). The integrated microphones of the devices automatically attenuate at a volume of 82 dB.

The price difference between the versions has to be reflected somewhere, of course. In this case, that mainly concerns the inner values. One of the most important differences is that the Basic model does not have amplification. Although the shooter can adjust the volume in five stages, at no time are they louder than the real noise. The Supreme Pro X, on the other hand, has six levels where amplification also takes place. Quiet noises therefore reach the wearer significantly louder than they really are in reality. The second important difference is the weather protection: the Premium device comes with IP67 protection for the battery compartment and microphones, while the Basic does not have the corresponding certification. 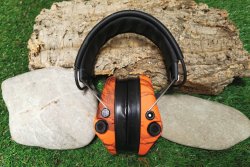 Furthermore, the Supreme Pro X LED has a few more features built in: it also comes with a 3.5 mm jack socket on the back of the left cup. A radio, smartphone or similar can be connected here, for example. On the front there is also the eponymous LED. It is particularly suitable for working at close range and keeps the hands free. The premium Supreme model (like our test model) is available with blaze orange, green or camo cups, while the Basic only comes in green. The cushions and sealing rings also differ: While the Basic is equipped with foam cushions, the Pro model has gel cushions. They are much more comfortable, especially when used for longer periods of time or when wearing glasses. Therefore, a tip at this point: both the foam and gel cushions are available as hygiene kits for replacement (Sordin recommends doing this twice a year). Buyers of the Basic model should directly include the investment of 44 euros for the gel pads – it's worth it!

We have used both models for some time on the shooting range and in the field. First, the operation: the three-button concept was catchy and could convince us. Pressing the middle button activates the electronics, and the device becomes "permeable". The volume can then be adjusted downwards with the front button (from the perspective of the worn device) and upwards with the rear button. A longer press on the center button turns the Supreme off again. The audible sound quality is good. The amplification provides a much better hearing of quiet sounds. For example, the breaking of a thin branch is clearly audible, but would probably have been lost without amplification. Of course, the reproduction does not completely correspond to the real sound and a basic noise is also perceptible in higher amplification levels. However, this did not bother us in the test. The only problem was the direct influence of strong wind on the microphones, which the user should avoid. A strong noise is otherwise the result. However, there is probably no technically feasible alternative to this. In the Pro X LED version, the user activates the light by pressing both buttons on the side, and also deactivates it again. Otherwise, the LED turns itself off after three minutes.

On the other hand, some patience was needed to change the battery in the case of the top model. Due to the use of two batteries, but through an opening that only has room for one battery at a time, it turns out to be rather fiddly. One of the batteries is "sunk" into the compartment, and there is no way to get to it through the opening. Accordingly, you have to shake and turn the whole cup a bit to get this energy source out of the Supreme. The insertion itself, however, was very easy (see also the video below). The low overall height in combination with the water resistance justifies this solution, especially since the battery life of the Sordin Pro X is stated to be around 600 hours of continuous use. We did not check this in detail, but it should roughly correspond to reality. Accordingly, the somewhat cumbersome battery change only has to take place very rarely. Everything is a bit easier with the Sordin Basic: here, the battery compartment is located underneath the right ear cup. It is simply removed and the batteries can be easily removed and inserted.

Video: how to replace the batteries in the Sordin Supreme Pro (-X)

The wearing comfort of both devices was impressive. Neither hearing protection caused any pressure on the contact surface of the headband – unfortunately, we have already noticed that with other devices. On the other hand, there was a difference at the ears: when worn continuously for about 1.5 to two hours, the Basic model started to press on the ears, while the Pro X with its gel cushions still sat comfortably. We have already indicated this finding above. And we advise here the mentioned remedy once again.

Conclusion: which Sordin Supreme model for which application?

Both Sordin Supreme earmuffs impressed us in the practical test. The quality is fine, the wearing comfort is good and the hearing protection is safe and comfortable. When it comes to the question of which device the user should buy, it is important to look at one's own needs. As a rule of thumb, sport shooters should be well advised with the Supreme Basic (adding the gel upgrade). They usually needs neither amplification, nor weather resistance, nor a light. Hunters, on the other hand, are probably better served by investing in the Supreme Pro X LED. In many situations, the additional features can help there just very well.