A contribution from Pierangelo Tendas07/10/2012

The final stages of the now-infamous shootings in Toulouse and Montauban (France) last March, when the terrorist Mohamed Merah killed three off-duty soldiers and several children of a Jewish school before being gunned down after a days-long Police siege in his own home, brought our attention to the tactics and equipments used by the GIPN elite squad of the “Police Nationale”. It was especially interesting to discover that the combat shotgun used by the French SWAT was not a western design, but a Russian-made autoloader, the very same model employed by the Armed Forces of the Russian Federation and by the special troops of the MVD, the Russian Ministry of Interior; weʼre talking about the KS-K (“Karabin Spetsialniy Kalašnikov”, literally “Kalashnikov-type Special Carbine”), the special tactical/combat variant of the Saiga-12 shotguns series manufactured in Russia by the IZHMASH mechanical plant and offered for export worldwide. The KS-K is, more specifically, offered in the exact same configuration as adopted in Russia and France in many European market, including the Italian one, with the denomination of “Saiga-12 Exp.01 Version 030”; in the United States, this very same gun is equipped with a Dragunov-style polymer, fixed, thumbhole stock. Aside from Military/Law Enforcement uses, the KS-K shotgun appears to be pretty apt for civilian home and property defense, private security duties, and as a 3-Gun competition weapon. It feeds through polymer detachable magazines that may hold four to eight 12-gauge, 3-inch (76mm/“Magnum”) shells depending from the version, and in the hands of an expert user it might reach the astounding rate of fire (for a semi-automatic shotgun) of 40 rounds/minute.

The KS-K shotgun is based on the Kalashnikov working system; it in fact uses the very same gas-operated long-stroke piston of the AK-47/AKM assault rifle, featuring unparalleled reliability regardless of the type of ammunition used or the environmental conditions. The frame of the KS-K shotgun is entirely made out of machined stainless steel; high-quality carbon steel is instead used to manufacture the massive barrel of the KSK, which comes equipped with a Birdcage-type flash hider. All the furniture (pistol grip, handguard, stock) is instead made out of synthetic materials, and in the style of the AK-100 assault rifles series. The stock folds to the left side of the receiver, and features a rubber shock/recoil-absorbing buttpad. The total length of the KS-K can thus range between 72.5 cm. with stock folded to 97 cm. with stock unfolded. The total weight reaches 3.8 Kilograms. 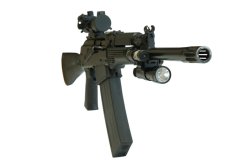 Izhmash OJSC
The KS-K shotgun has been adopted by the Special Forces of the Russian Ministry of Interior (MVD) and, oddly enough, by élite groups of the French Police

The controls of the KS-K reproduce the exact same configuration of the commands on the AKM-derivative assault rifles; similarly, the KS-K features an AK-style rear leaf sight and front post sight, yet features a long top MIL-STD-1913 “Picatinny” rail for optics and a shorter one under the barrel for tactical accessories; replacing the handguard halves with aftermarket elements equipped with additional Picatinny rails − available either through by the IZHMASH company itself or through third parties − will further increase the versatility of this extremely effective CQB/breaching platform. Much like any other AK-based firearm, the KS-K is extremely simple to strip down for cleaning and maintenance. 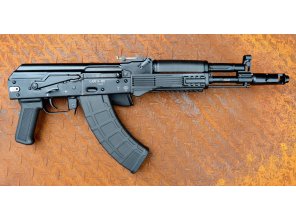 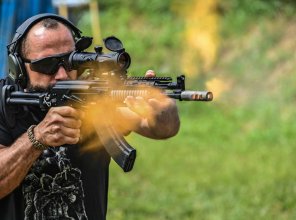 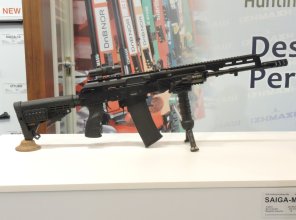