Featuring a lighter handguard with attachment screws for additional rigidity and a lightened profile barrel, the latest MCX-SPEAR-LT is now also available in 7.62x39 caliber. The fully ambidextrous controls are the same as the M400 rifles. Barrels are interchangeable, and you can also use AR-15 triggers.

A contribution from Piergiorgio Molinari09/20/2022 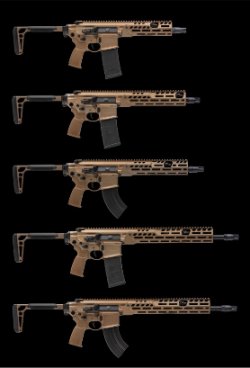 “The first generation of the MCX platform was designed to be an AR-15 style platform with added modularity. The second generation of the MCX, the MCX Virtus, was purpose-built for rugged durability and brought unprecedented modularity. Now comes the MCX-SPEAR-LT, which incorporates the best of both generations and is the culmination of the latest research, development, and innovation in the MCX platform,” explains Tom Taylor, Chief Marketing Officer and Executive Vice President, Commercial Sales, SIG Sauer, Inc.

The MCX series was designed from the start to be the “most adaptive, accurate and longest-lasting rifle available”, But what's new with the MCX-SPEAR-LT?

First, a lighter handguard with attachment screws for additional rigidity and a lightened profile barrel with improved accuracy.

Secondly, the MCX-SPEAR-LT adds the 7.62x39 caliber to the MCX family, that already offers 300BLK and 5.56 NATO chamberings: “Developed with a new latch system the 7.62x39 MCX-SPEAR LT was developed to handle the many varieties of 7.62 caliber ammunition while still maintaining reliability and smooth shooting,” they say at SIG.

SIG MCX-SPEAR-LT, all the virtues of the VIRTUS

The 9” pistol version of the SIG MCX-SPEAR-LT in 300 BLK is quite compact.

Among the other features – also familiar from the previous MCX VIRTUS – the fully ambidextrous controls, including the bolt catch and release on the SDI M400-style lower with coyote anodized finish. 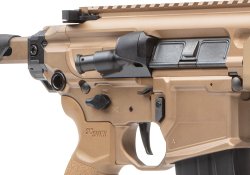 The SIG SDI M400-style fully ambidextrous controls include the bolt catch and release. The lower has a coyote anodized finish.

The MCX-SPEAR-LT rifles feature a lightened handguard with attachment screws for additional rigidity and a lightened profile barrel with improved accuracy.

The SIG Flatblade Match Trigger guarantees comfort and a crisp release – the MCX-SPEAR-LT will accept AR-15 style triggers too. The push-button folding stock (like the one seen in the CROSS bolt-action rifle) with cheek-rest allows for maximum compactness. The rifle is optics ready

To learn more and for full specs please visit the SIG Sauer website.

Subscribe to the Newsletter
This article is also available in this language:
IT
Click here for more information on the topics:
SIG SauerRiflesSemiautomatic rifles5,56 mm NATO7,62x39 mm Russian
That might interest you too: