IWA 2016 / New from Lithgow Arms: the F90-LE is a law enforcement version of the F90 assault rifle 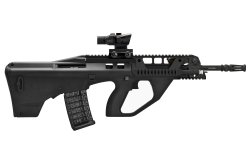 Geoff Howden
The Lithgow Arms F90-LE is a semiautomatic variant of the F90 assault rifle, recently adopted in service by the Australian military as the EF-88 “AuSteyr”

A former State-owned Australian arsenal, Lithgow Arms is currently the small arms division of the multinational THALES Group, and the mainstay of its product line is the F90 bull-pup assault rifle – a highly evolved version of the Steyr AUG platform, adopted as the EF-88 by the Australian military and submitted to several military adoption trials all around the world.

New from the company at the 2016 edition of IWA is the Lithgow Arms F90-LE – a semi-automatic version of the F90, conceived as a Police patrol rifle. The F90-LE has been qualified to NATO and UK MoD military test standards, and is available in three intechangeable standard barrel lengths. Chambered fror the NATO standard 5,56x45mm caliber and feeding through Steyr AUG magazines, the Lithgow Arms F90-LE uses MIL-STD-1913 “Picatinny” Picatinny accessory rails to accommodate a wide range of customer preferred accessories and target-acquisition systems. Prospective availability on commercial/civilian markets is unknown at this time.

Subscribe to the Newsletter
This article is also available in this language:
IT
Click here for more information on the topics:
Rifles.223 RemingtonIWASemiautomatic rifles