Barrett M95 bolt-action bullpup rifle in .50 BMG: with the Big Fifty on the shooting range

From the US company Barrett, this .50 caliber rifle was developed for the military and today is a classic of its kind. all4shooters.com examined the rifle and its extraordinary action in  .50 BMG and tested it in a long underground shooting range. 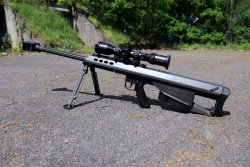 They are legendary: the semi-automatic rifles produced by Barrett Firearms Manufacturing , namely those chambered for the monster .50 Browning Machine Gun (BMG) cartridge, aka 12.7x99 mm NATO. But not everyone can get his/her hands on them: semi-automatic guns like the Model 82 are usually banned from the civilian market, being considered weapons of war. Nevertheless, there is a Barrett .50 that  can also be legally sold to civilians in some countries. We are talking about the M95, a bolt-action rifle introduced in 1995. It has long since conquered its place among US long-range fans – despite or because of its unusual design, namely a bullpup design. If you think of a rather dainty bullpup rifle like the Steyr AUG you are wrong. Although the rifle with the 5-round box magazine measured only 45.27” / 1150 mm, it weighed in at 24.7 lb / 11,235 g – the mass needed to counteract the energy of the .50 cartridges has to come from somewhere. In the test we show how the Barrett M95 performed.

Stock and receiver of the Barrett M95 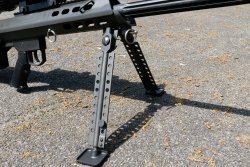 Apart from barrel and bolt, the M95 consists of solid stamped sheet metal parts, which can be stripped into two assemblies by removing two lock pins. The lower receiver consists of a pistol grip with trigger unit, magazine well and lower stock. Also included is the underside of the front handguard with folding bipod. The latter is tipically Barrett-style: two 0.37” / 9.5 mm thick retractable legs with perforated plates. Simple, functional, stable. The perforated plate contains the locking device, that allows for height-adjustment in 4 steps. The bottom of the fore-end is also locked via a pin with a key ring. By the way, they all look like hand grenade safety pins. The pistol grip is made of hard plastic. It's an AR-style design. As usual for bullpup rifles, the magazine well is located behind the pistol grip. The steel Barrett box magazine holds five .50 BMG rounds (maximum length: 5.5” / 140 mm) in 2 rows. The stock with its rigid buttplate cannot be adjusted anatomically. 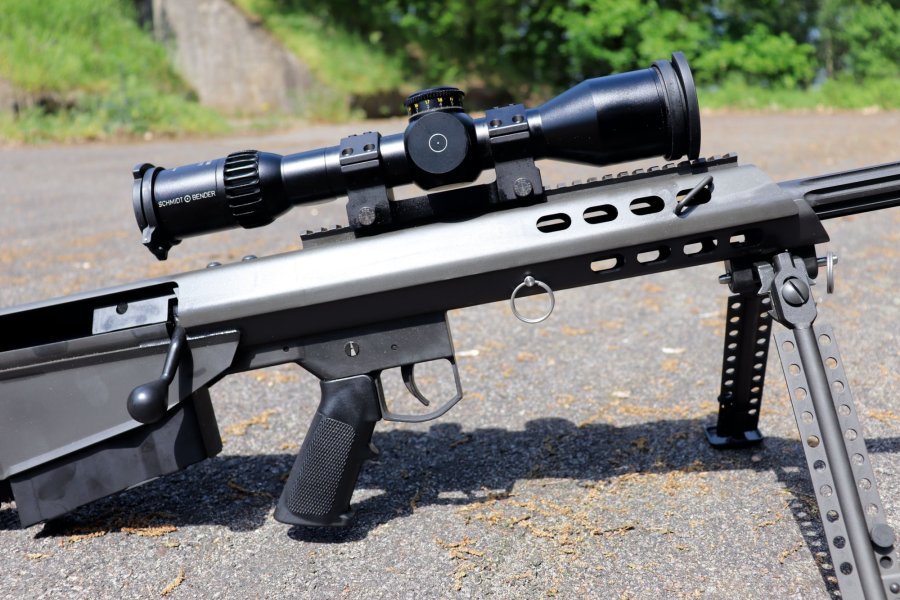 Daniel Lang
Magazine well and bolt handle are behind the pistol grip.

1” to 1.37” (25 to 35 mm) thick rubber pads on the buttplate make recoil more bearable. A monopod can be attached to the bottom of the rear stock. However, this is not included, for whatever reason. According to testers, users could adapt a piece of round iron bar with a base plate and a fixing screw to the Barret. The upper receiver, which is attached to the barrel, actually only provides a lid for the lower receiver. Like the lower receiver, it also has 4 ventilation slots on both sides. Directly behind it, a kind of recoil lug is welded on. It supports the barrel and transfers the recoil force to the lower part of the receiver and thus to the buttplate. On the receiver cover there is a 11.75” / 298.5 mm long Picatinny rail with 27 MOA front inclination. Looking towards the muzzle, there is a fixed sling swivel on the front right and one on the rear left. 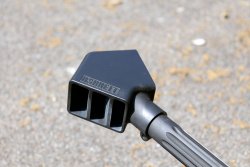 Daniel Lang
The impressive three-chamber muzzle brake of the M95 with the Barrett company logo.

Almost cylindrical, the barrel tapers only by 0.007” towards the muzzle, from 1.13” / 28.9 to 1.123” / 28.7 mm. The barrel root and the chamber area it is much thicker, at 1.53” / 39 mm. The bolt locks into the barrel extension. Like many other manufacturers, Barrett uses a ring in the barrel root to set the correct headpace. This makes it possible to adjust the headpace afterwards (useful for a gun from the USA, where there are no CIP strict regulations - in countries with such regulations, such adjustments are a task for specialists). The barrel is fluted on the front half. Nine grooves provide more surface area and therefore better heat dissipation . Mounted on the muzzle, the three-chamber muzzle brake stands enthroned with its bulky, angled shape typical for Barrett. The curved baffles deflect the combustion gases to the rear and to the side at different angles. To anticipate the shooting test: the brake works so effectively that the testers were reminded of the recoil behavior of a .338 Lapua Magnum.

Bolt and trigger of the .50 BMG rifle 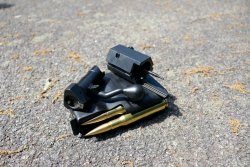 Daniel Lang
The bolt assembly stripped. The bolt can be removed by turning a lever.

The bolt carrier with bolt head measures almost 4.3” / 11 cm. To remove it: safety check, separate upper and lower receivers. Pull the trigger and slide the bolt carrier forward and lift it off the rails. The bolt head itself uses 3 lugs to lock into the barrel extension. The 3 lugs are so large that they merge into each other, so the bolt head looks triangular. The extractor claw and ejector pin ensure safe case ejection. The bolt can be easily removed for cleaning by turning a lever. The M95 is spartan with the trigger – no, you can't adjust anything. Since it’s a proprietary assembly, the accessories market offers hardly any alternatives. The average pull weight of the test gun was 82.89 oz / 2350 g: completely ok. But you have to get used to the very long trigger slack. The 2-position safety acts directly on the trigger; it can only be operated from the left.

Daniel Lang
The muzzle flash of the Barrett M95 photographed in the underground range during the test.

Couplet to the short M95, a Schmidt & Bender PM II Ultra Short 3-20x50 riflescope, here with TReMoR3 reticle in the 1st image plane. This reticle, designed for police and military use, takes getting used to due to its many aiming points, but is ideally suited for long range. The picture quality is hard to beat. Even with poor visibility and 20x magnification, the image in the eyepiece remains surprisingly bright. The parallax can be perfectly adjusted. In general, the haptics of this optic must be described as brilliant. Despite the large magnification range, the image doesn't tunnel at low magnifications, as the original PM II does. In this way, the scope made a lasting impression. With an RRP of 3920 euro, however, it's an high-end product. Anyone who can afford it and wants it will never be disappointed . 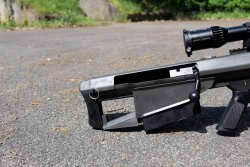 Daniel Lang
The buttstock with shoulder pad, magazine and bolt behind the grip.

With the bullpup repeater on the shooting range

The Barret was first tested in the Ore Mountains, Germany – at the Schützenverein Mittleres Erzgebirge e.V. , where laboratory-like tests can be carried out in the underground shooting range. After only a few test shots, the examiners were able to cope with the trigger and the like, so that the test was preceded only by intensive cleaning, as always with a bronze brush, solvent and patches. For measuring bullet velocity, a LabRadar device was available in addition to the electronic hit indicator by Silver Mountain Targets (SMT). But unfortunately not for long. The muzzle brake directed the combustion gases so effectively backwards that not only the hair of the testers looked as if blown away by the wind, but also the LabRadar measuring device made a backward roll. Thank goodness there was only damage to the body, the electronics were still working. The recoil was no problem thanks to the brake and buttstock padding.

The impacts of the 4 test loads were close together. At 100 and 300 m the 600-grain SAX bullets in combination with the Swiss RS80 powder were the best. Johannsen's 700-gr bullets hit slightly better at 500 m. All in all, the accuracy of the M95 with a relatively short barrel for a .50 BMG gun is more than okay. Especially since the Barrett is only supposed to unfold its true effect at long ranges. It was already able to demonstrate this on the following day on a 1000 m open air shooting range. The shooting gods were benevolent there. No rain, no sun, 20°C and cloudy. So we quickly installed the SMT hit indicator, and off we went. The click values for 1000 m were calculated and set in the optic by entering the ballistic data obtained the day before through the external Strelok ballistic app. Cartridge load one into the magazine, bolt closed, fire and... hit! Already the first shot was directly in the electronic hit area. In this way, all cartridges could be shot through quickly. Only the 600-grain SAX bullets loaded by hand didn't want to harmonize with the electronics. Soon it became clear why: because of a slightly weak charge, the bullet flew sub-sonically at 1000 m. So the hit indicator didn't worked. In a tried and tested manner, a target was therefore set up and shot again. In the end, the SAX cartridge with a 745-grain brass bullet dominated at 1000 m.

Bottom line – Test results for the Barrett M95 in .50 BMG


If you like legends, you must have them. If you like handy gun in .50 BMG, you should have it as well. After all, it's still a bolt action gun with a magazine. Sure, you have to get used to a bullpup, but that's not as bad as you might think. Accuracy is ok, especially since this test is certainly not exhaustive: with a little tinkering and some loading tests you should get better results. Is something missing? Well, Barrett should include a monopod. About the price, for almost 8500 euro you can get an offshoot of the famous sniper rifles. Granted, a lot of money – but a lot of fun for everyone who likes to shoot very far with very big guns.


Subscribe to the Newsletter
This article is also available in this language:
DE
Click here for more information on the topics:
Barrett FirearmsRiflesBolt-action riflesTestBullpup
That might interest you too: 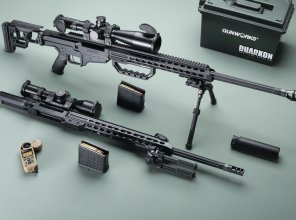 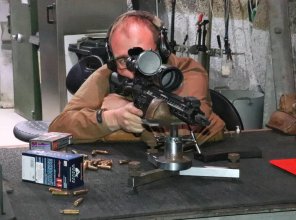 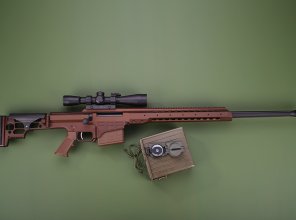 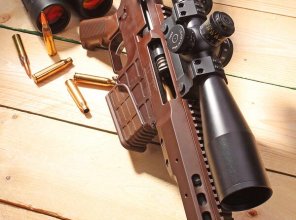