What does fill the gap between an assault rifle and a heavy machine gun? A light machine gun. Russia decided to purchase a new model, directly from the Izhevsk-based Kalashnikov Concern. all4shooters.com explains in detail what the RPK-16 light machine gun is all about.

Archiv
The RPK-16 won the tender process over other designs. It's based on the Russian AK-12 assault rifle.

When it comes to light machine guns, it must always be taken into account what they are used for. In the case of Russia and the Soviet Union, the roots lie in the offensive. From 1944 onwards, the Red Army mainly carried out offensive military operations. For this purpose, the infantry needed a lightweight and agile machine gun. The proven Degtjarew DP-27 was not designed for this purpose and was not modern enough. So a light machine gun was to be designed for the recently introduced M43 (7.62x39) cartridge. This ammunition had sufficient stopping power and accuracy at ranges of up to 800 m. The winner was the Degtyaryov RD-44. After the production of a small test series and troop trials, this weapon was introduced under the name of "Degtyaryov Light Machine Gun System” (RPD) as the main means of providing fire support for the Soviet infantry forces. At the beginning of the 1960s, the leading Kalashnikov LMG (RPK), together with the AKM, replaced the RPD. Nevertheless, the RPD remained with the reserve units. On the other hand, the "RPK" system remained with the Red Army (and the military of other countries) for much longer, and these weapons still dominate police forces.

The innovations of the light machine gun

Archiv
Top view of the new RPK-16 LMG, a long development that started in the 2010s.

Operational experiences, especially in the fight against terror by the army and police, showed however that something new was needed. The best choice was an "assault machine gun", suitable for close range, street and house fighting to provide fire support to shock troops or for direct engagement of snipers. Low weight, compact dimensions, high rate of fire and a correspondingly powerful ammunition – these were the requirements. At the beginning of the 2010s, the Russian Ministry of the Interior compiled a specification for such an assault machine gun – the 5.45 mm caliber had finally been agreed upon. Since the Russian Ministry of Defence also intended to develop a new squad automatic weapon to replace the RPK-74 as part of the Ratnik program, it was decided to combine the two projects and develop a weapon with 2 interchangeable barrels: the machine gun for the army would have a barrel of standard length, the assault machine gun for the police a short barrel.

In May 2011 the FKU NPO "StiS" research division of the Russian Ministry of the Interior announced the tender for the "Development of an assault LMG with variable rate of fire" under the code "Tokar". According to the requirements, the new machine gun should have an overall length of 35.4”/900 mm with the long barrel and 27.5”/700 mm with the short barrel at a weight of 14.33 lb/6.5 kg. Ammunition was to be fed from the newly developed 60- and 90-round magazines as well as from standard magazines. In order to adapt to various operational scenarios, a variable firing rate was planned: a low 550-650 rounds/min rate and a high 900-1000 rounds/min rate. Only one company took part in this tender – the Degtyaryov plant from Kovrov (OAO "ZiD"), whose machine gun trial sample was presented in 2013. But without success.

In 2016, "Tokar-2" came with the corresponding tender. The biggest difference was the feeding system: either from a 60-round magazine or a 100- or 250-round belt box. Degtyaryov took part again, but an unexpected competitor, the Kalashnikov Concern, now also expressed interest. The "Molot" factory also seemed to be interested, but its MG has not yet seen the light of day. In any case, the winner was soon determined and the RPK-16 (the number indicates the year 2016, when the developments began) was issued to the troops for operational testing in February 2019 after preliminary trials. Among others, it was issued to the Moscow Higher Military Command School and Russian special forces.

Design and operation of the RPK-16 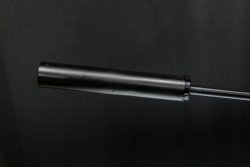 Konstantin Lazarev
The new light machine gun from Kalashnikov is also suitable for suppressors. And it offers even more.

In contrast to the assault rifle and the light machine gun of the previous generations (RPK and RPK-74), the barrel of the RPK-16 is not only thicker, but also interchangeable. The barrel is inserted into the housing by operating a side moving catch. However, the barrel is not changed to cool it, but to adapt the weapon to different mission scenarios. There are 2 barrels for this purpose: one 14.5”/370 mm long and one 21.6”/550 mm long. With the short barrel, the RPK-16 can be used in street and house fighting, for example. And with the longer barrel for fighting on open ground or in the desert. In addition, there is a practical benefit: a worn out or defective barrel can be replaced directly by the soldier without having to send the weapon back to the workshop or the manufacturer. The RPK-16 has a slotted muzzle flash hider instead of a muzzle brake. By means of a quick release system it can be replaced by a suppressor during special operations. The receiver is more rugged and a bit more massive. Compared to the "classic" Kalashnikov rifle, both AK-12 and RPK-16 featuring a redesigned top (dust) cover, which is 0.059”/1.5 mm thick (instead of 0.039”/1 mm). The dust cover has a new holder and can be opened upwards. 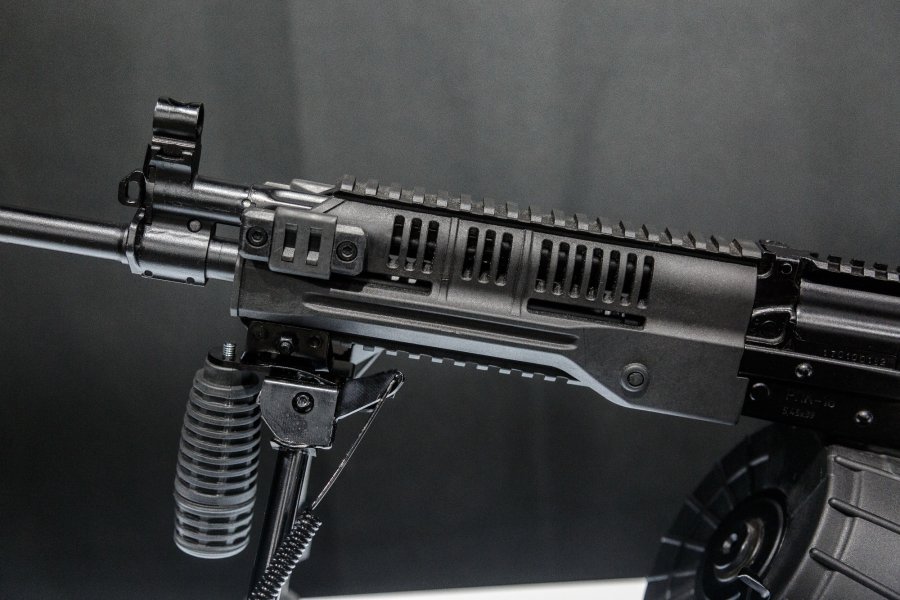 Konstantin Lazarev
One thing is for sure: various accessories can be attached to the RPK-16, such as bipods or optics. 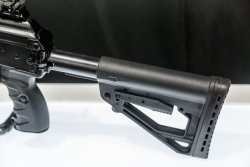 Konstantin Lazarev
No more rigid wooden stock, but a modern telescopic stock, which can also be folded when needed.

It seems remarkable, however, that the developers of the RPK-16 have dispensed with the conventional rear stock optimized for prone shooting using the bipod as with the RPD model. For the AK-12 and RPK-16, the Russian designers have chosen a telescopic polymer stock that is hinged on the left side of the receiver and can be length-adjusted in 4 positions. It is part of the KM-AK (6Tsch63) Kalashnikov upgrade kit and was developed within the "Obwes" R&D project on behalf of the Russian Ministry of Defence. Designed in the style of the AR-15/M16 stock, it significantly improves the weapon ergonomics. Contrary to the widespread opinion that this war weapon does not need an adjustable stock, this feature is an advantage with the RPK- 16, because the shooter can adjust the stock length to a variety of shooting situations (dressed in a light summer uniform, wearing body armor or a thick winter coat – the latter for the Russian winter). Since there is no more room for the cleaning kit in the stock, it is accommodated in the hollow, ergonomically shaped pistol grip with finger grooves. The RPK-16 also has a long MIL-STD 1913 Picatinny rail at the 12 o'clock position on the polymer handguard, which allows for the mounting of various accessories.

Optics and magazine options for the RPK-16: a versatile light machine gun

Konstantin Lazarev
Although the RPK-16 is intended for the use of optics, it has a tangent sight.

In addition, the RPK-16 features an integrated hooded front sight, the base of which has been moved to the gas block. A tangent sight is coupled to that. The 1P86-1 riflescope serves as the standard optical system. Its magnification can be adjusted step by step from 1 to 4 and can be used as a reflex sight or as a sniper's scope. In addition, the RPK-16 can also take on the role of a "Designated Marksman Rifle" at ranges of up to 500 m. There are two removable side rails plus one under the handguard, where further accessories such as a bipod can be attached. The RPK-16 can be equipped with the usual standard 30- and 45-round box magazines. In addition, a 95-round drum magazine, specially developed for the new gun, can also be used. The drum magazine of the RPK-16 can also be used with the AK-12. By eliminating belt feeding, the RPK-16 is more reliable, easier, simpler and faster to reload. 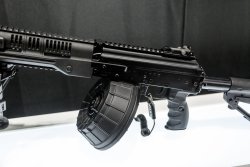 Konstantin Lazarev
Specially designed: for the RPK-16 the designers created a 95-round drum magazine which can also be used with the AK-12.

When developing their counterpart to the FN Minimi (M249), the engineers of the Kalashnikov Concern did not use a belt ammunition feed system. This means maximum standardization with the new Russian AK-12 standard assault rifle. Actually, the RPK-16 is an AK-12 assault rifle suitable for more sustained fire. There are two reasons for this. Firstly, Russian military personnel attach great importance to firearms standardization, so that different types of weapons have the same design and mode of operation, differing only in individual parts. This simplifies production, maintenance, repair and training for handling weapons. And secondly, a wide range of accessories has been developed for Kalashnikov Concern's products, such as various target optics, magazines, gun cases, gun racks, weapon supports for armored vehicles and helicopters, and much more. Once a new weapon model has been put into service, this "infrastructure" does not have to be renewed if it is based on the same design. The question remains open, however, whether the RPK-16 variant in 7.62x39 mm caliber could have good export potential. It remains to be seen how the worldwide political situation will develop. And finally an interesting anecdote. Without waiting for the RPK-16 to go into production and being issued to the troops, a Russian company has already started production of a kit that can be used to convert airsoft versions of the Kalashnikov assault rifle into the corresponding RPK-16 variant. This speaks for great confidence in the weapon.

all4shooters.com also already reported in detail about a new US acquisition, the SIG Sauer MG 338.

Subscribe to the Newsletter
This article is also available in this language:
DEIT
Click here for more information on the topics:
MachinegunPro-zoneAK-47 KalashnikovRifles
That might interest you too: 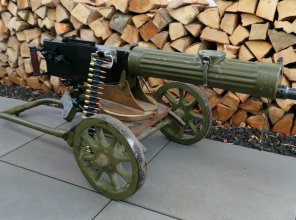 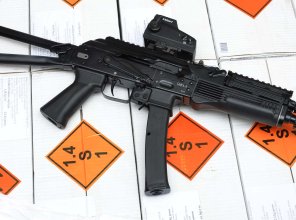