With the M&P 22 Compact Suppressor Ready, the U.S. manufacturer Smith & Wesson is offering a scaled-down version of the previously produced M&P 22 in full-size design. This follows the trend of other manufacturers to integrate the .22 Long Rifle, which is probably the most widely produced cartridge in the world, into their range of firearms. We took a close look at the compact rimfire pistol with threaded barrel – what can the buyer expect?

There has been an emerging trend among larger manufacturers for years to add rimfire counterparts of centerfire polymer pistols to their lineup. Carl Walther offers several rimfire PPQs, Glock came around the corner in 2019 with the G44, and Smith & Wesson has also long offered a .22 pistol modeled on its own centerfire Military & Police line.

The Military & Police series has a long tradition at Smith & Wesson and dates back to 1899, when the company launched the namesake in the form of a .38 revolver. Shortly after the turn of the millennium, S&W took up the label again, shortening it to M&P, and today include AR-based rifles and revolvers, as well as LE/military-oriented polymer pistols. The semi-automatic pistols of the M&P series have been established on the market for years and have already received an extensive model update to the next generation (marked as M2.0). Models such as the M&P 9 or the M&P 40 incorporate everything that is "state of the art" in the field of centerfire polymer pistols today. These include technical features such as a Browning-Petter locking system, a striker fired action and equipment details such as interchangeable backstraps and a tactical accessory rail on the front part of the frame.

For several years, Smith & Wesson offered a .22 LR gun, the M&P 22, which had almost identical dimensions to the centerfire M&P 9. In the meantime, however, it has disappeared from the range and only the M&P 22 Compact (with and without threaded barrel) tested here is offered. 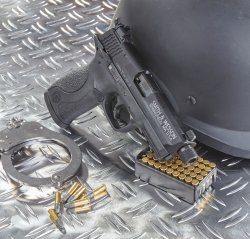 © Marcus Heilscher
The right side of the S&W M&P 22 Compact Suppressor Ready with the muzzle thread protected by a cap. Under the rear sight, the right lever of the double-sided thumb safety.

While the centerfire M&P pistols come with an established Browning-style locking system and are striker fired, the .22 pistols use a blowback action. Since the small rimfire cartridge can generate only a fraction of the energy of a 9mm Luger or a .40 S&W, the system and inertia of the assemblies had to be designed with correspondingly reduced forces.

This starts with the slide: it is made of aluminum alloy instead of steel. The barrel is pinned to the frame below the cartridge chamber by a metal block. The front area of this metal block has a recess in which the guide rod of the recoil spring engages. In addition, the 22 M&P Compact is also a single-action pistol with an internal hammer.

In terms of equipment, however, the rimfire M&Ps also features some points that their centerfire siblings bring to the table. These include the easy-grip polymer frame with a Picatinny rail and an identical controls layout with the tried-and-true takedown lever. The rimfire versions come with an ambidextrous thumb safety. Interchangeable backstraps modules, which serve to adjust the grip to different hand sizes, are not available here.

A circumstance that many companies bring about for their rimfire polymer pistols. The frame of the Compact and, accordingly, the grip are much smaller than the grip area of the discontinued full-size M&P 22, whose grip offered enough room even for larger hands, whereas the grip of the Compact test gun should be more ergonomically suitable for small to medium hand sizes. 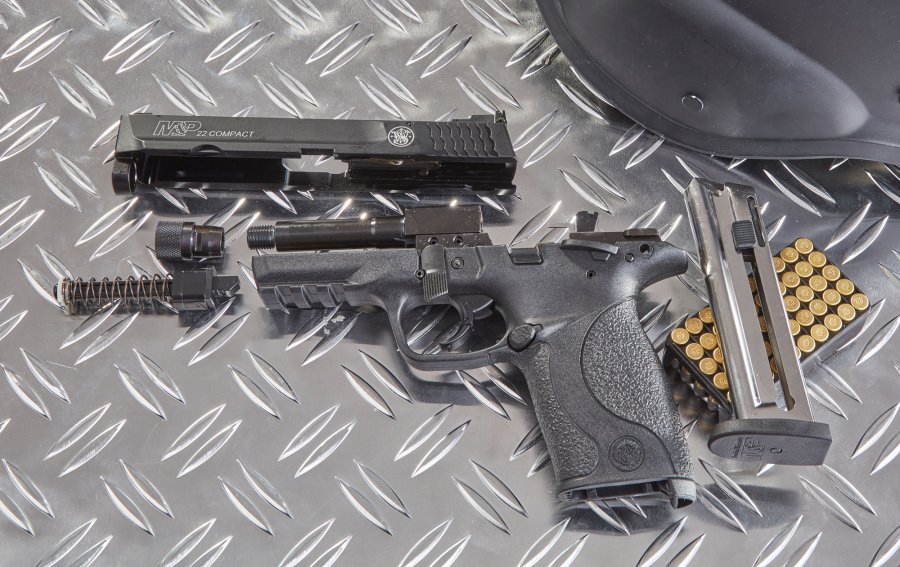 With an empty weight of 494 grams, the Compact is noticeably lighter than the full-size M&P 22 (647 g). The sights are adjustable in height and driftable with a rectangular cutout and two white dots. A high target front sight with a white dot indicates the suppressor ready variant of the test gun. In addition to a regular Compact, S&W also offers the Compact Suppressor Ready with a 3.56" threaded barrel (3/8"-24). The single-action trigger of the test gun broke at an average of about 2,450 grams. For a rimfire utility pistol, the value is okay, but for sport-oriented shooters, it might not be the first choice, coupled with a slightly scratchy slack. The SA trigger of a recently tested M&P 22 (full-size) recently showed that it can also be lighter, with a trigger weight of 1,750 grams.

First it was off to the 25-meter pistol range. Here, the gun was initially fired from the Heymann Guntester. In addition to determining the accuracy, a LabRadar measured the velocity of the fired bullets in parallel with each shot. With the RWS Pistol Match load, a group of 1.93”/49 mm was possible. It is particularly pleasing that the M&P 22 Compact functioned trouble-free with all types of cartridges, a circumstance that is not true for all service pistol-style rimfire pistols. A recently tested full-size M&P 22 proved to be somewhat more susceptible to malfunctions with weak .22 cartridges. Spring forces and its lighter aluminum slide provide the Compact with a wider functional reserve for the rimfire ammunition used. The compact sights ensure fast target acquisition thanks to their white dots. Thanks to the small rear sight blade and the adjustment option, sights can also be used for sporting purposes.

It is a nicely equipped rimfire offshoot of the large centerfire M&Ps. In addition to the controls layout typical of the series, the fact that the tested Compact is noticeably less sensitive to ammunition than the test gun in the full-size version is particularly pleasing. Interchangeable backstraps would be desirable for the rimfire M&P too.

Subscribe to the Newsletter
This article is also available in this language:
DE
Click here for more information on the topics:
Smith & WessonPistols.223 Remington
That might interest you too: 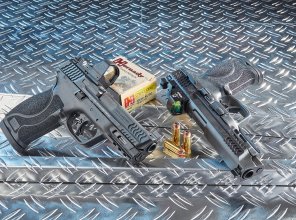 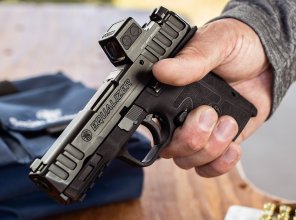 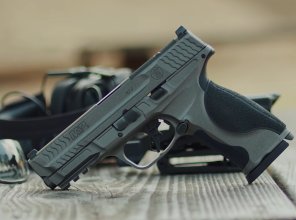 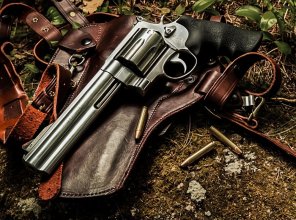 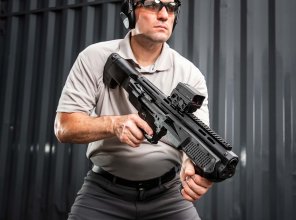 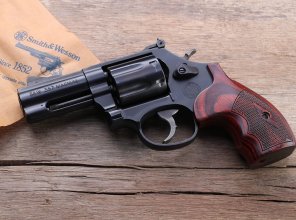 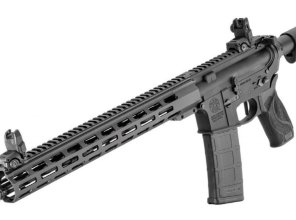