Two new models equipped with a Trijicon Ruggedized Miniature Reflex (RMR) sight and chambered in 10mm have been added to the TRP 1911-style series. Is it the hour of redemption for the long-neglected 10mm Auto cartridge?

It seems the hour of redemption has come for the 10mm Auto: Springfield Armory has announced two new models of its 10mm TRP series 1911 pistols, the 1911 TRP 10mm RMR with 5 in / 127 mm barrel and a long slide version with a 6 in / 152 mm barrel, both equipped with a Trijicon Ruggedized Miniature Reflex (RMR) sight. These new versions add to the standard 1911 TRP model, which was already offered in .45 ACP and 10mm calibers.

After some year of neglect, the powerful cartridge that was originally designed by the venerable Colonel Jeff Cooper, then reduced and redrafted as the .40 Smith & Wesson, is gaining popularity again in its original form. It looks like it, at leat, judging by the number of new revolvers and pistols being chambered for it. 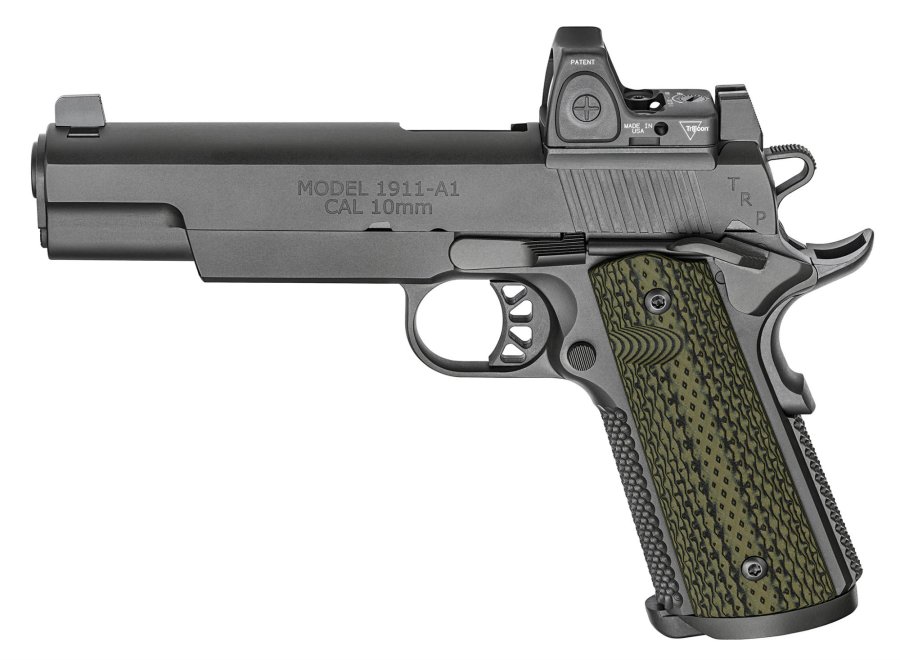 The Trijicon Ruggedized Miniature Reflex sight is specifically milled into the slide of the Springfield Armory 1911 TRP 10mm RMR.

The TRP in the name stands for “Tactical Response Pistol”, and Springfield Armory’s TRP series is “designed to work under the worst conditions you’ll encounter”, according to the manufacturer. These guns feature in fact a forged national match frame and slide mated to a match-grade, stainless steel, fully supported barrel. Trigger pull is 4.5 – 5 lb. 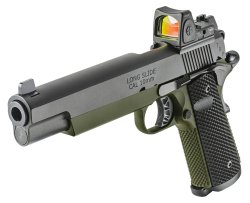 The long slide version has a 6-in barrel.

The new 10mm RMR iterations are available with a Trijicon Ruggedized Miniature Reflex sight specifically milled into the slide and crafted from 7075-T6 aluminum to mil-spec standards. The reflex sight also has a patented shape that absorbs impacts and diverts stresses away from the lens, increasing durability. Night sight are integrated.

The magazine is the same for both models, a stainless steel 9-round type with slam pad. Frame and slide have a Black-T finish – for the long slide version the frame has a Black-T OD-Green Finish. 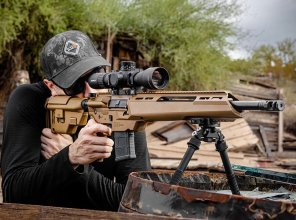 Springfield Armory's SAINT rifle family welcomes the SAINT Edge ATC. Built around a patented aluminum chassis and specifically designed to deliver maximum precision in the AR platform, the new rifle is available in both standard black and Elite Coyote Brown versions. But the difference is not just in colors... 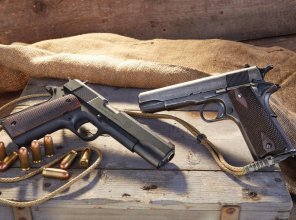 John M. Browning's legendary Model 1911 pistol design is one of the world's most famous firearms. Countless variants exist, some of them considerably modernized. A comparison with a historic Colt M1911 "Black Army" pistol from 1918 shows exactly what the similarities and the differences are – although the new gun from Springfield Armory is closely built to old specifications: what has happened in … 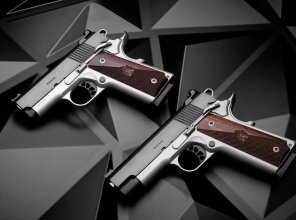 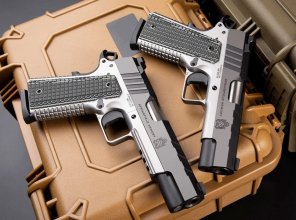 Two new options, a 5" model in 9mm and a 4.25" model in .45 ACP, add to the Emissary series. Designed for carry and display, the pistols “with an air of custom refinement” from Springfield Armory feature a forged steel construction and two-tone finish, bull barrel, skeletonized hammer and flat-faced trigger. 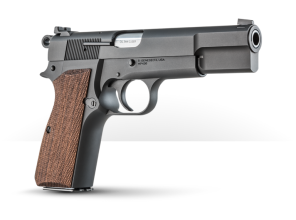 For the US manufacturer Springfield Armory, which also established its world fame with 1911 pistols, it is only a logical step to launch the brand-new SA-35 in 9mm Luger, another milestone in the history of firearms by the genius John M. Browning. In the flood of polymer pistols that resemble each other like peas in a pod, the SA-35 is a pleasant exception. 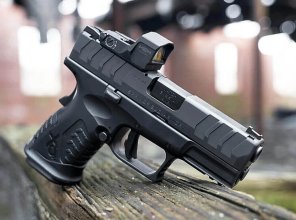 The new version of the 9mm carry handgun introduced a few months ago features a removable seamless cover plate that reveals a mounting location for the optic of your choice. The XD-M Elite 3.8″ Compact OSP is offered as both a standalone pistol and with Springfield Armory's HEX Dragonfly micro red dot. 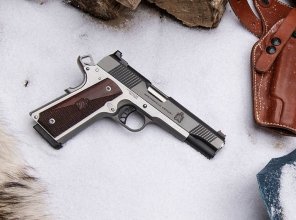 IWA OutdoorClassics 2021 / New distribution partnership between Springfield Armory and RUAG Ammotec. The well-known US firearms manufacturer Springfield Armory wants to strengthen its presence in Europe from 2021. To this end, it is relying on RUAG Ammotec as its exclusive distribution partner and its strong European network of sales companies. Read more here on all4shooters.com. 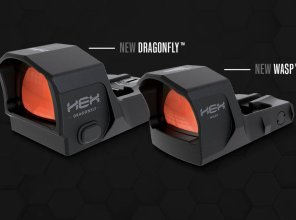