A contribution from Tino Schmidt12/30/2021
Dieter Licht
Generations (from top): original Swiss SIG P210-2s, including the German SIG P210 and…

The development history of the P210 in all its variants basically began with the delivery of the Danish army M49 pistol in August 1948. Whether and when the history of the most accurate service pistol on the planet ended is a matter of debate or a question of perspective. For fans of the Swiss-made P210, the final chord sounded in 2006, when SIG and SAN Swiss Arms in Neuhausen am Rheinfall ceased production after almost 60 years. Even today, the value-stable pistols from Switzerland, from the P210-1 to the P210-7 in .22 Long Rifle caliber, are traded for good prices on the used gun and collector market. To the delight of many centerfire pistol enthusiasts, the classic experienced a renaissance in 2010 when SIG Sauer in Eckernförde resumed production. A number of sensible modifications were directly incorporated into series production. The more massive "heavy frame" grip was now part of the standard equipment of the new, German SIG Sauer P210 Legend, as was the elongated grip spur, which protects against the P210's notorious hammer bite.

Dieter Licht
...finally the newcomer in the shape of the American P210 Target.

The finish was also adapted to the times. Instead of bluing, there was now a QPQ coating. In addition to the P210 Legend with a barrel length of 120 mm, fixed sights and a left-hand safety lever above the magazine release button, the P210 Supertarget with a barrel length of 152 mm, micrometer sights and an ergonomically better 1911-style thumb safety saw the light of day a year later. The decade of German P210 production then came to an end with the regrettable closure of the SIG Sauer plant in Eckernförde, Germany, in the summer of 2020.

It was already a big surprise when the giant from the East Coast showed a P210 from US production for the first time in 2017. Because in the USA the 6"/152 mm sporting pistols do not enjoy the status as they do inEurope, they have only included the original version with 120 mm barrel length in production to date. But "original" is to be seen relatively, because even to the modified SIG Sauer P210 Legend from German production there are a few decisive changes.

Modified action of the SIG P210 Target from US production

The most technically extensive intervention in the classic design is the change in the locking system. The original P210, like other classic pistols such as the Colt Government 1911 A1 or the FN Browning High Power, locks with two lugs into corresponding slide recesses, while the American P210 Target, like almost all modern service pistols on the market, uses the Browning-Petter-SIG system, in which a squarely designed cartridge chamber locks into the ejection port. The closed control cam of the original P210 was retained. On our test gun, the main components were matched to each other with very low tolerances. The switch to the new system was made for efficiency reasons, as it is cheaper to produce. 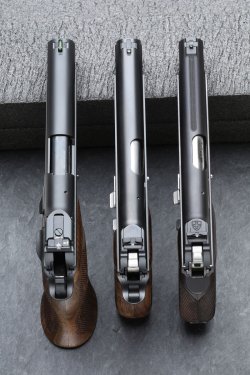 We liked the adoption of the generously sized, single-sided 1911-style thumb safety from the German SIG Sauer P210 Supertarget, which is far more ergonomic than the original Swiss control above the magazine button. Probably SIG Sauer USA chose this thumb safety so that the many American 1911/2011 users would not have to change. We also like the fact that the short P210 Target is equipped with an adjustable micrometer rear sight with a green fiber optic front sight. The extended wooden grip panels, which come from the Californian manufacturer Hogue, also look good on the P210 from New Hampshire. Shooters with large hands will appreciate this feature, as the P210 steel grip is basically quite short. Due to the different contour of the beavertail, the grip panels offered for the SIG 210 Legend/Supertarget may not fit. The single-stack sheet steel magazines with a capacity of eight 9x19mm cartridges from German production or from the Italian manufacturer Mec-Gar can be used without hesitation. The trigger also corresponds to the typical P210 characteristics. Even though the measurements did not exactly yield an inspiring 2,068 grams, it has to be said in its honor that around 1,300 grams are allotted to the first stage trigger travel and thus only around 700 grams are required for the actual release. The trigger travel is quite short and it is also not exactly predictable when the trigger will break. With a range of 68 grams in 10 measurements, the differences in trigger pull weight are pleasantly small. 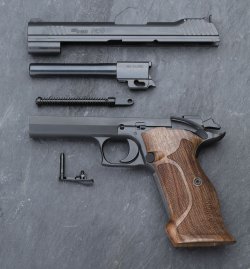 Dieter Licht
The SIG Sauer P210 Target from the USA disassembled into its main components.

Practical test: on the shooting range with the SIG Sauer P210 Target

Ten different types of ammunition with bullet weights ranging from 100 to 147 grains were used to determine whether the US-made SIG 210 Target could follow in the footsteps of its famous European predecessors. As typical German precision fanatics, our expectations were quite high. Be that as it may, we achieved the best result of 1.41”/36 mm with our handload, consisting of 4.3 grains of Vihtavuori N320 and a 115-grain Hornady Action Pistol (HAP) bullet. Hardly worse was the GECO 124-grain full metal jacket affordable factory ammunition with a 1.53”/39 mm group. Half of all loads were under the 2”/50 mm limit.

Dieter Licht
SIG Sauer P210 from US production: the internal slide guide was of course also adopted in the latest version, but the slide contour is somewhat more massive.

Our test conclusion: the P210 Target from USA

The SIG P210 Target from US production with a modified locking system and ergonomically improved features can't quite match the tradition of the classics from European production in terms of shooting performance. Nevertheless, you get a rock-solid, nicely made all-steel pistol with which you can always hold the target 10 with selected ammunition. In this respect, the price of 2,349 euros can be considered justified.

For more information about the manufacturer's firearms please visit the SIG Sauer website.

Subscribe to the Newsletter
This article is also available in this language:
DEIT
Click here for more information on the topics:
SIG SauerPistolsGECO9x19 mm (9 Luger)
That might interest you too: