Test: SIG Sauer P320 in .45 ACP – The SIG Sauer service pistol in the popular US caliber

Although the first model variants in .45 ACP caliber reached the American market as early as 2015, SIG Sauer has only been adding the modular polymer pistol P320 in .45 ACP to its product range in Europe for a few months now. We have tested the SIG Sauer P320 in .45 ACP on all4shooters.com for you.

Although the P320 series is only five years old, SIG Sauer can certainly not complain about the commercial success of this striker-fired, polymer pistol. In the meantime, the gun has been acquired by various law enforcement agencies worldwide. In addition, two years ago, all branches of the US Armed Forces ordered a total of well over 400,000 pistols, known as M17s which, together with the M18 compact model, are replacing the somewhat outdated Beretta M9s. One of the main advantages of this pistol series is its modular design, which allows the user to individually change the caliber, grip and overall size of the pistol.

The design of the SIG Sauer P320 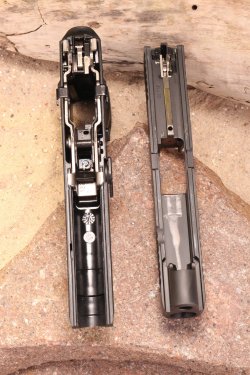 Michael Schippers
Inside the plastic grip is the typical steel frame of the SIG Sauer P320.

The trademark of the P320 series is the combination of a striker-fired system with a modular chassis. The steel insert within the polymer grip bears the serial number. In its home country, SIG Sauer calls this element a "Fire Control Unit". The main differences compared to the P250 pistol series include the lack of an external hammer and the 320 trigger system. The system is based on a design that always completely cocks the striker with each cycle, a trend that has been common for years in the design of modern service pistols. From a purely technical point of view, this is a single-action system in which the pressure on the trigger first deactivates automatically the safety devices and then releases the striker. With this principle, trigger travel, pull weight, reset travel of the trigger blade and similar parameters can then be adapted to the intended application or to the tender specifications – within the limits of what is technically feasible and reasonable in terms of safety and operation.

For the trigger finger, however, the trigger of the P320 feels more like a partially preloaded system with a medium travel. Except for the easily replaceable grip, there is not much polymer on the P320. Magazine follower and base plate are polymer, otherwise the pistol is fully made from steel.

New in .45 Auto Colt Pistol – What are the differences to the SIG Sauer P320 models in smaller calibers? 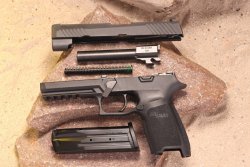 Michael Schippers
To disassemble the P320, there's no need to pull the trigger. After operating the take-down lever, the entire upper part of the SIG Sauer can be pulled off.

SIG Sauer has been producing the P320 in the most American of all pistol calibers since 2015. The test gun came in the fully grown standard version called "Full Size" with a 119 mm long barrel (4.7 inches) complete with matte black surface finish, which SIG Sauer calls "Nitron". The pistol comes factory with a polymer grip in the Medium hand size, an extra magazine and a test target.

In contrast to the smaller 9mm Luger, .40 S&W and .357 SIG calibers, the caliber exchange kits in the USA contain the indication that the use of a smaller caliber exchange system on a .45 frame is "not recommended". In addition, there are no plans to offer interchangeable parts for the P320 in .45: only the exchangeable (and freely available) P320 polymer grips are offered in various sizes and designs. There are probably some differences between the frame of the .45 P320 and the smaller caliber versions, not just the shorter .45 ejector. Maybe this won't make the change from the larger chassis of the .45 ACP to 9mm Luger completely impossible, but then, among other things, probably not all safety systems will work the way the manufacturer intended. After all, SIG Sauer USA will have had something in mind when explicitly advising against changing from .45 ACP to smaller calibers. 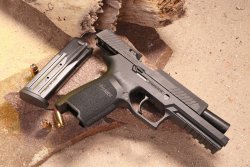 Michael Schippers
Equipment details such as the front cocking serrations, the Picatinny rail and controls that can be operated from both sides are part of the basic design of the SIG Sauer P320.

As for capacity, despite the double-stack magazine you must content yourself with 9 cartridges. The two magazines supplied had a hole marked "10", but a 10th cartridge could not be accommodated by force, at least in the magazines on hand. In the test gun in .45 ACP shown in the pictures, trigger travel was comparatively short: after about 3 mm of light pull, a consistent resistance of about 2.5 kg had to be overcome over a travel of another 3 mm. A break as a clearly perceivable trigger release was not found here. Trigger reset remained relatively short – the first 3 mm of the overall trigger path are not needed by the trigger blade for a new shot.

Besides the trigger and modular construction, the P320 conceptually follows the current standards in pistol construction,and the .45 version makes no exception. There is not much to be operated on the gun: the P320 features a magazine release that can be reversed and an ambidextrous slide stop lever. The take-down lever alone is found on the left side only of the frame. To disassemble the pistol, no pressure on the trigger is needed. The short, but well-formed beavertail and the fine, non-slip grip textured area provide a subjectively very good hand position. The steel sights correspond in material, dimensions and sighting pattern to the usual requirements of a modern self-defense gun. In poor light conditions, three luminescent white dots help in target acquisition. There was little to criticize with regard to processing. The barrel showed a noticeable side play in the chamber area, but was bombproof in the slide housing at the muzzle. By the way, SIG Sauer manufactures the barrel from stainless steel, just like the frame. The play of the slide on its guides was clearly perceivable, but for a modern service pistol it was comparatively small and never audible even when shaken. The finish of metal and polymer appeared very accurate overall, and there were no ugly tool marks inside the pistol.

With the new SIG Sauer P320 in .45 ACP on the shooting range 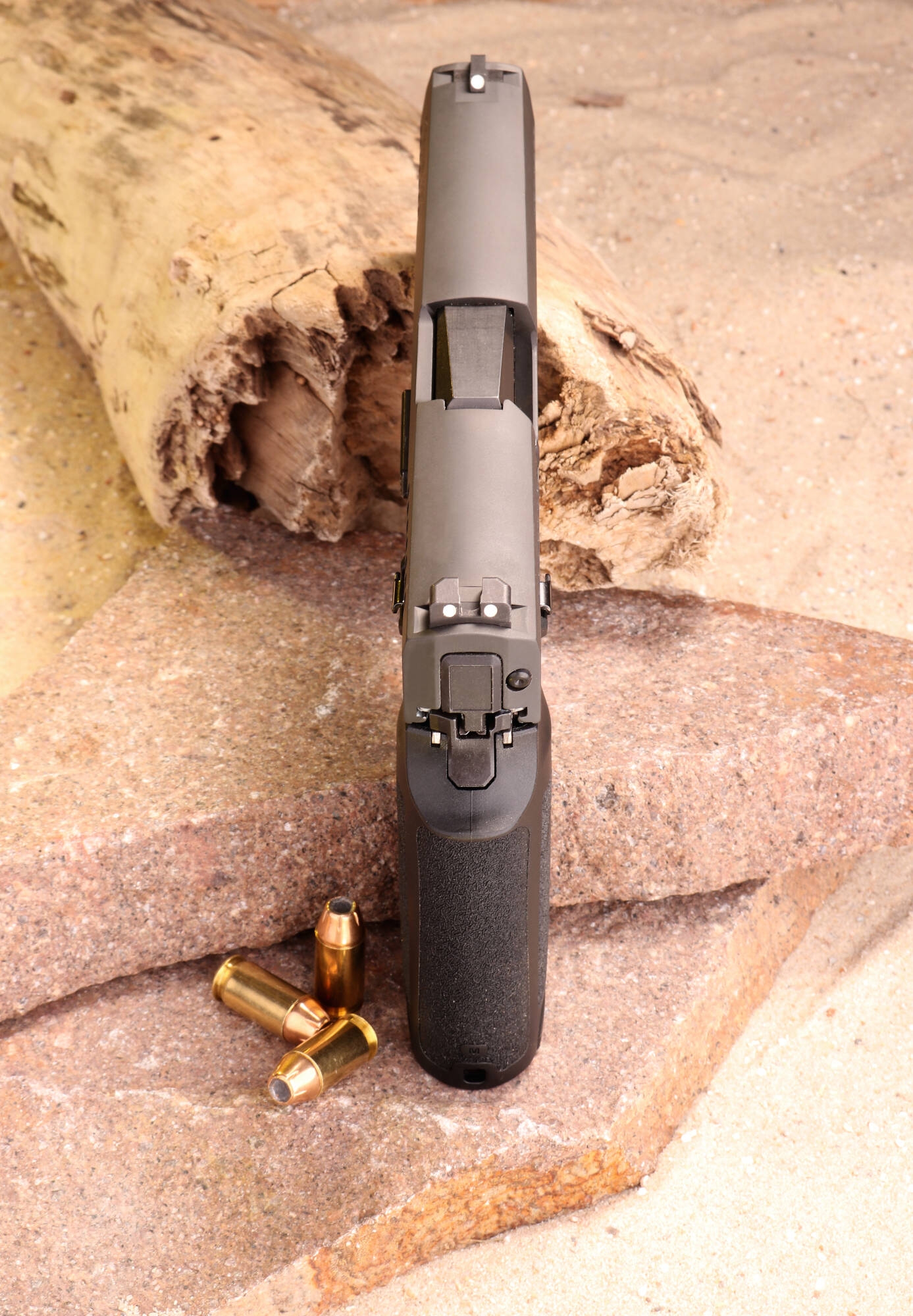 Michael Schippers
The sights of the SIG Sauer P320 with their white dots are made of steel. They can be laterally adjusted.

In terms of handling, the test gun made an all-round pleasant impression. The magazine release as well as the slide stop lever were easy to reach by the thumb, but with a conventional two-handed grip with both thumbs pointing towards the muzzle, otherwise just far enough away that the controls could not be accidentally operated.

Due to the slim magazine and the equally slim grip, the hand position is more similar to a conventional 9mm pistol than a typical ,45 with a double row magazine. Without exception, the test gun ejected the fired cases quite positively. The P320 always cycled reliably even with the weakest factory cartridges, even with a three-finger grip and extra-limp wristing. Firing behavior remained pleasantly smooth despite the relatively low weight for a .45 in service size. Muzzle flip was noticeably stronger than, for example, a pistol in 9mm Luger, but felt recoil remained well controllable even when firing +P ammunition. The trigger of the .45 proved effective on the shooting range both in fast firing strings and in comfortable target shooting. For a trigger with a medium-length travel, which does not require any additional manual safety devices, the P320 shot beautifully out of the box. For purely sports use, a crispier trigger would be desirable, as would an adjustable match rear sight. However, this version was not developed for competition, and alternatively SIG Sauer also offers the P320 X-Five version for the sports sector.

In view of the appealing shooting performance and clean workmanship, the .45 ACP version of the P320 appears to be a good choice for anyone interested in a full-grown polymer pistol in the old US issue caliber. In addition, the P320 is also conceptually sound due to its safe disassembly and modular design with adjustable grip. And who knows: maybe in the future the trick of extending the modular system of the P320 in 9mm, .357 SIG and .40 S&W to the .45 models will succeed.

Further information on the P320 in .45 ACP can be found on the SIG Sauer website.

Here you can find the test report of the SIG Sauer P320 X-Five in 9mm Luger.

Subscribe to the Newsletter
This article is also available in this language:
DEIT
Click here for more information on the topics:
SIG SauerPistols.45 ACPSemiautomatic pistolsTest
That might interest you too: