The .380 Auto chambered SIG Sauer P232 Black is a real classic for its almost legendary reliability, portability and accuracy. Still available in very small numbers, the P232 is a compact semiauto pistol built as a concealed carry or backup gun, that's Vintage in looks but very, very modern in concept and manufacture

In our humble opinion, the .380 Auto SIG Sauer P232 is a legend among small, compact semiautomatic blowback operated pistols for personal defense and concealed carry.

Still in production twenty years after its introduction, and well over forty since the P230 model was presented from which it is based, the P232 is proudly defined as a "high-precision classic among compact weapons" by the German manufacturer.

The P232 has also been manufactured chambered in the smaller 7.65mm Browning round, but we will focus on the .380 ACP or 9mm Short version, the only one that is still in very limited production and available on the market.

The P232 is based on the famous P230, which in turn is the heir to Sauer und Sohn's very innovative 38H, a compact semi-automatic pistol from the late 30's in Germany.

Many technical solutions pioneered in the 38H pistol  are found in the 230, such as the single and double action trigger, the decocking lever, and the simple blowback action with coaxial mainspring around the fixed barrel  to keep the firearm compact and helps to keep the bore axis very low in the hand. 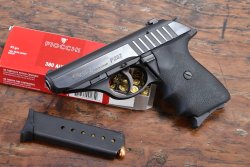 The P230 pistol was adopted by many Law Enforcement agencies and some military Special ops groups, such as British SAS and the Swiss and Japanese police.

The latter adopted the P230 in the 7.65 Browning caliber as a new weapon to replace the .38 Nanbu M60 revolver carried by some Metropolitan plainclothes officers (such as the Special Detectives), but the gun required over 60 changes and improvements, such as adding a lanyard ring and the presence of a manual external safety lever.

This weapon was adopted as P230-JP; SIG Sauer eliminated the lanyard ring and safety, but keeping the other 60 improvements, almost all internal, into its serial production. This updated pistol will be presented as the new P232. 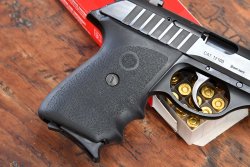 Franco Palamaro
The single wrap around rubber grip is made by Hogue and is stock on the SIG Sauer P232 Black.

The P232 is a pistol with a fully metal build that uses a with a blowback system; the stainless steel, fixed barrel is 92 mm long, the recoil spring is coaxial to the barrel and the single stack steel magazine holds 7 .380 Auro rounds.

The trigger is a double and single mixed action, with inertial striker and exposed hammer. There's and automatic safety on the firing pin.

The hammer is protected on its sides by the slide extensions, and can be manually cocked because its crest slightly protrudes from the slide. The magazine release lever is located at the heel of the grip, a very classic solution seldom seen in modern firearms; many experts consider this solution to be impractical.

However, after getting a bit used to this system, changing a magazine can be done with a reasonably acceptable speed.  On the plus side, with this system it's guaranteed that an accidental magazine release cannot happen at the worst moment...

The absence of any kind of manual safety is a very modern choice, considering that the pistol was introduced in the mid-1970s; there's an automatic safety on the striker.

A feature of the P232 is the decocking lever on the left side of the gun, a true "trademark" on almost all SIG Sauer hammer fired handguns.

The lever allows to safely disarm the hammer with a live round chambered, leaving the hammer in what seems to be a half-cocked position; however, this is its normal resting position since the firing system is based on a rebounding hammer. It is a very safe way to carry the pistol - as safe as a double action revolver, anyway. Another control cospicuously missing is the hold open lever. Once le last shot is fired, the slide is held back by an internal mechanism, but to load the first round from a fresh magazine, the slide needs to be slightly pulled back.

This pistol is available in three different models; the Black version we are testing today uses a black, hard anodized aluminum alloy frame and a blued steel slide.

The SL version features a full brushed stainless steel build, including slide and frame, and therefore weighs a little more.

A DuoTone version is also available. In all models the barrel is always stainless steel. The open sights are of excellent quality and perfectly sized, the rear sight is mounted on a dovetail locked with an Allen set screw and is adjustable in drift while the front sight is fixed.

The pistol's appearance is very classic, "vintage"; actually, many would say outdated or even old, but the P232 has a very refined and elegant design, with streamlined and clean lines.

Relatively light and compact, with no protrusions that can snag in loose clothing during extraction or be uncomfortable during close concealed carry. The pistol does not have any manual safety to fumble with when it really counts and is perfectly balanced for comfortable and safe use.

It is not too small to be difficult to handle, it is not so large to hinder concealment even in summer clothes.

The grip, thanks to the high-quality wrap around Hogue grips fitted on standard models, is particularly comfortable and worthy of much more bulky weapons.

The effort to pull back the slide is to chamber a round and cock the hammer is definitely more that your average Browning locking system pistol, but is less than expected and much less than most Blowback Guns, mainly because of the weight of the slide.

The recoil is sharp, nervous, it is a fast pulse that is swiftly delivered to the hand, however it's never unpleasant, even with +P cartridges - such as the Fiocchi Black Mamba - I would say quite controllable and much less violent than the vast majority of the ultracompact modern pistols in the same caliber; pistols that also have the advantage of a Browning positive locking system, such as the Glock 42. 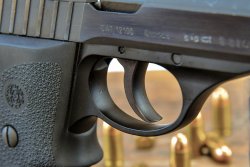 Franco Palamaro
The smooth, curved trigger is excellent; clean and very crisp , with almost no overtravel.

Accuracy is excellent, with very tight and above average groups at 7 and 10 meters; the three-point open sights, with their more than generous size, display a grat sight picture despite the reduced sight length, allowing the shooter to have good results even at greater distances.

It has to be considered, however, that the overwhelming majority of shootings occur at distances well below 7 meters.

Extraction is fast and safe, using appropriate holsters; The holster we're using is a generic inside Tech-Grip Blackhawk!, very comfortable and almost invisible.

We usually carry the P232 with a loaded chamber and half cocked hammer (Condition 2) , always ready; "Israeli" carry (Condition 3) of which we are not the best supporters, is not really suitable for this gun.

The only other control apart from the decocking lever and obviously the trigger on the P232 is the disassembly lever on the frame in front of the trigger guard, which when rotated remains on the gun, thus avoiding losing it.

The slide can be pulled back, unhooked from the guides from behind and then removed out from the front for easy and quick field stripping . The barrel stays fixed to the frame.

Our opinion of the P232 after this test is that this gun can be considered a benchmark for quality, balance, performance and concealment among small compact defense and concealed carry hanguns. The .380 Auo / 9mm Short chambering in our opinion is more than adequate for close personal defense, and the gun is by definition an excellent choice as an everyday concealed carry and backup gun, even in summer clothes.

Subscribe to the Newsletter
This article is also available in this language:
IT
Click here for more information on the topics:
SIG Sauer9 mm.380 ACP (9 Short)PistolsSemiautomatic pistols 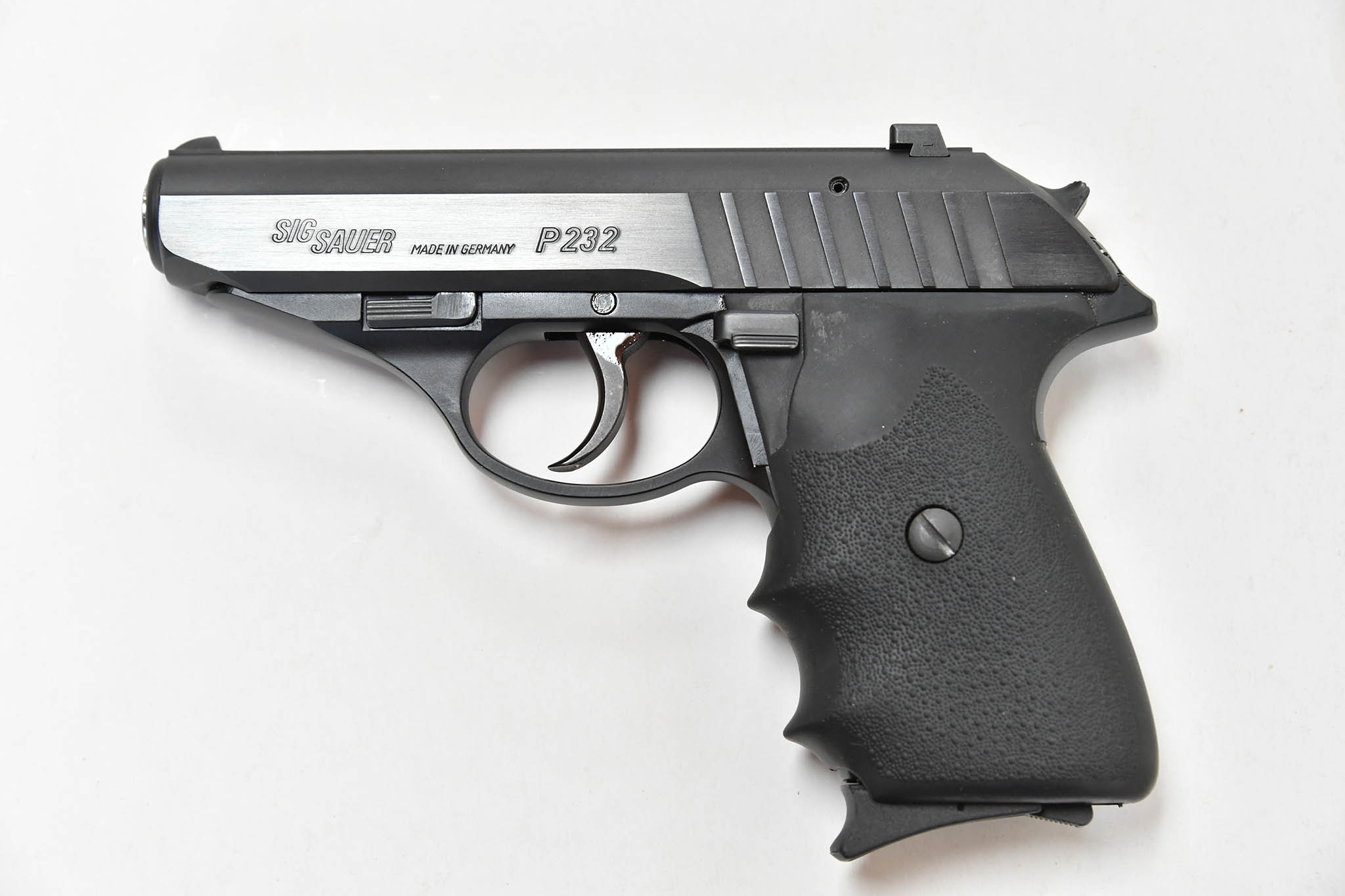