Since last summer, SIG Sauer has been offering a new  P226 match version from the X-Five series. This 9 mm semi-automatic gun comes from SIG Sauer's Mastershop and is elaborately refined. all4shooters.com tested the brand-new sports pistol by SIG Sauer.

At the beginning of the year, SIG Sauer presented its Mastershop new products to the interested public at the IWA in Nuremberg, Germany. Among the refined all-steel products – and in addition to aesthetical delicacies such as the P210 Midnight and the P226 Facettes – there was also the competition-tuned P226 Performance. 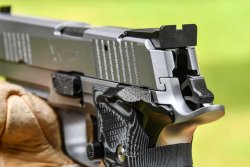 The SIG Sauer P226, originally developed for the military and police, is the original model of the X series. For this reason, the X-Five models, and the Performance version presented here, are based on the same Browning-Petter-SIG locking system . Under the cartridge chamber there is a cam providing the tilting movement during cycling and whose rear element also serves as a feed ramp. A solid spring guide rod with two springs sits under the barrel and chamber. Like many modern self-loading pistols, the P226 does not require a bushing at the muzzle. The 5” / 127 mm long barrel features a chamfered muzzle and 6 right-hand grooves. The barrel assembly is very well fitted. In the ejection port area no play is noticeable when locked. SIG Sauer mounts an adjustable micrometer rear sight with a generously dimensioned ribbed leaf, giving the shooter a rectangular 0.106” / 2.7 mm notch. A 0.126” / 3.2 mm wide undercut target front sight sits on the front as a further aiming aid. 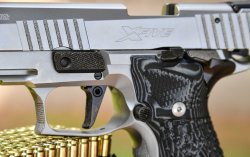 An important innovation can be found on the outer skin of the stainless-look gun. Textured areas can be noticed at numerous points on the slide and grip, which are not to be found on other X-Five models. These fine textured areas were created in the Mastershop by means of a laser. Due to the very fine details, this process is quite complex and requires a lot of energy. But the result is impressive: the raised areas of the cocking serrations on the slide are laser-finished this way. The already grippy serrations now offer an even better purchase and allow better control on the slide. The more striking look of the cocking serrations now also stands out more effectively from the rest of the slide. But almost all controls of the Performance received the laser treatment. In the Mastershop, the new laser treatment was given to the disassembly lever, the trigger blade, the hammer top, the thumb safety levers and parts of the grip. The hammer, in particular, benefits from the very handy new texture of its surface. Now the shooter feels the slightest slipping movement of the hammer – when cocking it – with millimeter precision. The front of the trigger blade also bears the new laser texture. In addition to improved grip, the focus here is also on a noticeable gain in control. The disassembly button and the thumb safety lever also benefit from the heavily punched surface: although the shooter does not need any precise feedback here, as in the case of the trigger blade or the hammer, the finger force can be transferred more effectively to the component here thanks to the handier surface. The laser texturing thus not only increases control but also improves power transmission. 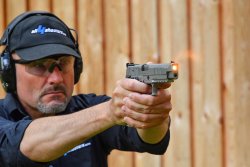 Franco Palamaro
With G10 grips and grippy texture, the X-Five Performance feels perfect in the hand.

In addition to the mandatory tactical accessory rail at the front, the grip also features an elongated spur at the rear, which allows high positioning of the shooting hand and protects the hand from hammer bites at the same time. The SIG Sauer guys mounted grey-black G10 grips with a pleasant, non-slip surface texture. The grip front also features an additional laser texture. Overall, the grip offers more than sufficient purchase even with sweaty hands. The lower end of the grip is distinguished by a short metal magazine funnel, which is connected to the grip by means of a screw on its underside. A special attention at a high-priced competition pistol is the trigger. In addition to the upgrading laser texturing, the single action trigger has an adjustable pull weight. The TriggerScan measuring protocol certifies that the trigger has a medium trigger travel of around 4.5 mm to the release point. The force curve rises relatively uniformly on the first 3.5 mm. Then there is a clear wall, after which the trigger breaks. The trigger pull weight is 30.97 oz / 878 g. This low trigger weight is below the required minimum for many disciplines. However, this value can also be adjusted from the outside by means of an Allen key. With a few turns it is possible to quickly set the value to well over 35.27 oz / 1000 g. 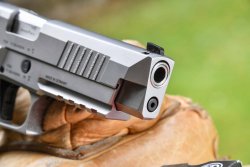 Franco Palamaro
The tactical accessory rail on the dust cover refers to the former scope of use of this competition pistol. The target front sight reveals that now sport is the order of the day!

SIG Sauer's new P226 X-Five Performance offers a noticeable increase in ergonomics and additional control. Workmanship and reliability are very good, and accuracy is also impressive. The single-action trigger, sights and jet funnel also leave nothing to be desired. The Performance version is a well thought-out gun optimized for competitions.

That comes at a price: this X-Five version currently costs 3799 euro – price may vary depending on the country.

Further information on SIG Sauer pistols can be found on the  SIG Sauer website .

Subscribe to the Newsletter
This article is also available in this language:
DE
Click here for more information on the topics:
SIG SauerPistolsSemiautomatic pistols9 mm9x19 mm (9 Luger)Test
That might interest you too: