The pistol will be purchased in two versions, a standard (full size) and a “concealed carry” version. The new pistols are expected to be delivered to all units by the end of 2019.

After the US armed forces, the Danish military has just selected a version of the SIG Sauer P320 as issue sidearm. As announced on the Danish Ministry of Defense website, the P320 X-Carry will replace all the handguns in the Armed Forces such as the M/49 (the venerable SIG P210 manufactured under Danish military contract). The SIG Sauer P320 X-Carry is a 9x19mm polymer framed, striker fired gun.

A “civilian” P320 X-Carry with standard 17-round magazine capacity.

Two versions will be purchased, a standard (full size) and a concealed carry version. From the pictures published by the Danish military, the “full size” version looks like a X-Carry with the addition of a P320 X-Five extended magwell (which is removable).

In fact, while the X-Carry holds 17 rounds, the Danes claim that their new guns will have a magazine capacity of 21 rounds – just like the P320 X-Five. It’s therefore likely that the “concealed carry” version will be a “true” X-Carry model without magwell extension and the usual 17-round magazine. 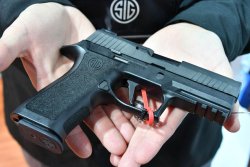 The new SIG Sauer P320 X-Carry is a compact model.

Besides the P320, other pistol were tested in a four-week trial period during 2017 under all conceivable conditions by users of the Special Operations, Military Police, Air Force and Army: the Beretta APX, the Canik TP9 and TP9SF, the Glock 17 and 19.

According to the Danish Ministry of Defense the SIG Sauer P320 X-Carry “performed best in the many tests that were part of the procurement process of new guns”.

The Danish Ministry of Defense also published a video about these tests – unfortunately, in Danish only: https://youtu.be/1ANG0e6N6aQ