The latest handgun made by the gunsmiths from Gardone (Italy) is designed with the military market in mind, but a civilian 9x21 has also been produced. We had the chance to test it in a sneak preview at the Beretta firing range, and impression it left was excellent.

A contribution from The Team of all4shooters / Roberto Allara09/18/2017

First and foremost, let’s get something straight. To satisfy my own personal curiosity or as part of my job, I’ve been examining weapons for the last forty-five years, perhaps even longer. So, I think I’m qualified to express an informed opinion. My opinion here is that the APX is the best handgun ever. I may change my mind if I get the chance to have a close look at a Lebedev, the ergonomics of which seem to be quite similar to the APX, but for the moment I’ll stick to my guns. In fact, more than anything else it’s the ergonomics of this gun that lead me to this conclusion. 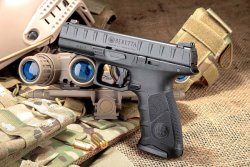 Michael Schippers
The Beretta APX seen from the left.

Despite the fact that just as we were going to print, the results of the US military tender for a new handgun came in, with the Sig-Sauer P320 winning the contract, it must also be said that the APX project manager worked for two and a half years with Sig-Sauer. In general it’s not easy for a striker-operated handgun with a polymer grip frame to be seen as hugely innovative in technical terms; models are improved on the basis of experience, and to iron out any rough spots on previous ones. 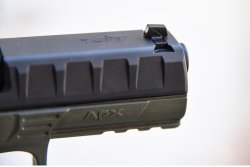 Roberto Allara
The front and rear sight are fitted in a dovetail.

So, on the basis of this assumption, I’d say that during the APX design stage the designers considered what could be improved in relation to the P320, which was the choice of many due to the range of adaptation of its grip, while the decision to use 9 mm Parabellum +P was cause for some perplexity.

The most important thing about a handgun to be used by military personnel who aren’t always specifically trained is, as I mentioned above, the ergonomics. One excellent example of how important this is was in the last world war, when the pistol that drivers, cooks and in general non-combatant soldiers were equipped with was replaced by a carbine, which was considered more intuitive to use. The flaw in that solution lied in the logistics, as it meant ammunition in another calibre had to be supplied, to replace the calibre the soldiers were already supplied with. Arming soldiers with a handgun that’s simple and intuitive to use simplifies the logistics. In fact, there will be three available calibres: 9 mm Parabellum, 9x21 and .40 S&W, but the second calibre is only for the national Italian market while the last, targeted specifically to the law enforcement market, meets the new American requirements for a hip holstered weapon, offering features such as modularity, and availability in various calibres.

The military will mostly use the 9 mm Parabellum, which is NATO standard. Another aspect of logistics is the need to keep weapons operational. In this sense the Beretta APX represents a significant advantage; the simple design means fewer spare parts are required. So, how many parts are in an APX? It depends. In MRP terms, in other words for those who must make sure the parts are in the works at the same time and on time, there are approximately fifty parts. For the military, there are twenty-three. 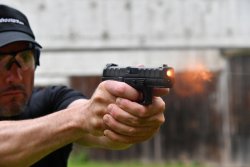 Franco Palamaro
The Beretta APX during the fire test.

Explanation: the assembly with the recoil springs, spring guide rod and retainer, which keeps the springs self-contained, is a one-piece assembly of four components. In short, if the priority is to get as many guns back into service as soon as possible, leaving more time-consuming repairs for later, you’ll need five parts: the slide-barrel-recoil spring assembly, the grip frame, the inner metal chassis which holds the rest of the gun and the two parts that hold it in place (the takedown lever and upper pin). What’s more, it’s quite hard to imagine there being problems with the grip frame of the gun, because when it’s removed from the metal chassis it’s really nothing more than a piece of plastic. But let’s take a closer look at the gun. 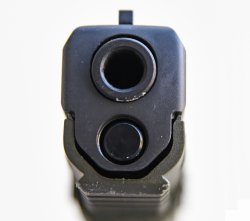 A closer look at the Beretta APX

The APX is a striker-operated handgun, but at first glance it stands out due to the full length slide serrations. This is more of a practical than aesthetic feature, as the new full length serrations make the slide easy to use even when wearing gloves. The rear sight represents quite a well-defined step on the top of the slide. Again, this is a deliberate feature, because if your other hand is occupied you can operate the slide by hooking the step on the edge of a piece of furniture or the top edge of a tactical belt.

The external controls include a reversible ambidextrous hold-open slide stop and the takedown lever, plus the magazine release button which is also reversible. There’s no manual safety. This is a fairly recent feature which may not be exactly what the military want. In consideration of the double action safety on the 1911 and certain Italian holsters for the Beretta 34 I’m not the only one who imagines military personnel prefer a handgun in their hip holster that’s not exactly fast to use. The magazine catch is on the front of the magazine, which translates into two positive features. The first is that there are no holes in the body of the magazine that could let dirt get in, and the second is that the catch engages by as much as two millimetres rather than the six-seven tenths of the traditional system. 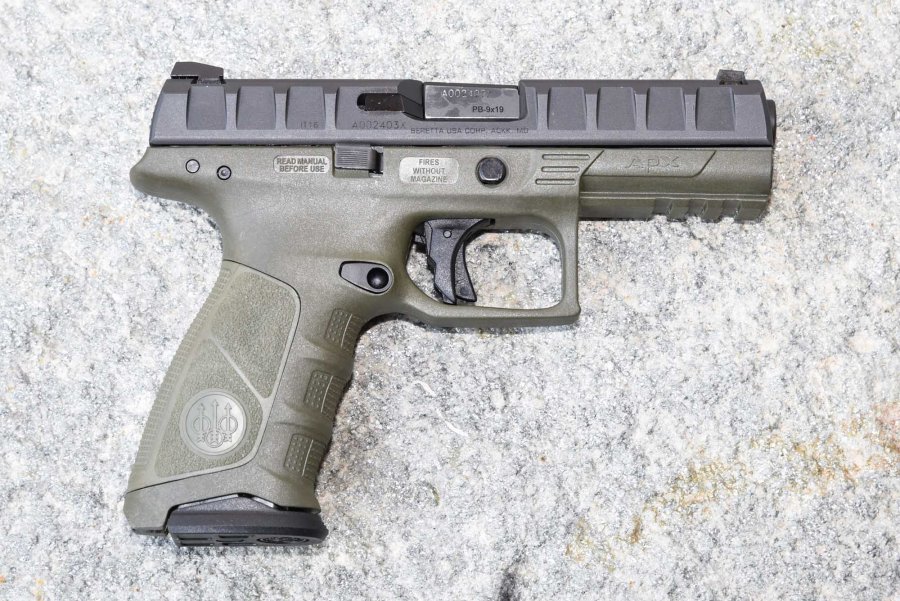 Roberto Allara
The Beretta APX from the right side.

The magazine floor is protected by a soft polymer pad. This way, magazines won't be damaged when dropped. The sights on the tested gun were traditional, three-dots ones, but we have been informed that tritium sights versions will be available too; the dovetail front e back-sight are good, at last, and they can be drift adjusted or replaced with sights of different heights.

After having a look at the outside of the gun, let’s take a look at the internal mechanism after field stripping the gun. First, press the end of the takedown lever from the right hand side, so it protrudes slightly out of the frame. Then, turn the lever downwards, so the slide-barrel-recoil spring assembly can be removed from the frame. Examining these components, it appears the slide stops against the polymer, which acts as a damper. 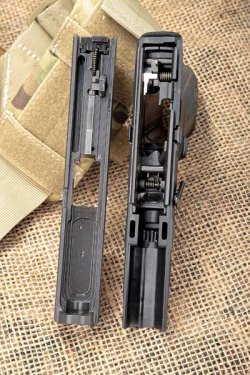 Michael Schippers
Inside the polymer frame there’s a metal chassis that contains the gun’s mechanism.

Inside the polymer frame there’s a metal chassis on which you can see the serial number through a window in the left half of the frame. This chassis contains the gun’s mechanism and can be replaced as one assembly with more detailed repairs done later or in a workshop behind the lines. There is one consideration to make concerning the ergonomics. The designer considered not only the trigger reach, in other words the distance from the rear of the frame to the trigger, but also  other measurements of a standard hand. 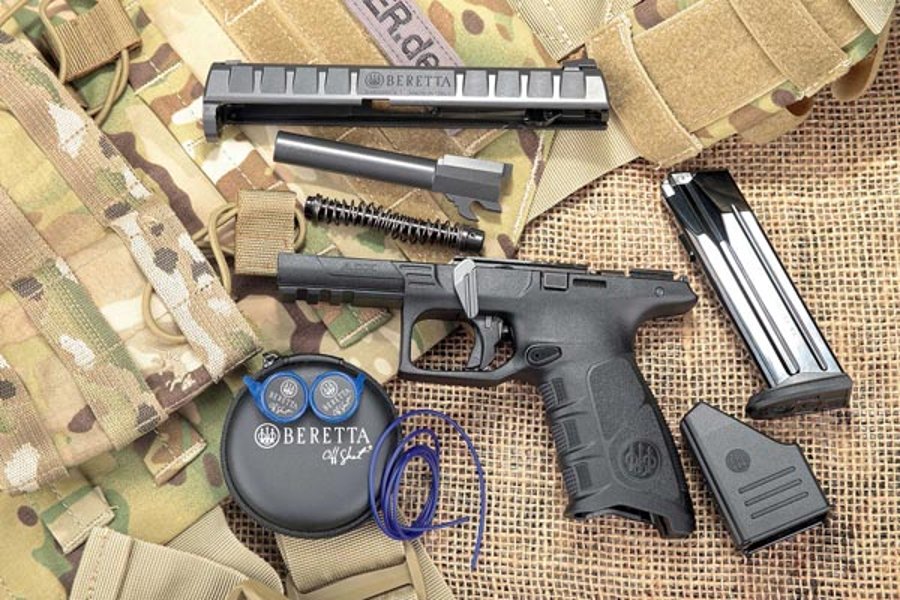 Michael Schippers
The Beretta APX stripped and its main parts. 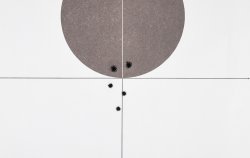 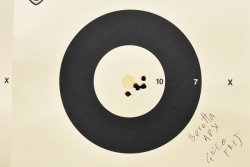 This, combined with the low barrel, makes the gun feel very natural in your hand when holding it even for the first time. This was proven not only by the ease with which everyone at the presentation took on the pop-up targets at the Beretta firing range, but also by the quality of the resulting shot patterns.

This shot pattern was fired in approximately 12 seconds - I’m quite practiced with the 10 second time for firing a standard handgun - starting with the gun held at 45 degrees to the ground, so the 12 seconds include aiming, which usually takes one and a half seconds. I aimed at the bottom of the black spot on the target, which is smaller than a man’s head. I’d never held the gun before and I didn’t shoot any rounds to get used to the trigger. Not bad for someone almost in his seventies.

Subscribe to the Newsletter
This article is also available in this language:
IT
Click here for more information on the topics:
Beretta9 mmMilitary firearmsPistolsPro-zoneSemiautomatic pistols 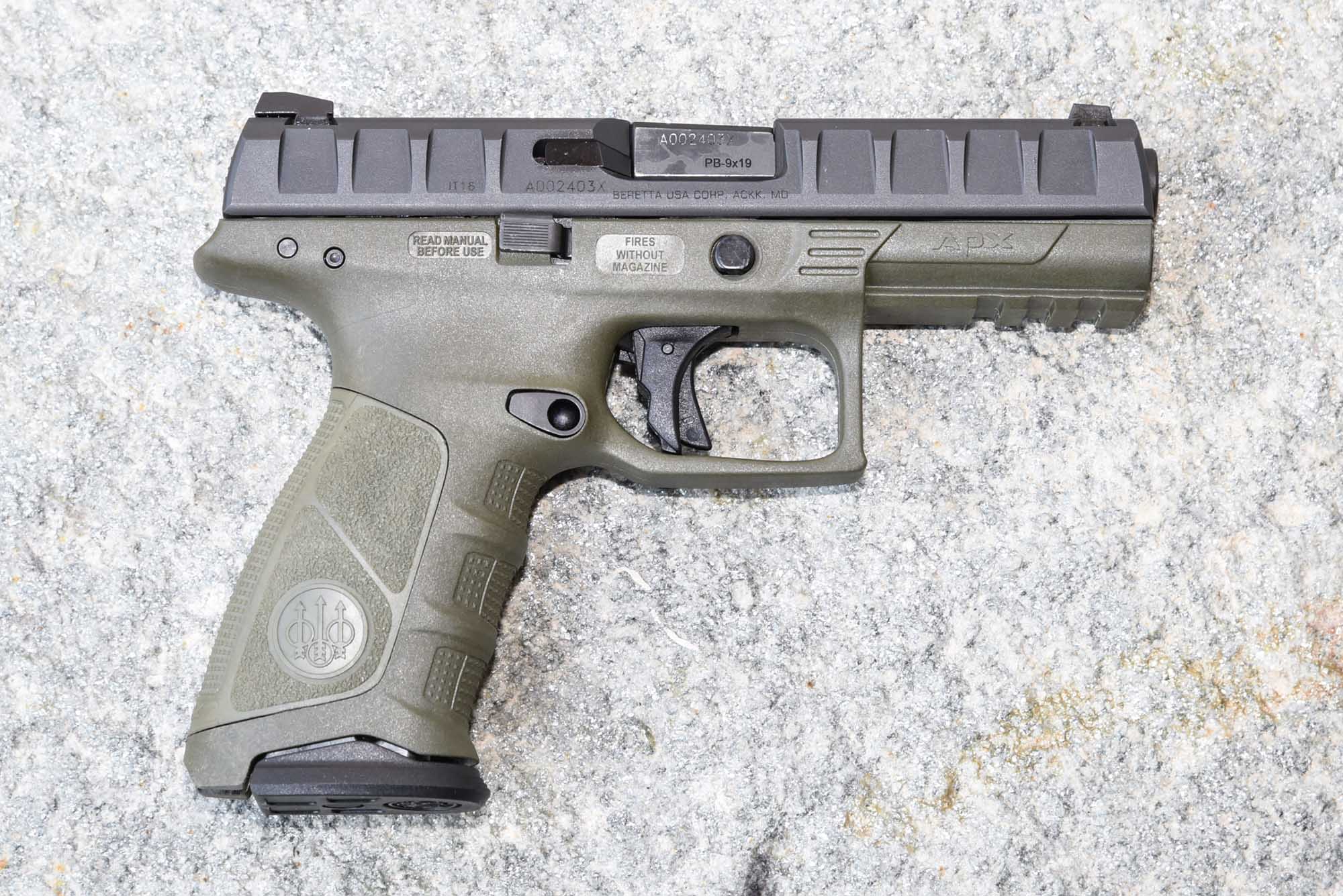 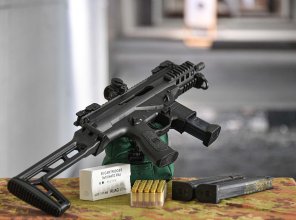 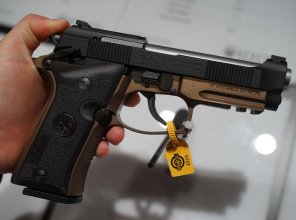 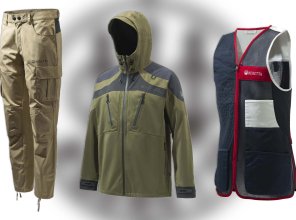 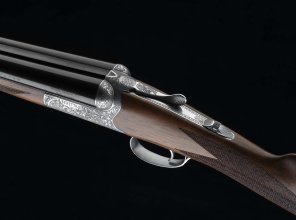 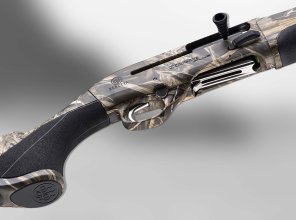 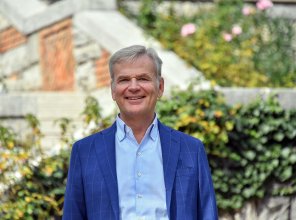 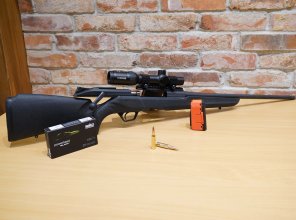 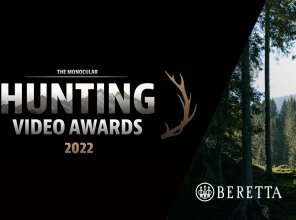