Where did we see this before?... The iconic Hi-Power pistol designed by Browning and Dieudonné Saive is now manufactured in Turkey by Girsan and imported in the US by EAA Corp. Chambered in 9mm, the pistol  features a steel frame and slide and a 15+1 magazine like the original.

A contribution from Piergiorgio Molinari09/03/2021

The Browning Hi-Power pistol seem to be still quite popular in Turkey. After the 9mm ZIG 14, a copy manufactured by the Turkish Tisas we introduced some time ago here on all4shooters.com, another Turkish company rather well-known for its Beretta 92 and 1911 clones – Girsan – is bringing back the legendary model into production under the name MC P35. 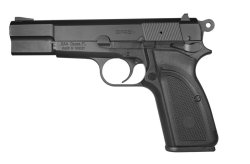 The Girsan MC P35 features a steel frame and slide in a black matte finish. Barrel is  4.87”/123 mm long. Note the ringed hammer.

All gun fans should be already familiar with the Hi-Power, aka HP 35 or GP (Grande Puissance, "high power" in French): it's a a single-action, semi-automatic handgun originally designed as a military pistol by the legendary John M. Browning and then completed by Dieudonné Saive at Fabrique Nationale (FN) of Herstal, Belgium, in the early 1930s.

One of the most influential designs in the history of handguns, in its various iterations the Hi-Power was adopted by several armies around the world. During WW2 it was particularly appreciated not just by the British and Canadian forces, but even by the Germans, who make FN manufacture the gun in the occupied Belgium under the designation "9mm Pistole 640(b).

The civilian market also absorbed many Hi-Powers over the years, so that FN discontinued production only in 2017. More or less exact clones, however, continued to be manufactured in countries like Philippines, Hungary and, lastly, Turkey of course.

Girsan MC P35, “Made with serious respect for the original” 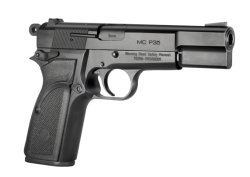 Magazine is flush-fitting, with a capacity of 15+1 rounds. The slim trigger is faithful to the original design.

EAA Corp., importers of select quality and affordable handguns, rifles, and shotguns, is now distributing the Girsan MC P35 in the US too. “Made with serious respect for the original Browning Hi-Power pistol design, EAA’s MC P35 pays homage to one of the most widely used military handguns in the world, with its classic styling,” they say at EAA.

Like the archetype, the “Turkish Hi-Power” features a steel frame and slide in a black matte finish, and the staggered column magazine with a capacity of 15+1 rounds that already made the original HP 35 famous back then. Caliber is the classic 9mm Luger. Barrel is 4 5/8”, and sights include a windage-adjustable rear sight coupled to a dovetail front sight. Extractor is external, and controls include the ambidextrous safety and the magazine release. A magazine disconnect safety is also present.

The iconic design brought back by EAA and Girsan has an MSRP of $528 in the US. At the time of this writing it is not yet known whether the MC P35 will also be distributed in Europe.