Experiment: what happens when shooting with a bulged barrel? We dare to try it!

One of the concerns of a reloader is cartridges without powder, or squib loads. One of the biggest worries is that such a cartridge is fired. And the real troubles start when it happens. In this very unusual test report we take a look at a proven match pistol in the shape of the SIG Sauer P226 X-Six in 9 mm Luger, which we tested despite a damaged barrel. The results? Read them here!

How did the barrel of the P226 X-Six get bulged?

Axel Manthei
We were able to retrieve the stuck 125-grains H&N High-Speed bullet of our PPC match load from the barrel.

In preparation for the 2020 PPC season, we procured a 2 kg can of Kemira powder and a corresponding number of H&N truncated cone125-grain bullets. The 9mm cases were cleaned and actually nothing stood in the way of production. With such a large quantity of cartridges, it is of course sensible to produce and test a small batch before the large series is produced. Since a Ransom Rest was available for this purpose, gun accuracy was also checked. After the first few shots one of the cases was not ejected. Obviously the load  had turned out to be a bit too weak after all. After a few more shots this happened again. When a case remained in the chamber for the third time, it slowly dawned. By shooting from the rest the feeling for the recoil was missing. A short check with the cleaning rod confirmed the assumption. One bullet was stuck in the barrel. And suddenly the suspicion arose that this must also have been the case with the two previous shots. After the bullet was pushed out of the barrel, there was certainty. The SIG Sauer X-Six had two unmistakable barrel bulges. We certainly do not need to explain what thoughts and emotions this triggered.

Virtue & necessity – Why did we test the SIG Sauer P226 with a bulged barrel?

Axel Manthei
From the outside, the two bulges in the SIG Sauer barrel are difficult to see. Here you can see the two support points on a glass plate at the bottom.

But sometimes you can also make a virtue out of necessity. At least according to our research, we had never tested a gun with a bulged barrel before, so we set to work. It must be pointed out at this point that it is strongly discouraged to use guns with a bulged barrel! Our investigations had a purely technical and scientific purpose and were carried out under the necessary safety precautions.

Axel Manthei
These four bullets were taken from the barrel of a Colt Python, which fortunately had no cartridges with powder.

When a bullet hits an obstacle in a barrel, the barrel wall is subjected to extreme stress in that area. Depending on the velocity, gas pressure and the masses hitting each other, the result can range from a slight bulge to cracks and even a massive barrel explosion. The thinner the barrel wall and the closer to the muzzle the obstacle is, the more likely it is that a malfunction will occur. In the classic Colt 1911 system, for example, the barrel bush jams very quickly and the slide can't be moved.

Axel Manthei
The barrel of this Colt Official Police did not withstand the strain of a bullet plug and was torn open.

In our case, the two slight bulges were just behind the chamber and did not interfere further with the function. But you could feel them from the outside. The measurement showed that the barrel had become thicker in these two areas by 0.01"/0.26 and '.007"/ 0.2 millimetres respectively. Due to their irregularities, the lengths of the bulges were difficult to determine. Roughly estimated, they amounted to about 1.18"/3 to 1.96"/ 5 mm on the inside. Besides the question of the cause of the missing powder, we had the chance to investigate two things with the gun: firstly, the influence of these bullet bulges on bullet velocity. The second question concerned the influence of such bulges on bullet stability and the residual shooting performance.

Our test set-up for the investigation about bullet velocity/stability: 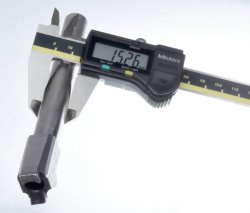 For our tests, we used factory ammunition with bullets of different lengths and thus of different weights. With bullet weights ranging from 95 to 147 grains, we wanted to see whether projectiles with a longer guide length could possibly tolerate the expansions better than short ones. And, of course, we also tested the competition load for this gun. After all, it was previously possible to shoot grouping circles of 3.9"/10 cm at 100 metres (!). For our test of a slightly different kind, the pistol was again clamped into the Ransom Rest and the result was surprising. Contrary to the first assumption, the groupings were still respectable. If there weren't always a few flyers, one would even call them good. If you delete the two worst shots from the hit patterns, you still hold the ten of the precision target with the best three loads. If you consider all ten shots, you still have 48 points on a target with eight tens and two nines.

The original assumption that the guiding length of the projectile has an influence on accuracy was not confirmed. After all, the 95-grain MagTech was the shortest bullet in our test and the 142-grain Winchester full metal jacket TC was the longest bullet in our test. All bullet holes were perfectly round. Thus, tumbling bullets (due to so-called "tipping") were out of question as a cause for the flyers.

To test the difference in velocity, the same ammunition was shot and measured from another SIG Sauer X-Six with an intact match barrel. These results were also surprising – velocity losses were negligible. In the lead with about 3% loss was the light 95-grain MagTech load, followed by about 2% with the heaviest bullet in the test. Also the range of velocities within the individual loads did not change significantly, with the exception of the light 95-grain MagTech. The cartridges with the highest loss were also the ones with the best hit patterns. Thus, the individual flyers were neither attributable to different bullet velocities nor to wobbling bullets. In any case, the loss of velocity had no influence on accuracy. 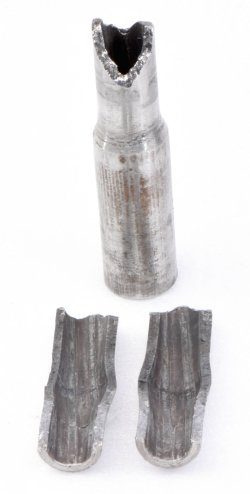 Axel Manthei
If the barrel material is hard enough, a stuck bullet can also cause the barrel to explode.

The exact cause can only be speculated. It is possible that the bullets caused the barrel to vibrate more or less strongly to the side when passing through at the bulge points. In a normal barrel, the bullet moves linearly. However, if the barrel has a bulge, the bullet can also wobble sideways for a short time before it re-enters the normal guiding part of the barrel. Similar to a car driving over a pothole, this could cause the barrel to oscillate additionally. If you consider that a deviation of 0.1° - which corresponds to 0.001"/0.03 mm for a 6"/152 mm barrel length – at 25 meters will cause the bullet to deflect about 2"/5 cm out of direction, this would at least be one possible explanation.

Please do not experiment with damaged guns!

The question whether you should continue shooting with such a barrel must be answered with a clear "no". Such damages do not always end up as in our case. If the bulge is located near the muzzle end of the barrel, the slide often prevents further shooting. If the barrel is exposed, as is the case with revolvers, for example, or if the damage is just before the chamber, the firearm function as such is not disturbed. However, there is always the risk of the barrel showing cracks. In this case, fragments of bullet can escape or the barrel can explode. We certainly do not need to describe the danger this poses. Even if the barrel is shielded by the slide, for example, a correspondingly weak slide guide can break off due to the sudden release of gas pressure or a plastic grip can splinter. And also in other respects the escaping high-pressure gases are not to be trifled with.

Where did the problems with the powder charge come from? 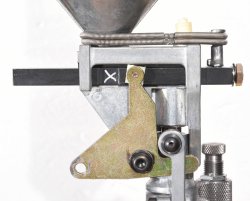 Axel Manthei
The reason for the missing powder was the loose screw on our Dillon 650, which allowed the gold-coloured bellcrank to slip out of the groove (X).

Finally, of course, there is the question of how the cartridges without powder could have been produced. The answer to this question was relatively unusual. On our Dillon 650, the screw for the bellcrank, which moves the powder bar back and forth, had loosened slightly. Although the powder measure was lifted from the case every time during loading, the bar was not always actuated due to play. This small difference and the then missing propellant remained unnoticed.

Shooting with the gun clamped meant that there was no feeling for the recoil, and the expectation of a possibly weak load with ejection problems did the rest. So the next purchases will be a powder check and a new barrel!

Here you can read our test on the SIG Sauer P226 X-Six Skeleton – without damage due to incorrect loading.

Subscribe to the Newsletter
This article is also available in this language:
DEIT
Click here for more information on the topics:
SIG SauerPistols9 mm9x19 mm (9 Luger)Test
That might interest you too: