Ban of lead in ammunition – here is the position of ISSF: "Rimfire ammunition is a special case where replacement of lead is practically impossible"

The International Shooting Sport Federation (ISSF) is the sole controlling body in the Olympic Movement administering shooting sports at world level encompassing its member-organizations, that administer shooting sports on the national level. ISSF is formally recognized by the International Olympic Committee (IOC). What has ISSF to tell us about lead in ammunition as reaction on ECHA’s call of evidence? This info is based on quotes from a strategy paper of ISSF.

all4shooters.com already reported about the attempt of the EU commission to come up with a ban of lead in ammunition. Here you can read, where we are in respect to the use of lead ammunition in so called wetlands.

"The ISSF is committed to its responsibility for up-to-date environmental and nature conservation. The ISSF is composed of those National Shooting Organizations that are members of their National Olympic Committees and recognized by the respective National Olympic Committee as the governing body of the shooting sport related to the ISSF recognized events in the country. Currently, the ISSF has 160 Member Federations from 147 countries of 5 continents. The ISSF organizes World Championships, World Cups and other competitions for the ISSF recognized events for juniors and seniors." 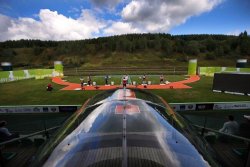 Shotgun shooting is also one of the ISSF disciplines where lead shotgun ammunition is used.

From the presented consumption figures, it can be seen that ammunition occupies a rather small portion of the total lead production and consumption both worldwide and in the European Union. In total, in terms of the interests of the European community, we may evaluate that only 50,000 tons out of 1,400,000 tons of manufactured products are in fact used for ammunition, including the ammunition used for military and police purposes.

Given that another part of this ammunition is intended for hunting purposes, shooting sports are only responsible for about 10-15 thousand tons. Olympic shooting occupies an even smaller part of this amount. Therefore, we can understand that the amounts of lead used in shooting sports are extremely low and are absolutely insignificant from the point of view of their environmental impact.

Fundamental claim of ISSF in respect to the use of lead in ammunition:

The introductory part of the request provides the following summary information about lead, which distinguishes it from other heavy metals: “There is no evidence for a safe threshold critical endpoints, including developmental neurotoxicity and nephrotoxicity. This means that there is no level of exposure below which effects in humans are not expected.”

This claim is perplexing to say the least, since there are hygienic standards (as detailed in the national regulations and the World Health Organization) which have been developed on the basis of the concept of zero risk - meaning that there are no consequences for humans and future generations over their entire lifetime.

For example, the critical level of tap water lead contamination in the USA is 15 μg/l (actions are required if the concentration of lead in 10% of tap water samples exceeds that level [40 CFR 141.80, USA]), the critical level for ground waters in the EU is 20 μg/l. In addition, if the claim is being made that any arbitrarily small amount of lead is dangerous to humans, this makes the request itself meaningless.

An analysis of the availability and technical performance of alternatives to lead in ammunition:

The main alternative considered is the substitution of lead ammunition with ammunition made of steel or other materials (solid copper/brass, bismuth, tungsten). Iron, as opposed to lead, actively decomposes in the environment: while the oxide film formed on the lead shot is so dense that it “passivates” (protects) the surface, a loose oxide hydroxide film is formed on steel gunshot, which is able to effloresce. Micron particles (2.5 μm) are formed as a result, which are very dangerous to the respiratory tract. Iron forms soluble compounds which migrate to soil, groundwater and surface water. In other words, transformation of steel gunshot in soil leads to pollution of all adjacent environments – the atmosphere, underground and surface waters.

There is no iron concentration level established for soil but it is controlled in water (0.3 mg/l in surface waters, 0.1 mg/l in fishery waterways, according to the Russian regulations). Dangerous iron compounds in the atmosphere are dispersions of iron oxide (Fe2O3), but not because of the toxic effect, but because of mechanical penetration of the lungs (this disease is called siderosis – similar to silicosis among miners). For dispersed particles (suspended solids with a size of 2.5 μm) the maximum permissible concentration with daily averaging is 0.035 mg/m3, and, for example, for dust particles (analogue of suspended solids) this indicator is 0.15 mg/m3. There is a separate standard established for Fe2O3 – 0.04 mg/m3 (according to the Russian regulations).

Other toxic iron compounds are iron sulphate (FeSO4) and iron chloride (FeCl3), which can be formed in the environment (in humid air and soil). Special level standards for atmospheric air concentration are established for the following compounds: iron sulphate – 0.007 mg/m3, iron chloride – 0.004 mg/m3 (in terms of the equivalent amount of iron).

Comparative studies by the University of Munich (TUM) have shown that the alternative shotgun and ball ammunition available on the market have far more toxic effects on the environment than metallic lead, especially in wetlands. A toxicity test was carried out on one of the key organisms for these wetlands, the large water flea (Daphnia magna). In these habitats, the large water flea holds a key position in the food chain of the relevant ecosystems. The studies revealed that the zinc and copper ions released by the alternative ammunition materials have a highly toxic effect on this organism, and mortality rates of up to 100 percent were measured in comparison to the control group. In the solutions contaminated with lead shot, on the other hand, the mortality rate was not different from that of the control group.

Lead in ammunition: other long firearms disciplines would also be affected by a lead ban. The ISSF is in favour of lead and has good arguments.

Lead in ammunition: alternative materials or lubricants (nickel, chrome, copper, bismuth) only exacerbate the impact on soil as heavy metals

1. The use of steel (or tungsten) bullets leads to higher health and safety risks due to the increased probability of trauma because of higher ricochet of such bullets and shot.

Other problem of using other metals: the barrels of existing firearms are not constructed for using pellets made of other metals (it is the view of almost all users and manufacturers).

3. The third reason is that lead has ballistic properties which cannot be ensured when using other metals.

4. The fourth reason is that, in some cases, it is impossible to substitute lead with any other material. Rimfire ammunition (mainly in .22 LR or .22 Short calibers) is a special case where replacement of lead is practically impossible – even with much higher cost materials. A rimfire bullet has to expand in the tail part to the dimensions of the barrel (caliber) in the early stage of bullet acceleration (Figure 3), which is impossible with any material harder than lead. Many sports shooting disciplines use only rimfire ammunition (like biathlon and other Olympic shooting disciplines).

5. The fifth reason is the financial costs. In centerfire target shooting (and training for that), the number of shots fired is large (even compared to hunting) and the high cost of alternative materials (solid copper/brass, bismuth, tungsten) very much prevents the use of them. Adequate replacement for lead is only gold, which is incomparably more expensive. Moreover, the large number of shots would make the barrel wear a significant problem in sports shooting with harder alternative materials. The greater hardness of the substitutes leads to an increased strain on the barrels and the locking of the firearm. The higher mechanical stress leads to a faster material fatigue and wear on the firearm barrels. Unfortunately, we do not know any scientific studies on that, but as manufacturers of firearms and ammunition, we confirm that the life of test barrels becomes shorter when used with alternative materials. Sports firearms (pistols and rifles) are rather expensive high-technology tools, and their frequent replacement will adequately increase the costs for athletes.

The EU proposal states that the costs of the proposed restriction would be borne mainly by hunters and sports shooters and that the cost increase would be reasonable for them. This testifies an insufficient study of the problem: apart from the costs mentioned above, it is the shotguns that need to be tested for use with alternative materials for ammunition, not only the ammunition itself. This would require establishing necessary infrastructure which is not available in many of the EU member states.

Also, a huge number of firearms that are built to accept only lead-loaded cartridges will become useless. Who will compensate all those people or who will ensure their safety if they start using other metals in their guns? This is a very huge argument and since there is no scientifically proved evidence that lead pellets at shooting galleries and gunshot at shooting ranges cause any pollution, the European Union must review its thoughts concerning the matter. It is necessary to understand whether the use of alternatives complies with applicable legal principles in all countries (e.g. CIP).

Taking into account the arguments presented above, it seems unreasonable, inefficient, and therefore inappropriate to include shooting sports facilities in the ECHA request (items B and D in the request) in light of the following circumstances:

1.    Shooting sports facilities were quite reasonably not mentioned in the European Commission’s request.

2.    Shooting sports facilities do not affect the environment outside their site.

3.    Shooting sports facilities do not pose risks to human health.

4.    The potential risks that may arise at a facility’s industrial site in connection with the generation of "migratable" lead are manageable (i.e. they can be controlled and neutralized); the produced lead wastes are disposed of.

5. The socio-economic impacts on the development of the shooting sport and its industry have just not been calculated, but are not even considered.

Proposal by ISSF for ECHA and EU Commission:

1.  Remove items B and D as they apply to shooting sports facilities from the request.

2. Before planning the ban of lead, it is necessary to study whether the safe use of alternative ammunition in existing firearms is ensured (system compatibility).

3. Carry out an analysis of obviosly negative socio-economic consequences due to the fact that this ban de facto leads to the unserviceability of millions of shotguns and thus to a quasi-expropriation for a large number of people.

4. Carry out more reliable, thorough and long-term research on health and environmental effects of alternative gunshot materials before the ban of lead could even be considered.

In our opinion, these excerpts from a working paper of ISSF sound reasonable to us and well balanced. We would like to share it with our fans and readers of all4shooters.com as well as parts of the industry to have facts on the table, not just political attacks from EU Comission and ECHA.

You can find the communication from the ISSF on the association's website.

Subscribe to the Newsletter
This article is also available in this language:
DEIT
Click here for more information on the topics:
LawAmmunitionCulture
That might interest you too: