The history of the assault rifle - Part 1: Before the Sturmgewehr

Despite its widespread use, the term “assault rifle” is controversial, mostly because there’s no single agreed definition for it. Still, it has some interesting history that it is worth a look.

The  term “assault rifle”, or rather its German equivalent “Sturmgewehr”, first became well-known during and shortly after World War 2 as a political/propaganda measure on the part of Adolph Hitler (or so legend goes), although both the basic concept and the term itself have a noticeably longer history. 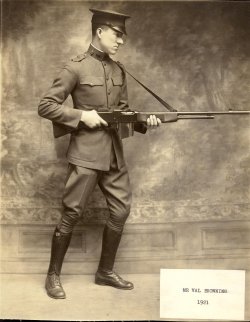 The American BAR M1918 automatic rifle was built following the French concept of “walking fire”. Here it is being demonstrated by the son of its inventor, Val Browning.

The French CSRG m1915 automatic rifle was specifically designed for use during infantry assaults on enemy positions.

The earliest use of a similar term, known to this author, is dated back to the 1918-1920 timeframe, when noted US small arms designer Isaac Lewis (of the Lewis light machine gun fame) designed a series of experimental automatic rifles which he called “Assault phase rifles”.

Both Lewis and Browning automatic rifles were designed to same concept of “Walking fire”, originated by the French in around 1915, and first implemented in the ill-fated CSRG M1915 “Chauchat” machine rifle.

This concept called for a man-portable automatic weapon with its primary use being to provide suppressive supporting fire for infantry during assaults on entrenched enemy positions.

In fact, this concept called for THE “Assault” rifle, but its early implementations, such as CSRG M1915 and BAR M1918 mentioned before, or the Russian Fedorov M1916 machine rifle, had some inherent flaws.

The problem of ammunition

The major source of problems with these “first generation” “assault” rifles was their ammunition. Designed during the late 19th and early 20th century, all contemporary rifle cartridges were quite powerful, with a long range, necessary for suppressive volley fire against large and dense enemy formations - a standard and widespread infantry practice until the mass adoption of machine guns during WW1. This “extra power” resulted in significant recoil, as well as a noticeable weight of the ammunition and of the rifles that fired it, increasing manufacturing and logistic costs and making such automatic rifles harder to use in combat.

The most logical solution to this problem was to reduce the power of rifle ammunition to the level necessary for most (but not all) typical combat scenarios. Traditional rifle cartridges of the era had a “lethal range” well in excess of two kilometers; however, under combat conditions no one can reasonably expect an average soldier to be able to hit a man-sized target at ranges longer than 300-500 meters. Furthermore, decreasing the power of rifle ammunition has several benefits. These include: savings on raw materials, powder, logistic costs per round; increased combat load (in number of rounds carried) per soldier; decreased weight, size and cost of rifles; decreased recoil, which is conductive to increased accuracy; and few others.

The lesson of the US Civil War

The Henry model 1860 magazine rifles were, to a significant extent, progenitors of the modern assault rifle, firing medium-powered ammunition with noticeable rapidity (at least by the standards of the time).

In fact, the concept of “reduced power” military ammunition was used to some extent during the era of black-powder, manually operated rifles. Several armies issued reduced “carbine loads” for cavalry and other non-infantry troops, but closest to the modern concept were American magazine rifles of the Civil war era, such as Henry and Spencer repeaters. Used by cavalry and some infantry units during assaults and skirmishes, these handy guns offered rapid and devastating fire at short to medium ranges, while using noticeably less powerful loads than contemporary single-shot military rifles.

The Winchester M1907 carbine, when fitted with extended magazine and bayonet, and modified for full automatic fire, was a formidable WW1 era fighting weapon for assaulting enemy trenches or defending allied ones.

This “rapid fire carbine” concept was further supported by practical experience gained during the Great War with the French-issued US-made Winchester M1907 self-loading rifles. These semi-automatic carbines were initially bought from the USA by the French army to arm aircraft observers, but machine guns soon replaced rifles in this role. On the other hand, compact and handy carbines that fired a good “stopper” cartridge (.351 WSL, also known as 9x35SR, with round-nosed bullets) were excellent weapons for close combat on battlefield. Fitted with extended magazines (15- or 20-round capacity), bayonet mount and, in some cases, converted to fire in full-auto, these little rifles became progenitors of the modern “assault rifle” concept, which is, in basic terms, an automatic carbine firing reduced-power ammunition. This reduced-power ammunition is also known as intermediate power ammunition (or simply “intermediate cartridges”), as it is less powerful than standard military rifle ammo but more powerful than typical handgun ammo.

The experimental French Ribeyrolles M1918 automatic carbine fired a specially designed intermediate power cartridge from a large capacity magazine. Unfortunately, its design was well ahead of its time.

As early as 1918, several countries began to work along the lines of this “reduced power” concept, including France and the USA. The French attempt was the Ribeyrolles M1918 automatic carbine which fired specially designed 8x35SR ammo, based on the .351WSL cartridge but modified to accept standard 8mm Lebel pointed military bullets. The American attempt, known as the Winchester-Burton machine rifle, also used a cartridge based on the .351WSL. This purpose-designed round was called .345WMR (Winchester Machine Rifle), and used a pointed bullet of approximately 9mm caliber.

During the early 1920s, Switzerland and Italy joined the club of “intermediate power” developers, producing their own cartridges and automatic or semi-automatic weapons to fire them. By mid-1930s several other countries (e.g. Denmark and Germany) attempted to develop their own versions of intermediate power cartridges and automatic weapons to fire them, but none was ever adopted.

To be continued: in the next installment we will look at the WW2 history of the assault rifle, click here for the article.

Subscribe to the Newsletter
This article is also available in this language:
RU
Click here for more information on the topics:
Assault riflesCultureHistorical FirearmsRifles
That might interest you too: 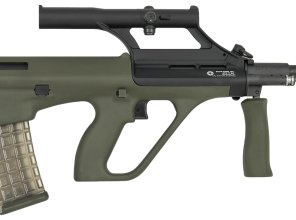 To commemorate the 40th anniversary of the AUG, Steyr Arms has introduced a limited-edition with the look of the original STG 77. The rifle is equipped with a 20” barrel and a 1,5 X scope.