The history of the assault rifle - Part 2: Towards the war

The Germans, with their 7.92 Kurz cartridge and the Maschinenkarabiner (later renamed “Sturmgewehr”), opened the way for the “real” assault rifle. But the road would be long...

In Part 1 we saw how during the 1920s and 1930s several countries attempted to develop their own versions of intermediate power cartridges and automatic weapons to fire them, but none was ever adopted.

And here’s the big question: if the concept was known and found worth researching as early as 1918, why it was not fielded until 1942? There’s no simple answer, but we can speculate to provide some rationale, as follows:

Introducing the 7.92 Kurz and the Maschinenkarabiner

Overall, it appears that most armies of the interwar period considered the “full power” semi-automatic rifle as a next logical step in the evolution of the individual infantry weapons. Some nations tried to create automatic rifles (such as the Soviets with their unsuccessful Simonov AVS-36), but the majority was set on the self-loading only types. One notable attempt to reduce the power of the standard infantry rifle was made by the Americans during the late 1920s - early 1930s, when they tried to replace the old and powerful .30-06 (7.62x63) cartridge with a .276 Pedersen (7x51) cartridge, developed specifically for new semi-automatic military rifles. This attempt was cancelled, though, mostly on financial and logistic grounds.

Despite all these reasons not to adopt reduced power automatic rifles, military experts and industry engineers kept working on the new concept. Among these were the Germans, who took the intermediate cartridge route in 1935. By 1940 the Department of Armaments, German Army (Heereswaffenamt, or HWaA in short), had settled on the 7.92x33 intermediate power rifle cartridge, developed by the Polte company. From the performance point of view, the nominal caliber of 7.9mm was inferior to the originally proposed 7mm caliber, but 7.9mm was chosen for its manufacturing benefits, as new barrels, cases and bullets could be made on existing machinery, originally used to produce barrels and ammunition for standard infantry 7.92x57 Mauser cartridge.

By 1942, two versions of the German MKb.42 machine carbines, the MKb.42(H) by Haenel and the MKb.42(W) by Walther, were tested by Wehrmacht on the Russian front, and the concept was found to have its merits. However, official adoption was delayed by troops requesting some changes (including conversion to fire from a closed bolt as opposed to the original “submachine gun style” open bolt firing), and, more important, by personal orders from Adolf Hitler to cease all development of new classes of small arms. To circumvent Hitler’s orders, the next version of the Machinenkarabiner was renamed to Maschinenpistole (submachine gun, a class of weapons already in widespread service with German army), and entered production in 1943 as the MP-43. Once reports of the MP-43 success at the front reached German Headquarters in 1944, Hitler finally approved mass production of the new weapon and its associated 7.92mm Kurz cartridge, personally christening it “Das Sturmgewehr 44” (Stg.44 in short), which means “Storm” or “Assault” rifle. It was pure propaganda, as at the time Hitler’s’ Germany was all about defense instead of the earlier “Sturm und Drang” attitude. Overall, about 425,000 Sturmgewehr rifles were made for the Wehrmacht before the war ended, and it made a sufficient impression on allied forces to warrant very close examination.

Another unlucky product of the WW1 experience was the experimental Winchester-Burton automatic rifle of 1918. It was unique as it had two magazines, mounted above the receiver in V-shaped configuration. 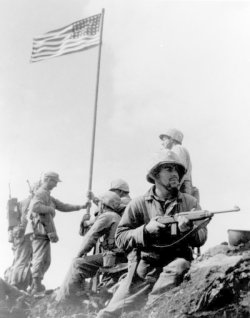 The US M1 carbine, while originally designed as a personal defense weapon, soon became the favorite fighting/assault rifle for urban and jungle combat, thanks to its compact size and light weight.

At the same time (1939-40) the American army issued a request for the development of a “lightweight rifle”, a handy .30 caliber (7.62mm) automatic carbine, with the intention of using it as a more effective replacement for the military pistol. The cartridge developed for this weapon by the Winchester Company, was based on the .32WSL hunting round, and fired a 7 gram bullet at a muzzle velocity of about 600 m/s (muzzle energy 1,300 Joules). Loaded with a round-nosed bullet, it looked more like stretched pistol round than a downscaled rifle round, but it was about twice as powerful as most contemporary military pistol rounds. Shortly after the start of trials the US Army dropped the “full auto” requirement, and the actual M1 carbine, adopted in 1941, was a semi-automatic only weapon. Despite its original concept of “Personal Defense Weapon” being exactly opposite to that of “Assault rifle”, the M1 carbine quickly became popular among fighting troops for its handiness and rapidity of fire. By 1944, it became apparent that a full-automatic version of the M1 would make sense for front-line troops, and the selective-fire M2 carbine was approved for service and put into production toward the end of the war.

By modern ballistic standards, it may fall short of being a “true assault rifle”, but, nonetheless, it was an important historical weapon which deserves honorable mention at the very least.

Click here for the part I of the story od the assault rifle.