Behind the scenes: guests of SIG Sauer – A tour to the plant in Eckernförde

SIG Sauer - A German firearms manufacturer that has managed to achieve worldwide renown. all4shooters.com was on site in Eckernförde, Germany, to take a look behind the scenes of the company, which is one of the market leaders in its segment.

Two words that actually already contain everything you need to know: SIG Sauer. All over the world, sports shooters enjoy their firearms, but SIG's products are also used everyday by various law enforcement and military units, where life may depend on them. The name also appears repeatedly in the media. For example, when the P320-M17 won the tender for the new US Army service pistol. An order that brought SIG Sauer hundreds of millions in sales, or will do so over the next few years. It's precisely this presence, also in the USA, that makes some Americans think that SIG Sauer is a company from the land of unlimited opportunities – yet the heart actually beats in the small community of Eckernförde, in Schleswig-Holstein, Germany. And the purpose of our visit there was to take a look behind the scenes of the firearms manufacturer and to see how much “Made in Germany” is in SIG Sauer.

If you drive into Eckernförde from Hamburg, you could almost miss the company. But the flags point the way to the flat buildings of SIG Sauer. A mowing robot makes its rounds on the lawn. And the surroundings also radiated that certain, homely small-town attitude. But inside, it's different. Even in the open-plan office, you can see that people who work here are in contact with the whole European Union.

What is manufactured at SIG Sauer 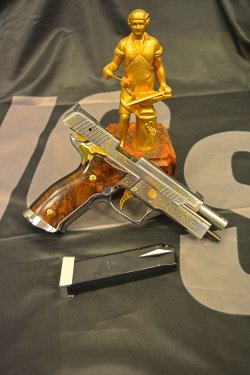 And the company was already waiting: Curt Richard Pautlitz and Dr. Armin Dobat, responsible for marketing at SIG Sauer, took the time to present the Eckernförde plant and, of course, the company. The question that was most urgent was what kind of firearms see the light of day in Eckernförde. The well-known MCX Virtus and other products are made in the USA. But the list of guns manufactured in Eckernförde was quite impressive: 30 different models of the P226 alone are built in Schleswig-Holstein. In addition, there are the P220 X-Six II Classic and PPC, the SP 2022 and rifles such as the SSG 3000 in 5 variants and the TR 200 series, also in different model versions.

A large part of the sports products is still manufactured in Germany. On the way through the production halls with the modern CNC machines, it was noticeable how meticulously the product was handled in every single work step. The running production is located in a separate hall, which is understandable if only because of the noise – even if it is not necessarily quiet in the other halls. This then raised the question of how exactly a gun is made in which individual steps. In a small craftsman's business with a small number of pieces, this may be done in many steps from the same hand. But on an industrial scale, it has to be done differently. "When we produce large quantities, we follow a fixed principle," explained Armin Dobat. "First and foremost, cutting. For us, this means that we process the raw material. For example, the starting material for the slides, which can have a length of four to six meters, is cut to 20 cm. We divide the production into three segments: barrel, grip and slide. After cutting, the barrel and grip are machined, followed by the finishing of the three pieces," Armin Dobat continued. 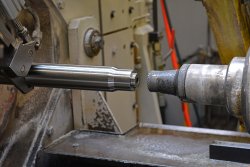 Losert, Alexander
A view of the barrel machining process. There is an enormous noise level in the halls, which makes ear protection necessary.

But that does not close the circle. "The next step is the deburring of the three pieces. All traces of machining are removed. This is followed by finishing and checking that everything fits and has been cleanly machined. After all, like our customers, we attach great importance to quality. Only when everything has been found to be in order does it go on to assembly and then to acceptance. Our quality standards are very high and no gun leaves the factory that has not been thoroughly checked.”

But, and perhaps this is also what makes SIG Sauer so attractive, the company is not only able to mass-produce, but also individually, as was already shown at the IWA 2019. Keyword: the SIG Sauer Mastershop. 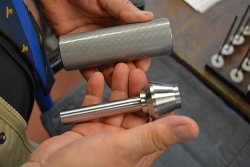 Quality, dimensional accuracy and excellent material for the barrels, both for long and short guns, are of utmost importance in Eckernförde.

In addition to "off the shelf" products, customers can now choose from a wide range of products that allows them to create their own individual gun. This part of the company is divided into three areas. At the Mastershop Sport the customer can purchase ready-made packages or tune them individually, such as the trigger, the sight, the matching barrel weight and other components. The next step up the ladder is the Mastershop Prestige. Different colors, surface finishes, grips or engravings ensure that the customer receives an individually-tailored and unique gun. The Olympus is then entered with the Mastershop Individual. The word "individual" is probably the decisive factor here. They manufacture firearms that are unique in the world according to our own designs and ideas. There are no limits to imagination. A movie-themed gun? No problem! Precious materials? Give it to me! Elaborate craftsmanship? Give the start signal! Already at the IWA 2019 there was the opportunity to see some of these pieces, like the "Pirate-themed" or "Western version" ones. Too bad, actually, to use them for their actual purpose, but SIG Sauer assures that, if you want, you can shoot them as usual.

The world in Eckernförde 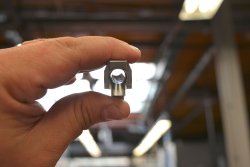 Losert, Alexander
Checking is a must: a glimpse inside the barrel of a SIG Sauer pistol.

The performance show in the two ares of mass and individual production was really worth seeing. But not everything is produced here on site or maintained by SIG's own technicians. "We work together with a number of smaller companies that produce screws and other small parts for us. These are of course also checked at regular intervals to see whether they meet our quality standards," says Armin Dobat when asked whether there are also connections to the local economy. 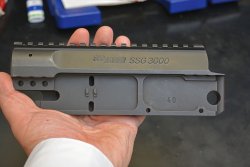 Losert, Alexander
A receiver for the SIG Sauer SSG 3000 – like other products, this family of firearms is also produced at the Eckernförde site.

Even if Eckernförde is probably the deepest province for many people, the heart of SIG Sauer beats here, a group whose products are appreciated by many people in many countries, and thousands of them have to and can rely on them in their jobs. Eckernförde is primarily dedicated to the manufacturing of sports lines. These then go from the small town to the whole EU. SIG Sauer Inc., which has taken on the defense segment among other things, is located In Newington, New Hampshire, in the USA. "But transitions and exchanges are fluid – after all we are all under one roof. The exchange does not only end at technical level – several pistols such as the P320-M17 are also coming to Germany," says Armin Dobat at the end.

Further information on SIG Sauer products can be found on the SIG Sauer website.

Subscribe to the Newsletter
This article is also available in this language:
DEIT
Click here for more information on the topics:
SIG SauerCulture
That might interest you too: