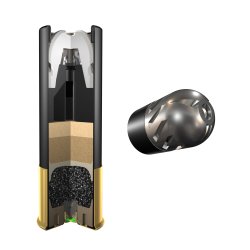 Winchester Ammunition
Much like the earlier PDX1 Defender 12-gauge and .410-gauge loads, the new 20-gauge Winchester Defender shotshell has been specifically conceived for home defense

The Winchester PDX1 Defender line of ammunition, manufactured by Winchester Ammunition − an Olin Corporation company, headquartered in East Alton (Illinois, USA) − has been a top seller on the American and international market for a few years now.

Winchester Ammunition
The ¾oz. slug is "pre-segmented", in that it sports internal and external programmed fragmentation cuts

The latest addition to the Winchester PDX1 Defender line of ammunition is a 20-gauge shotshell with pre-segmented rifled slug; the choice may have been considered odd just a couple of years ago, but quite fitting nowadays with the ever-increasing popularity of 20-gauge shotguns within hunters and sports shooters.

With the introduction of a 20-gauge load in the PDX1 Defender line, Winchester Ammunition provides all those sportsmen who use 20-gauge shotguns for hunting (mostly boars) and for a plethora of sports shooting specialties with a viable load to rely upon should the day come when their sports shooting or hunting instruments will need to be used to defend themselves, their loved ones, their households or their properties against violent, unprovoked, criminal aggressions. 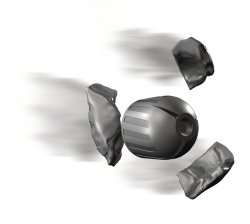 Just like the previous 12-gauge entry in the Winchester Ammunition PDX1 Defender line, the Winchester Defender 20-gauge shotshell sports a 70mm/2.¾" case and has been optimized for reliability and performance, with features such as a high-brass design case base for enhanced resistance and a new wad providing recoil reduction capabilities.

The payload of the new Winchester Defender 20-gauge shotshell is a ¾oz. (21,26 grams, approximately) rifled slug, featuring a slightly hollow point and specific notches on the inside and the outside which provide a pre-programmed segmentation.

The slug travels at around 1600 feet-per-second (487,68 metres per second) and will segment upon impact in three perfectly symmetrical shards, delivering greater knock-down power than traditional buckshot loads and providing aim error compensation and higher penetration for wider wound cavities and thus an even higher terminal performance, while at the same time reducing the chance of stray projectiles in confined spaces. 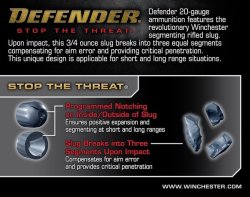 Winchester Ammunition
The load design allows the Winchester Defender 20-gauge shotshells to provide the range and accuracy of a rifled slug and the stopping power and wound channel of a#00 buckshot, or even more!

Winchester's new PDX1 Defender 20-gauge shotshells with segmenting rifled slugs are currently available in the United States of America in 5-shells boxes, each sold at a street price that can be as low as $7.69 each, depending from local availability.

As of today there is no word concerning export and/or international availability outside of the United States of America; prospective non-US buyers should address all questions concerning local availability and pricing to their national authorized distributors of Winchester Ammunition products, keeping in mind that the availability of the ammunition PDX1 Defender loads in many Countries may be crippled by local laws and regulations prohibiting the use of expanding or frangible ammunition for defensive purposes.